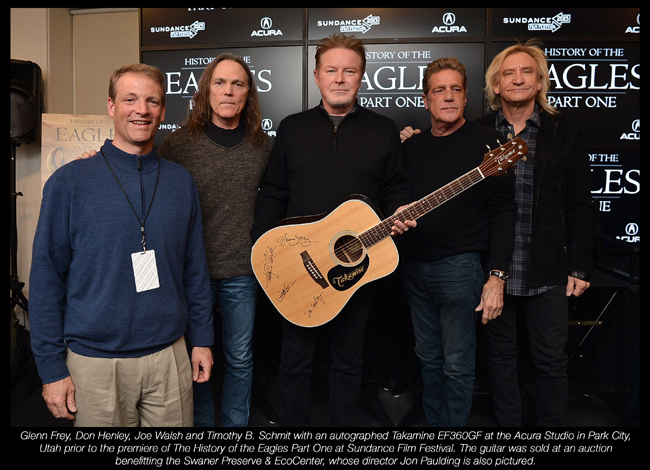 Multi-Grammy-award-winning rock band the Eagles premiered History of the Eagles: Part One at the 2013 Sundance Film Festival. It’s a fully authorized, feature-length documentary providing an intimate look into the history of the group and the legacy of its music. Festival sponsor Acura launched an online “Eagles Guitar Auction,” featuring a Takamine EF360GF Glenn Frey model acoustic guitar signed by Frey, Don Henley, Joe Walsh and Timothy B. Schmit, to benefit the Swaner Preserve and EcoCenter. That’s an environmental organization based in Park City UT.

“Takamine is proud of our long association with this iconic band,” said David Vincent, Artist Relations Manager for Takamine. “We look forward to the general release of History of the Eagles.”

History of the Eagles makes its broadcast debut exclusively on Showtime. Part One airs on Friday, February 15, and Part Two will premiere on Saturday, February 16.

The Swaner Preserve and EcoCenter’s mission is to preservethe land and the human connection to the natural landscape, to educate the local and broader communities about the value of nature, and to nurture both the ecosystem and the people connected with it.