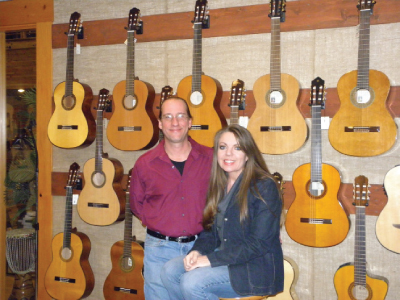 Rand Cook joined The Candyman Strings & Things in 1990 and worked his way up in different managerial positions until he and his wife, Cindy, who had a background in marketing, eventually took it over in 2009. The store started in 1969 in a 200-square-foot space, operated by the original Owner, Matthew Schwartzman. An electrical fire caused a mark in time for the Santa Fe community with the burning of The Candyman store. The store’s roots expanded from musical instruments into recorded music…selling albums, tapes, eight-tracks and CDs. The musical instrument end was what interested the Cooks, though.

Cindy’s business and marketing degree from the University of Denver was utilized, along with her own entrepreneurial experience and knowledge of designing company logos and stationery. She worked with the educational aspect of the store, which, in tandem with Rand’s music expertise, made a great mom-and-pop business partnership.
Although their rental fleet is small, since the Santa Fe Unified School District owns its own rentals, the Cooks still became a Conn-Selmer dealer, as well as an affiliate of another rental company. Rand stated that they are now the only music store in Santa Fe that has outlasted the others. They carry lines such as Fender, Zildjian, Martin and Taylor, among others.

Music Teachers Reception
They have survived due to community outreach to education programs and schools’ band instrument servicing. They host a music teachers reception and provide $50 gift cards to 50 to 60 music teachers. They advertise on local radio programs, social media Web sites and e-mail lists to promote this yearly event. It gives the teachers a little boost to help with purchasing needed accessories for their classrooms.

Rand also states they have made it a warm and friendly environment for parents by providing an in-house café, so they can relax and have a cup of coffee or work remotely via WiFi while their children are taking lessons.

They were awarded a $25,000 grant from the Small Business Administration and used those funds to develop five private teaching studios and two large ensemble rooms. After taking courses at NAMM University, Cindy came back with a great idea: to hold classes in the ensemble rooms. They now have a ukulele club, a drum clinic, a guitar ensemble, choirs and a summer rock camp. The summer rock camp is available for eight- to 18-year-olds to learn songs, form bands and just have fun. They host about 60 students in two morning sessions and two afternoon sessions for a two-week period.

The Cooks are not too worried about the big-box stores, which are a one hour’s drive to Albuquerque. They work with an independent store in Albuquerque to refer to each other if they do not have a product in stock. The Candyman is willing to match another store’s price or an Internet price as long as it can be verified. Occasionally, they will have someone who purchases an item off the Internet who comes in seeking advice. They are smart in charging a fee for their unique knowledge on how to operate the item. They remind customers that, by shopping locally, they are helping to pay the sales taxes that pay for roads, lights and other New Mexico state improvements funded through government coffers. Rand feels the government made a ‘boo-boo’ in not requiring interstate taxation and is very vocal about it in his community.

Guitarland
The Candyman is involved in NAMM through NAMM University and the “Wanna Play” experience. They set their program up in conjunction with the date of NAMM’s Wanna Play week through advertising on radio, flyers, posters and social media outlets. At the store’s one-day Wanna Play event, each person is given a punch-card “passport” to go to “Guitarland,” “Band and Orchestraland,” to take a free mini-lesson or to go to the “Instrument Petting Zoo.” They let the local Chamber of Commerce members get a sneak peek the night before. The Candyman Strings & Things was also the recipient of several awards this year during the Top 100 Dealer Awards at Summer NAMM. Cindy reported that they won Best Merchandise & Display, Best Rock School & Summer Rock Camps and the Wanna Play “Music Makes A Difference” Award. Last year, they won Best Use of Social Media.

The Future Is Good
As far as the future of The Candyman, things are good, with slow but continuous growth. Education is strong, and there is lots of room to grow. They are three years into their helming the store. The rock school will be expanding. Although Cindy had no background in music, her estimable background in business and marketing has been a real boost to sales and the bottom line. This creates a great mom-and-pop environment, with each giving their all of what they know best.

Crazy Customer Support
Not to disappoint the people who think it is a confectionary business, they do keep some candy around for sales, as the term Candyman can have different meanings depending upon your age group. They also thought it a bit odd that one woman complained that her son had signed up for the summer rock band program and was expected to learn rock music. He had no interest in learning an instrument and wanted to sing a cappella. He felt rock music was too loud. They graciously refunded her money.
Be sure to stop in and say hi to The Candyman if you’re ever down in Santa Fe!