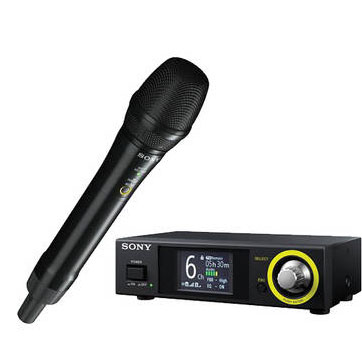 Sony is a company whose name has become synonymous with high-quality technology that covers a spectrum of product categories, from televisions to PlayStation to Blu-ray players to personal audio products. And even that is only to scratch the surface of what the company—founded in 1946 (the name “Sony” bowed in 1955) and headquartered in Tokyo, Japan—brings to market. Here, we’ll be zeroing in on Sony’s contribution to the wireless microphone sphere, focusing in particular on the company’s DWZ Wireless Microphone Series, the two most recent additions to which we’ll explore in depth. The Retailer spoke to Shigeru Inoue and Takashi Ohta, who were two of the principal developers on the Sony DWZ design team, to gain insight.
“When it was first introduced in 2012,” Inoue began, “Sony’s DWZ Series marked the company’s re-entrance into the MI market for the first time in 10 years.” Sony’s goal with these packages was to provide a wireless solution for small to mid-size applications that combined good sound quality, stable transmission, and enviable performance and durability. The 2.4GHz DWZ Series includes combinations of handheld mics, body pack transmitters, and rackmount or compact size receivers; they are ideal for musicians, in particular guitarists and vocalists. The series’ newest musician-friendly packages are the DWZ-B50I instrument set and the DWZ-B50GB guitar set.
“With the DWZ Series, we really focused on finding the right balance between cost and performance,” Ohta explained, “and we’ve [tried to] design features that customers can really get excited about.” Each set offers 24-bit linear PCM digital audio transmission; two selectable RF modes and Sony’s unique data processing for reliable RF transmission; a five-band equalizer; and robust metal body transmitter. The DWZ-B50I instrument set includes a cardioid condenser microphone with flexible gooseneck and two-way clip for use with trumpets, saxophones and other wind instruments. The DWZ-B50GB guitar set also includes a cable tone generator for matching the sound from wired and wireless systems. Serving to distinguish the new packages are their sleek design and contemporary look, highlighted by