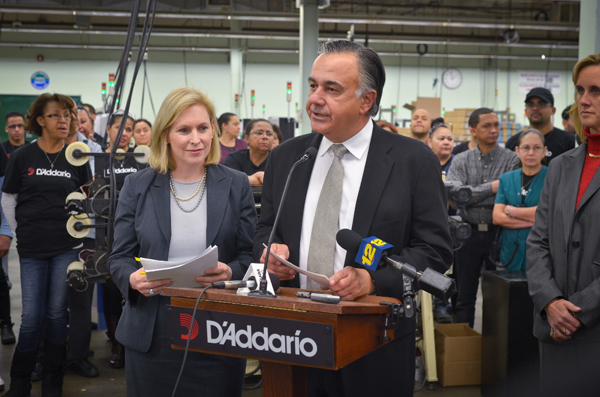 Standing in the factory of Long Island NY-based D’Addario & Company, Inc., U.S. Senator Kirsten Gillibrand (D-NY) announced that the first piece of legislation she introduced in the 113th Congress is a federal funding competition that encourages states and regional public-private partnerships to design and implement comprehensive strategies that spur growth for local manufacturing industries, and that train workers with the skills that businesses need. New York State has been hit hard by manufacturing employment loss, with more than 123,000 manufacturing jobs lost since 2005. On Long Island, nearly 17,000 manufacturing jobs were lost since 2001.

To bolster more growth in New York manufacturing, Gillibrand’s bill, called the Made in America Manufacturing Act, would create a competitive program that awards states and regions with funding to support local manufacturers through low-interest loans to build new facilities and upgrade equipment, access to capital, and technical assistance to develop exporting opportunities and to connect innovative small suppliers with larger companies. Funding would also go toward job training and vocational education programs that partner businesses with colleges, local workforce centers and other skill providers to prepare workers for manufacturing jobs.

Senator Gillibrand’s first piece of legislation introduced in the new Congress would award up to $20 million in competitive funding for each statewide or regional manufacturing hub.

In 2008, D’Addario began a Make It Here program in response to the recession. At that time, D’Addario made about 85% of its product in the United States, but the remaining 15% was being made overseas. By partnering with local subcontractors and implementing Lean Manufacturing techniques, D’Addario was able to source some of its largest selling Asian-made products on Long Island. Today, 95% of D’Addario’s products are made in the United States.

“This legislation would make doing what we did over the last four years much easier for more manufacturing companies,” stated Jim D’Addario, CEO and Chair of D’Addario & Company. “In the past, several Long Island-based injection molders that manufactured parts of our finished products had to make their tooling in China and then ship it here to be competitive; but with legislation like this, we can bring that highly skilled work back to our shores and increase the availability and presence of American-made products both here and abroad.”