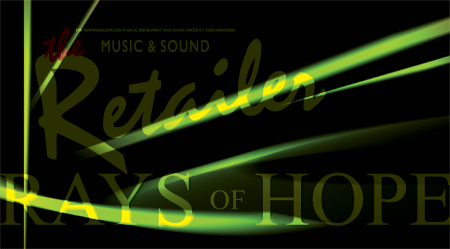 Summer NAMM Strengthens, But 2013 Is The Real Test

Music City was rocking and rolling in July as it welcomed thousands upon thousands of music products retailers, manufacturers, distributors, reps and players to the Nashville Convention Center for Summer NAMM, the gigantic winter show’s smaller, yet still beloved, sibling. The Music & Sound Retailer was there in full force and, from this writer’s perspective, this year’s show was markedly stronger than last year’s was, with the exhibition hall seeming to be more consistently crowded, feedback that was more positive from manufacturers, a larger number of evening events and parties, and a general vibe of enthusiasm. The final point was, perhaps, partly due to the eager anticipation of next year’s move to the yet-to-be-finished Music City Center; in a sense, the move seems to signify a “rebirth” of Summer NAMM, and one that, I hope, will restore the show to the heights it once occupied.

On the show floor.

From networking with current vendors and scoping out new brands to learning at NAMM U sessions and taking in the Nashville nightlife, the music industry certainly stayed busy during the three days that Summer NAMM occupied Nashville. Beyond the thousands of musical instrument and product showings at Summer NAMM, the show provided association members with dozens of complimentary professional development programs, the Top 100 Dealer Awards (more on that later!) and an opportunity to hear live music nearly around the clock while in Music City. And, judging by the numbers that NAMM released, the plethora of activity was just too much for most of us to refuse.

The Numbers
Summer NAMM saw more retail owners, buyers and employees doing business at the show this year, with the number of retail buyers increasing a robust 20 percent year over year. According to Chuck Surack, President and Founder of Sweetwater Sound, “This show is incredible. I wouldn’t miss it. It’s a great opportunity to do business and see friends.” He added, “There are lots of new vendors and products here that I wasn’t aware of…lots of new things that I wouldn’t have seen if I hadn’t been here. This is the time to foster relationships not only with current vendors, but also with fellow music store owners.”

The manufacturing side mirrored that energy and growth, with a nine-percent year-over-year increase in exhibitors. Many new and returning brands contributed to that impressive achievement. In total, 372 exhibitors, representing many more brands, shared new products with buyers from around the world at Summer NAMM. In the words of Mike “Monte” Montefusco, Director of Sales at Taylor Guitars, “[The company] attends Summer NAMM to thank our dealers for their support in the first half of the year, to see East Coast retailers who may not always make it to Anaheim and, finally, it’s a wonderful reason to visit the great city of Nashville.” He added, “The pace here in Nashville lends to spending more one-on-one time with prospective dealers.”

Although Summer NAMM is officially a three-day event, more than 100 retailers arrived in Music City a day early for NAMM’s inaugural Retail Boot Camp. Bob Negen, a retail expert, led an all-day educational session that featured practical advice, covering business planning, marketing and other areas, that was tailored specifically for independent music instrument and product dealers. Tracy Leenman, Owner of Musical Innovations, who attended the Boot Camp, said, “I thought it was very well organized and the information applied to everyone sitting in the room—big business, small business, school business and combo business.” The more relaxed pace of the summer event enables greater attendee focus on educational opportunities. Each morning opened with a NAMM U Breakfast session; guests included Chip Averwater of Amro Music Stores, author of Retail Truths, as well as Joe Calloway, author of Becoming a Category of One. Also on offer was the “Best in Show” awards presentation on the final day.

Top 100 Dealer Awards
The Top 100 Dealer awards, which NAMM bestowed on July 13, serve to honor excellence in music products retailing, allowing the mom-and-pop businesses that are the lifeblood of this industry to have their moment in the sun. Beyond merely recognizing outstanding businesses, though, the awards also reinforce industry best practices, thus ensuring that other retailers have a guiding light in maximizing the effectiveness of their own stores. If you want to see the full list of the Top 100 Dealers, check out http://www.namm.org/news/press-releases/namm-announces-top-100-dealers-music-products-and.

Fishman And Asterope
Anybody who reads these pages monthly knows that Fishman and Asterope are among the most innovative and intriguing companies in the MI business. Well, they had what might have been the show’s biggest headline-news announcement. On July 12, Fishman and Asterope announced a strategic alliance and global distribution agreement establishing Fishman as the exclusive worldwide distributor for Asterope instrument and XLR audio cables for the musical instrument and pro audio markets. As a result of the agreement, Asterope products will be available in retail outlets throughout the United States and in more than 70 countries worldwide. Asterope products will be offered in two product lines: the “Pro Studio” series, available in Asterope’s signature purple color with gold connectors, and the “Pro Stage” series, available in midnight black with nickel connectors.

“This is an exciting opportunity for Fishman to expand on its commitment to provide the best possible sound,” said Larry Fishman, President of Fishman. “We’re delighted to be able to offer our experience and expertise, and look forward to making Asterope a success around the world.” And, according to Dariush Rad, President of Asterope, “Today’s agreement is a tremendous milestone for the company and will better ensure that Asterope products are available to artists around the world.” He added, “Not only are both of our companies focused on enhancing the quality of sound, but our brand building, marketing and strategic sensibilities are consistent, as well. This provides us with the foundation of a dynamic and enduring relationship.”

Partying With American DJ
Friday the 13th of July turned out to be a lucky day. Why? Well, the guys at American DJ definitely know how to throw a party, and they made everybody’s Friday night a whole lot more fun with The American DJ Summer NAMM Dealer Appreciation Party, held at The Stage On Broadway. The venue, nicknamed “Nashville’s Most Rockin’ Country Club,” might not be the kind of place to host a jock from clubland, but the open bar, live entertainment and good conversation with great people made the event one of the after-hours highlights of the entire show. The team from The Retailer was there in full force, enjoying all the fun after a productive day on the show floor.

Speaking personally, one of the best moments of my Summer NAMM experience was having the opportunity to sit down with Joe Lamond, President/CEO of NAMM, and pick his brain about not only the success of this year’s summer show, but also the breakout potential of next year’s show in the new Music City Center, which will sit just south of Broadway on a 16-acre site. During our discussion, Lamond’s commitment to Summer NAMM seemed unshakeable, which, quite honestly, was music to my ears.

The Retailer is, and will remain, a strong advocate for Summer NAMM, and that’s quite simply because we hear from you, our readers, and you tell

us that the show has tremendous value to the music products retailer community. Indeed, during last year’s Independent Retailer Roundtable, some participants were somewhat indignant about manufacturers skipping the summer show. After all, they said, they left their store for three or four days, traveling hundreds of miles in some cases, for the express purpose of meeting with the companies that stock their shelves. “I’m here,” these retailers said rhetorically, then asking, “Why aren’t you?” The chicken-and-egg inertia of who brings whom—the dealers causing more manufacturers to exhibit, or the manufacturers causing more dealers to attend—must be broken. Summer NAMM is a crucial bridge between winter shows, and it comes at a time of year when the back-to-school season, as well as the holiday sales period, is right around the corner. Not to take advantage is a potentially costly mistake.

Before NAMM returns to Music City, the NAMM show stages in Anaheim CA from January 24 to 27. Then, it’s back to Nashville for Summer NAMM from July 11 to 13. The Retailer will see you there!