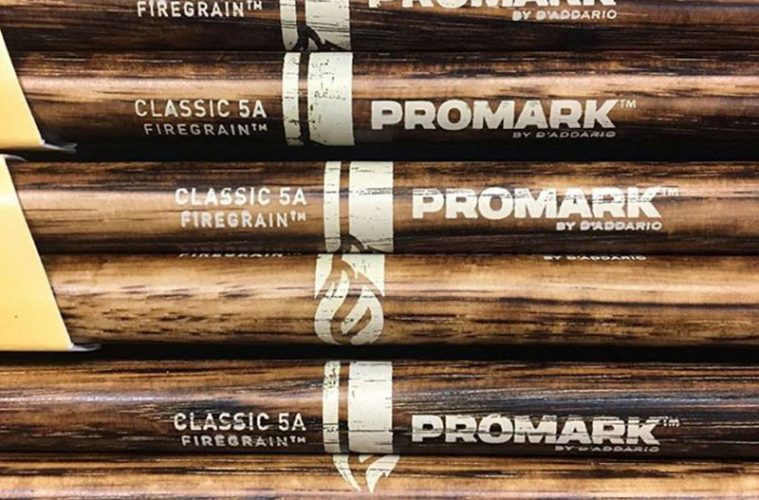 Generally speaking, fire is not great for wood. However, when applied using the proper technique, fire can actually strengthen wood or make it malleable enough to be shaped into our favorite instruments and accessories.

Promark by D’Addario learned the dual effects of fire on the manufacturing process firsthand in 2014, when flames consumed the company’s old sawmill in Prospect, Tenn. While the blaze was a tragedy for the company in the short term, it led to the opening of a new 75,000-square-foot sawmill in Elkton, Tenn. It was also the spark that ignited the idea for Promark’s innovative new line of drumsticks: FireGrain.

“Inspired by the devastating fire at D’Addario’s previous sawmill in 2014, the Promark development team began researching a new way to increase wood strength using open flame,” revealed Elijah Navarro, product manager for Promark. “Some early findings pointed to other industries using flame-tempering techniques to harden baseball bats and hammer and axe handles, as well as arrowheads. One in-depth search turned out an ancient Japanese wood-hardening and preservation method that originated in the 1700s: Shou Sugi Ban. This method is still popular in the construction industry. Its benefits include enhanced durability, UV ray protection, improved longevity and the repelling of insects.”

With these historical and contemporary applications of open flame in woodworking in mind, the company devised its own flame-powered method of strengthening and preserving wood. “Promark’s proprietary and patented flame-tempering technique was developed by D’Addario’s in-house engineering team,” explained Navarro. “Each drumstick is individually passed through a flame tunnel and receives an exterior char. In addition to creating a unique aesthetic, the open flames crystalize trace amounts of tree sap resin that remain in each stick, which builds an ‘exterior armor.’ This delays denting, chipping and fraying, which ultimately prolongs the life of each drumstick.”

Thanks to this unique flame-tempering technique, the FireGrain product line offers superior durability over typical hickory drumsticks. “Generally and conservatively speaking, players can expect a pair of FireGrain sticks to outlast two pairs of their standard hickory stick,” said Navarro. “FireGrain is well-suited for all styles of music and playing styles. However, the greatest benefit will be realized by drummers who play heavier styles of music that require heavier hitting.”

FireGrain drumsticks are made from hickory dowels that are manufactured at the new Elkton sawmill, which is capable of two times the dowel output of its predecessor. This allows Promark a high degree of control over the materials that are used to create its products — right down to the selection of individual logs.

“The sawmill is located in the heart of the Appalachian hickory region in Tennessee, where 90 percent of the world’s American hickory comes from, and it is the only sawmill in the world designed to optimize the output of drumstick wood,” said Navarro. “All other sawmills are slaves to the larger industries they serve, which include flooring, construction, furniture, agriculture and more. Given that drumstick dowels represent the smallest demand across all industries, it’s commonplace for drumstick dowels to be the lowest in the priority hierarchy. Promark has the advantage of selecting only the most premium logs to yield the most premium dowels, which ultimately are processed into finished, premium drumsticks. Having full control over the raw materials as far upstream as the log itself allows us to have the greatest degree of consistency, from the forest to the stage. With the advancements in dowel selection at the sawmill combined with the flame-tempering process, FireGrain proves to be the most durable hickory drumstick Promark has ever made.”

Navarro pointed to some other unique features of Promark’s manufacturing process that contribute to FireGrain’s high degree of durability and quality. “High-capacity kilns are also part of the sawmill process, in which wooden square dowels are dried to the ideal moisture content before being turned into round dowels,” explained Navarro. “The kiln process removes or restores moisture content in the wood. Because Promark dictates its own production timelines, moisture is removed at a low temperature and at a slow rate. It takes about twice as long to yield a full kiln’s worth of wood, but it ensures a more stable piece of wood, which helps guarantee a straight, durable drumstick.”

He added, “The Promark factory, located in Houston, utilizes a centerless grinding process to finish premium dowels into premium drumsticks. Ninety-five percent of the industry uses back-knife lathes, which causes tremendous stress to the dowel and the drumstick and creates much inconsistency from stick to stick. While FireGrain sets a new benchmark in durability, consistency in feel from pair to pair proves to be another industry-level-setting advancement. The longstanding industry challenge for drumstick manufacturers has been addressing the natural weight variation in hickory. Currently, any given drumstick model can range up to 40 grams from pair to pair. Promark’s raw material control capabilities at the sawmill allow FireGrain to put this challenge to rest once and for all by limiting the weight variance to an indiscernible six grams from pair to pair. What this means for drummers worldwide is that each time they purchase their favorite FireGrain model, they can expect a virtually identical-feeling pair of drumsticks.”

FireGrain drumsticks are available in the following models: Classic 7A, Classic 5A, Classic 5B, Classic 2B, Rebound 5A, Rebound 5B, Forward 5A and Forward 5B. All models carry an MSRP of $22.60.