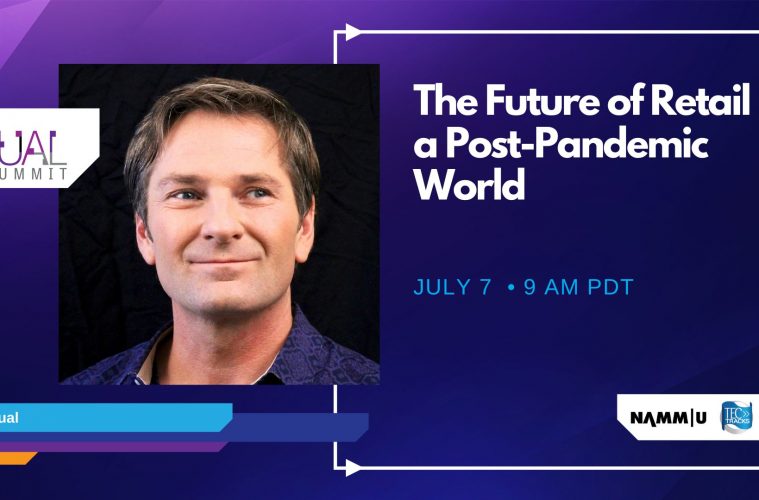 Although some lessons can be learned from the past that can be applied today, we are “traveling down a tunnel and don’t know where the end is” regarding COVID-19’s affect on retailers, said futurist Doug Stephens during his NAMM U Virtual Summit’s keynote address titled “The Future of Retail in a Post-Pandemic World.”

The man known as the “Retail Prophet” noted that the only real correlation to today was in 1918, when the Spanish Flu pandemic infected an estimated 500 million people worldwide. Although it struck with full force in 1918, it wasn’t until 100 years ago, 1920, until the economy tanked, noted Stephens. And it took five years to recover economically.

“This truly is unprecedented,” Stephens told NAMM president and CEO Joe Lamond during the July 7 online Zoom event. “Plan for the worst scenario. We do not know when the vaccine will come. It could be this fall. It could never come.”

“What if this is an extended normal and not the new normal?” he asked.

Hopeful, Lamond asked Stephens how MI retailers can survive during the period taking place now until the date a vaccine is a readily available.

“My assumption is it will be 12 months until there is widespread availability of a vaccine,” said Stephens. “The economy will run at 70 to 80 percent [capacity] during this time. This may not seem bad, but the problem is expenses cannot go down anymore [for retailers].”

The Canadian futurist added that COVID-19 attacks businesses the same way it attacks humans, by seeking out weaknesses and looking for “underlying conditions.” But as a business, there are ways to fight back. One way is make appointments for customers to visit MI stores. “People who come to the store for an appointment are serious and closing rates are high,” he said.

Another way to boost business is to tap into the entire world that is available not just for sales, but lessons as well. “Your market is the world now,” said Stephens. “You can have lessons with people as far away as Asia and Africa.”

Taking advantage of current trends is another approach retailers can take, he stressed. One is the need consumers have today for distractions from the negatives being posed by the world. “Music is a beautiful form of distraction,” relayed Stephens. “The good news is you are in the right category. You are not selling men’s watches right now.”

Confidence in online shopping is another major trend. “We tend to get mired in the now. COVID-19 has been a catalyst to drive music retail into the digital era,” Stephens stated. “It can be seen with online grocery shopping. Eight-five-year-olds are now ordering groceries. And a study revealed 63 percent of consumers said they will buy online groceries moving forward.”

Above all, MI retailers must make sure they do what they are best at, as opposed to trying to do everything for everyone, Stephens stressed. And retailers can no longer say their “business does not play well online.”

“Your value has to be crystal clear,” he said. “Consumers always wonder if they can get the same product online. You must specialize in an experience far and away better than what a consumer can get elsewhere.”

Stephens cited Norm’s Rare Guitars as an example of a retailer providing a special experience. “It is all about the experience. I watch Norm’s videos all the time,” he said. “You have to be at the level of your game where you become notorious.

“Make customers feel they are part of your culture,” added Stephens. “Make them part of your brand. Indoctrinate them in it.”

Successful retailers and brands during the COVID-19 pandemic are ones that focus on the customer first and foremost, continued the futurist. “What can you do to make customers feel better instead of thinking about making yourself feel better?” Stephens asked.

Although the world is of course suffering from a terrible pandemic, Stephens concluded on a high note, revealing the future looks bright for retailers post-COVID-19.

“There will be a period of prosperity following the crisis,” he said. “People will want to reward themselves for surviving the crisis.”

In the meantime, look for opportunities that are presenting themselves now but may never do so again. The Retail Prophet cited the story of Adolph Zukor, a Hungarian who emigrated to the United States as a teenager and bought movie theater chains as they were dying during the 1918 Spanish Flu Pandemic. The move was a huge success and he later was one of three founders of Paramount Pictures.

“He saw an opportunity. There could be opportunities in front of us right now,” concluded Stephens. “It takes a lot of courage to lift your head out of the bunker [and make such a move].”