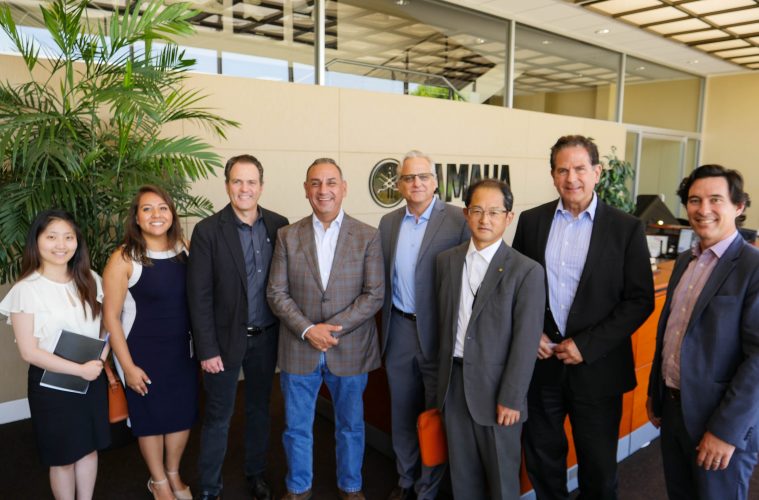 State Sen. Bob J. Archuleta and U.S. Rep. Gilbert R. Cisneros, Jr., who represent the city of Buena Park in the California State Senate and U.S. House of Representatives, respectively, met this week with senior management at Yamaha Corporation of America (YCA) headquarters on a number of topics of common interest, including support for music education and efforts to help suffering veterans.

The meetings were intended to explore in greater depth the company’s pursuit of its role as a good corporate citizen in the region, its support for the local economy in terms of jobs and tax revenue, and how Yamaha may work more closely with the State Assembly and U.S. Congress to further these goals. Yamaha representatives first met both Sen. Archuleta and Rep. Cisneros, whose respective districts contain YCA headquarters in Buena Park, as part of this year’s Stand Up 4 Music Day in Sacramento and the NAMM annual Music Education Advocacy D.C. Fly-In, which takes place in Washington D.C.

Sen. Archuleta visited first with YCA President Tom Sumner and other senior leadership on Monday, July 29.  Following an overview of Yamaha and an update on the company’s future plans to bring further jobs and revenue to the district, the senator was treated to a tour of the YCA campus.

“I was very impressed with the tour of Yamaha Corporation of America’s headquarters, which I am proud to say is located in the 32nd Senate District,” Archuleta said after the meeting. “Not only does Yamaha produce an array of excellent instruments, from pianos to guitars, saxophones and many others used by professional and amateur musicians alike, but I was also captivated by the strong philanthropic component to the company through its Yamaha Cares foundation.”

YCA hosted Rep. Cisneros two days later on July 31 for a similar meeting and campus tour with Sumner and the Yamaha leadership.  At the end of his visit, Cisneros said, “Yamaha Corporation of America is not only a dynamic part of our local economy — employing hundreds of our neighbors in good paying jobs — but also provides essential support to veteran programs, arts in schools and the next generation of musical artists.”

During both meetings, topics important to the company and the community were explored, including the importance of music instruction and appreciation as a crucial component of a well-rounded education. Both Archuleta and Cisneros voiced support for robust funding for education, and YCA expressed eagerness to work with their respective legislatures on the state and federal levels in maximizing the impact of the federal Every Student Succeeds Act (ESSA) so that music and the arts may be a ready part of any student’s schooling.

In addition, as Archuleta and Cisneros sit on their respective Veterans’ Affairs Committees in Sacramento and Washington, they took particular interest in the company’s philanthropic work for veterans. They paid special attention to the long-standing relationship between YCA and the nonprofit veteran-rehabilitation organization Guitars for Vets, which with the company’s assistance provides new guitars and a forum to play for veterans who suffer from post-traumatic stress disorder as a way for them to heal and cope.

“The Yamaha team is grateful that both Senator Archuleta and Representative Cisneros took the time to visit us here in Orange County,” said Sumner after the meetings. “When Yamaha has the opportunity to work with our state and federal representatives to further our common goals for the betterment of our community and nation, we don’t hesitate to step up. We look forward to working closely with them both in the future.”