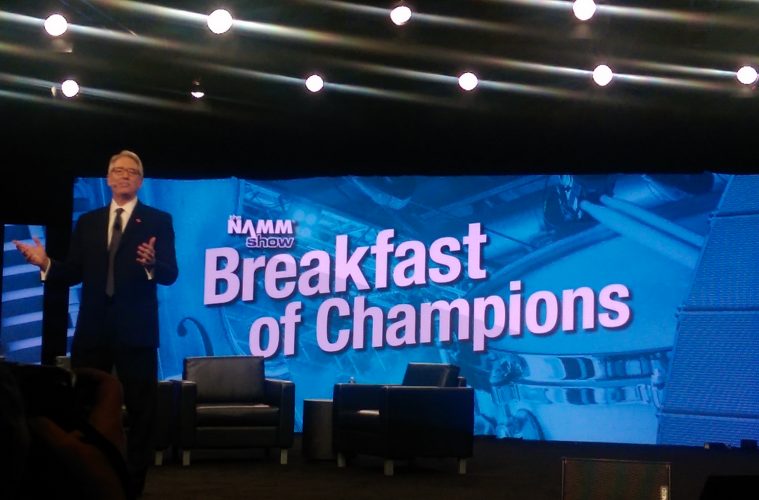 NAMM Takes on Risk in Breakfast of Champions

In order to succeed in today’s MI, taking risks is of utmost importance, noted NAMM President and CEO Joe Lamond Thursday during The NAMM Show’s Breakfast of Champions. However, he cautioned that people can’t take risks just for the sake of doing so. So how do we approach risk? Lamond pointed to the example of Chuck Surack, who went from trying to build a business in a Volkswagen van to what he is now.

“These are people just like you and me,” said Lamond. “Now, we know them as icons.”
Lamond even pointed to NAMM taking risks of its own. “We needed to change. ACC North and a new education [session] area in the Hilton are examples of changes this year. 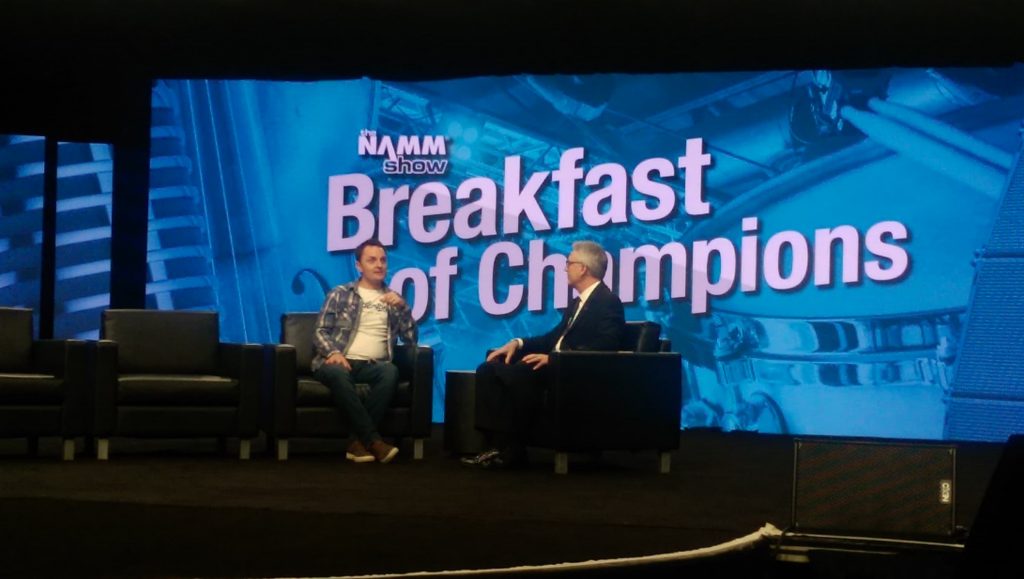 “Most successful companies made tough bets,” said Lamond. “My hope is, when you leave here, you will be inspired to take that gamble. Bringing music to the world is more important than ever.”

British-based Andertons Music was founded in 1964, and was a respected mid-size single store. But things really changed for the better in 2010, when Lee Anderton first became the star of entertaining YouTube videos.

We originally had QVC-style videos,” he said. “The video channel evolved. I made sure it was entertaining, honest and fun.”

“YouTube had an astronomical effect on business, he added. “It’s better to have people love me and hate me then never have heard of me,” said Lee Anderton. “I’m not a fan of a vanilla approach to marketing.”

“To be successful in videos, it helps to have an ego,” he acknowledged. The toughest part are the critics. “Anonymity of internet the worst part,” he said.

To prevent an outpouring of negative online commentary, Andertons Music told people who went over the line they would be banned and then banned again if they returned.
The results of viral videos have been outstanding. Andertons went from $5 million in sales 10 years ago to $40 million in online sales and $8M in in-store sales today. 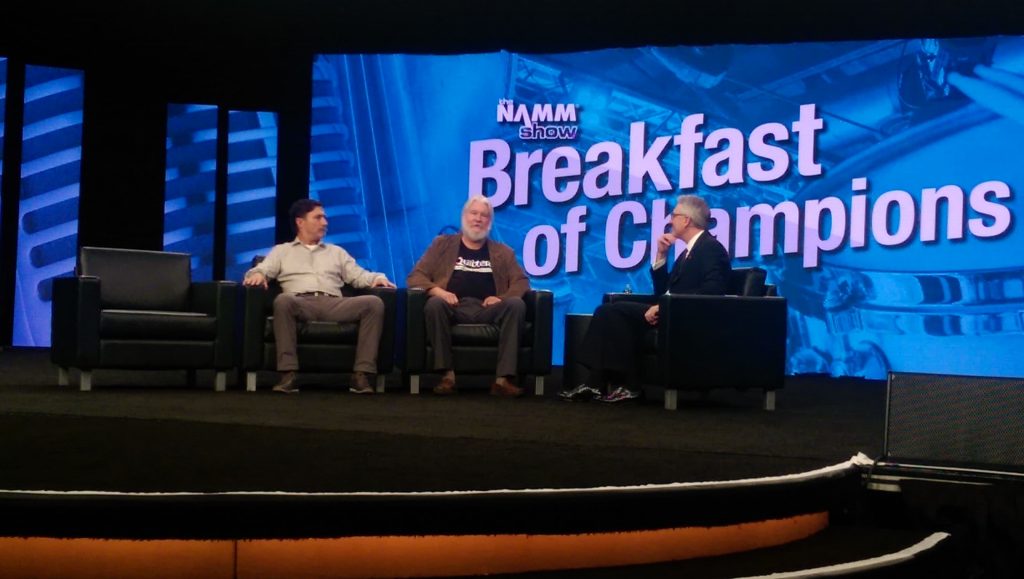 In honor of its 50th anniversary, QSC [Quilter Sound Co.] co-founder Pat Quilter talked about building his first amp at age 22 in the 1960s. The company had to take a lot of risks over the years, which Quilter undertook with partners John and Barry Andrews.

Times were tough for a time at the beginning, and QSC needed to take several risks.

“We went from boom to bust for a couple of years,” Quilter said. “We owed money and had to discount products to pay [our creditor] and get some money even though the products didn’t make a profit. That was our last major crisis.

Building its first speaker was definitely a risk for QSC. Speakers are now a great source of company growth, noted John Andrews.

Quilter concluded his comments with some advice for new manufacturer builders. “We are each on the planet for a limited amount of time. Follow that passion and make it rewarding enough. Build the best product you can at a reasonable price,” he said. 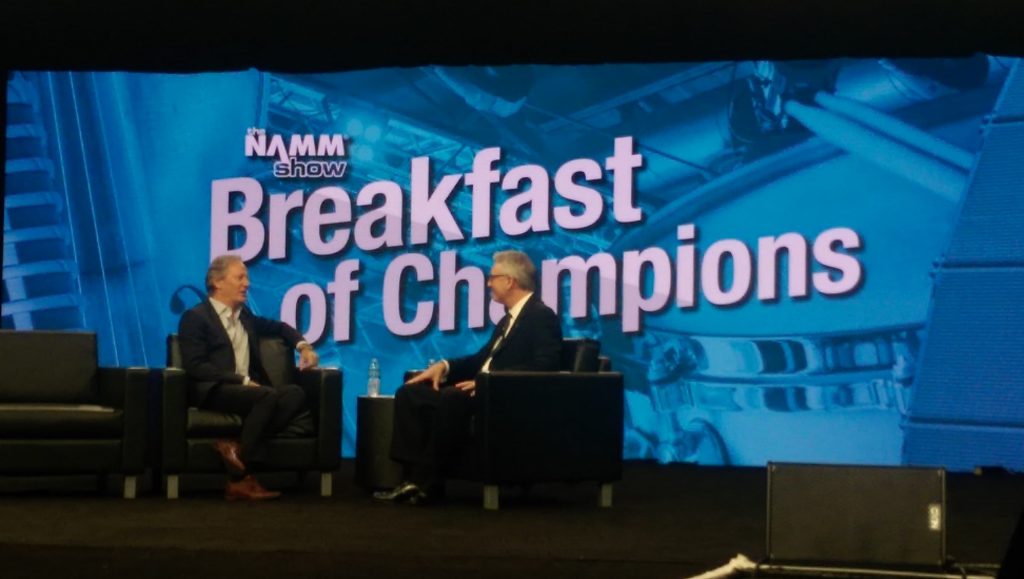 When JAM Industries Marty Szpiro joined the company 25 years ago, it had $25 million in sales with 50 employees. Today, it’s a $500 million company with 700 employees. Its brands today include Allen & Heath, U.S. Music, Davitt & Hanser and KMC.

“We learned a lot of lessons over the years,” he said. “Many doors opened we didn’t go through. And for the ones we did, not all worked. Some took years to straighten out.”

Regarding the future, There is still lots to do in North America,” he said. “A lot online regarding drop shipping. The ability to operate efficiently in different marketplaces crucial. 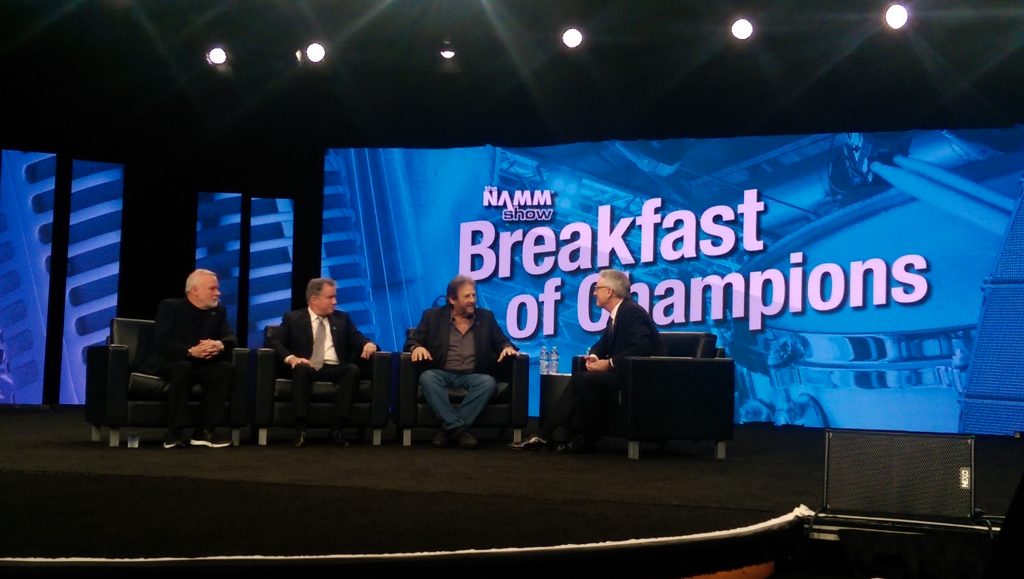 AIMM founders and retailers Skip Maggiora, George Hines and Bob Bankston all started their businesses in the 1970s. By the mid 1990s, they saw big changes in MI, including the expansion of chain stores and The mail order business. Internet developed changes happened very fast.
All three felt getting together as a group to get in front of the change was of utmost importance. “We often felt alone as an entrepreneurs,” said Bankston.

All three noticed one huge change since AIMM was founded. “The power shifted to the consumer,” said Hines. “The industry used to be controlled by manufacturers and suppliers. We saw with the internet, the consumer will be the ultimate power. It isn’t going back now. We knew a hurricane was coming.

In the future, Hines added retailers must expect the unexpected. “But adversity creates opportunity. Embrace the opp as quickly as possible. 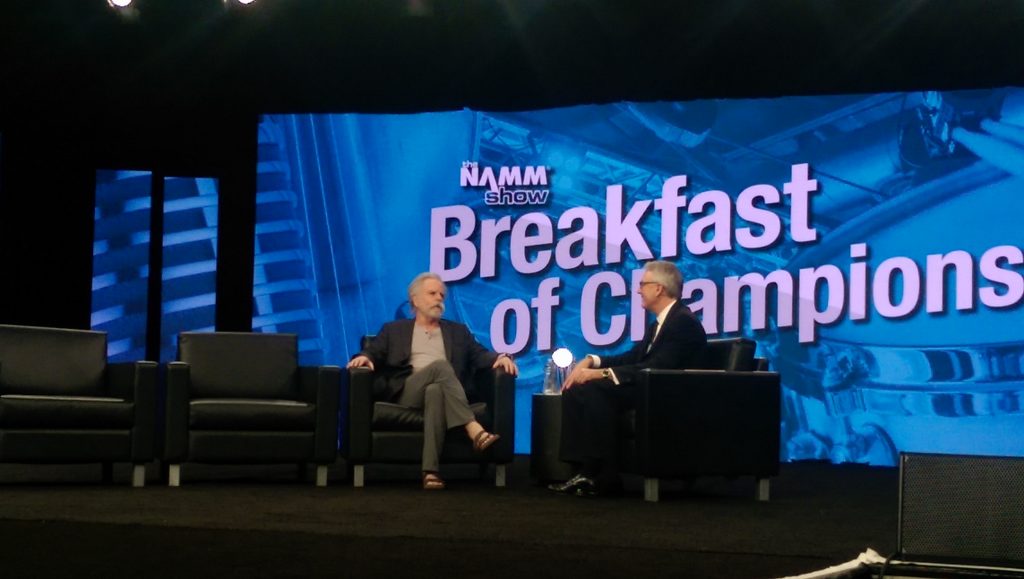 The Breakfast of Champions ended on a high note with Lamond presenting the Music For Life Award to Grateful Dead co-founder Bob Weir.

Regarding taking chances, Weir noted it was a combination of figuring things out and going with your gut. “It’s all an exercise of faith. We assumed nothing would come easily to us. Especially the meaningful stuff.”