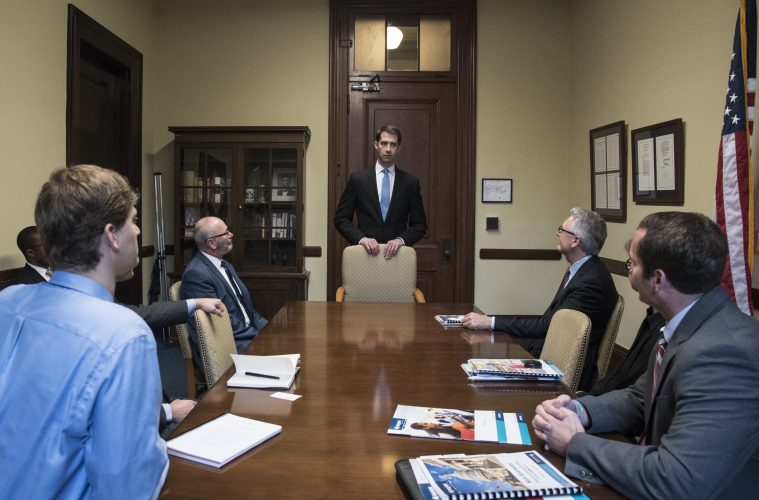 When NAMM and its music products industry delegates arrive on Capitol Hill each year to advocate directly to our congressional representatives, we boil down our efforts to a very simple goal—this year’s was “pressure.” With President Obama’s signing of the Every Student Succeeds Act (ESSA) in December 2015, many might have had the mistaken impression that the music community’s advocacy work was complete, given that we’d succeeded in getting language into the bill to enable students to receive a well-rounded education, with arts and music having been named alongside subjects like science and mathematics. As is nearly always the case in Washington, D.C., though, the devil is in the funding details. So, a group of nearly 100 members of the music products community—dealers, vendors, NAMM staff, media and artists—descended on our nation’s capital the week of May 22 for NAMM’s annual Music Education Advocacy D.C. Fly-In.

Of course, the Retailer has no partisan affiliation, and love for music and a commitment to children’s access to it is robustly present on both sides of the aisle. However, given the hyper-politicized nature of our government these days, discussion of the raw politics of the matter is inescapable. That is particularly true when a new administration comes into office and seeks to emphasize its policy priorities through its budget proposal. The Trump administration released its proposed budget for fiscal year 2018 just one day before the delegation’s Capitol Hill meetings, and suffice it to say the budget request went over with the music and arts community like a lead balloon. To explain why, though, a bit of wonky legislative talk will be necessary.

When the ESSA was signed into law, one particular title of the bill—think of titles as chapter divisions—was immediately apparent as being critical to supporting and expanding a well-rounded education: Title IV, Part A, Student Support and Academic Enrichment (SSAE) Grants. This block grant provision provides federal money that states can allocate flexibly to assure access to well-rounded programs. In the ESSA’s text, Title IV, Part A, is authorized for funding at roughly $1.65 billion per year. For the 2017 fiscal year, Congress approved only $400 million. And President Trump’s budget, released the week of the Fly-In, proposed $0 for the grant program. Although it is Congress—not the president—that allocates federal dollars, NAMM members are very concerned about whether well-rounded programs will get the money that, by the ESSA’s very text, was intended for them.

That’s why NAMM’s Government Relations and Public Affairs Director, Mary Luehrsen, and Leo Coco, Senior Policy Advisor for the law firm Nelson Mullins Riley & Scarborough, urged the delegates to pressure congressional representatives and senators to fund SSAE Grants at the full $1.65 billion level annually, as stipulated by the ESSA. Although other priorities, such as professional development for music and arts teachers, sufficient allocations for the National Endowment for the Arts and National Endowment for the Humanities, and Title I funding for underrepresented, disadvantaged and minority students, were part of our scope, Luehrsen and Coco both urged “surgical precision” in our advocacy. And, in nearly 200 individual meetings, the largest-ever contingent of NAMM members, representing 35 states, put that strategy to work.

Since most of us spend our days selling music products, administering music lessons, manufacturing instruments or playing them, we required a bit of coaching on how to be effective advocates for our deeply felt cause. Fortunately, we received first-class training and an up-to-the-minute issues briefing on May 23 at the Newseum. Presentations and roundtable discussions featured experts from The U.S. Department of Education, The National Governors Association, The National School Boards Association and The National Association of State Boards of Education. We also heard from likeminded organizations like The National Association for Music Education and Americans for the Arts, with both of which NAMM regularly partners and strategizes. In addition, New York Times opinion writer and cultural commentator David Brooks delivered a talk about our divided and rancorous society that, if I may editorialize, few of the delegates will soon forget.

During our training, we learned that the ESSA was designed to delegate substantial authority and control to the individual states, the federal government’s role mainly being to allocate funds that states can use for their own well-rounded programs. Each state must submit a separate plan, and the deadline for doing so is mere months away. At the time of the Fly-In, 16 states and the District of Columbia had already submitted their plans; of those submitted, about a half-dozen have strong music- and arts-related language, whereas about a dozen…