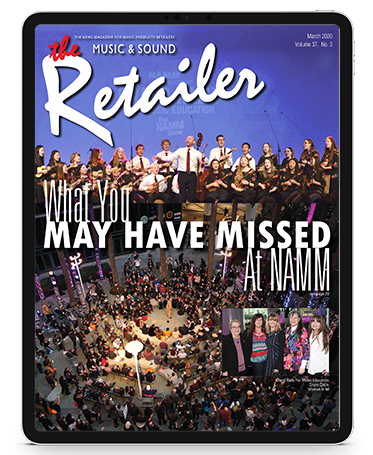 In the midst of economic and political tumult, members of the music products industry found their safe haven at the NAMM Show, held January 21 to 24 in Anaheim CA. Drawing record-breaking attendance and attracting more exhibiting companies than ever before, the show was a welcome oasis for the music-making masses.

The NAMM Show in Photos

An update on your fellow brick-and-mortar independent retailers.

Hawaiian Ukulele & Guitar took a huge step from being an MI retailer to also being a nationwide ukulele manufacturer. The company exhibited for the first time at The NAMM Show. We get the lowdown on the company from “Uncle Uke,” aka Robert Yates.

D’Addario & Co. Inc. announced that effective Jan. 1, John D’Addario III, son of John D’Addario, Jr. and nephew of the current CEO Jim D’Addario, would take on the title of CEO in addition to his current role as president. Jim D’Addario, one of the company’s founders and leaders since its inception in 1973, stepped down as CEO and assumed a new dual role as chairman of the board and chief innovation officer. We visited the D’Addario offices and asked about their new roles and much more.

You may know that Jeremy Payne, national account manager for The Music People, On-Stage and TMP-Pro, won the Music & Sound Award for Rep of the Year the past two years. But you probably do not know that he is also a Brazilian jiu jitsu practitioner.

Part 2 of MI Spy’s journey to Chicago, including visits to two more stores. This month, Spy picks a winner.

When customers walk in the door, MI retailers need to counsel them, educate them or just help them out. It’s up to dealers to ask questions, figure out what they really need and then explain to them the best path to take.

Months ago, The Music Zoo moved its retail location from Roslyn N.Y., to Farmingdale, N.Y. We get the reasoning behind this move and learn how business is going from The Music Zoo president Tommy Colletti.

We have seen so much disruption in the economy, in retail and in the music products industry itself. Ignoring the changes and the opportunities these “new normals” present can confine us, states Dan Vedda.