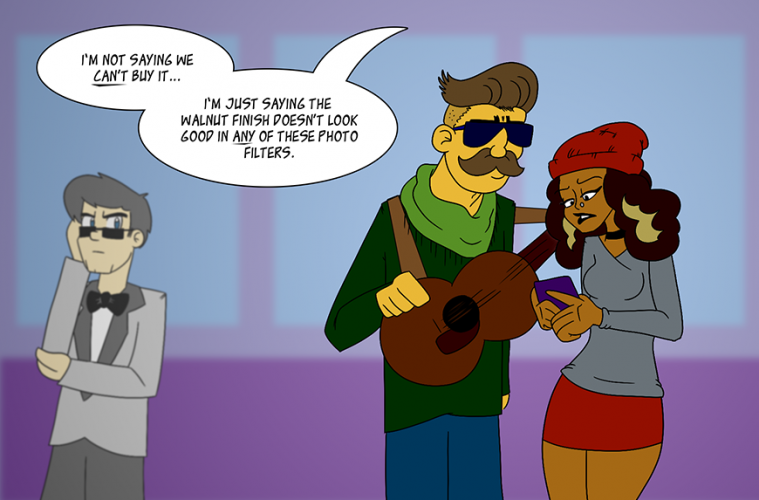 Ah, the NAMM issue of the Music & Sound Retailer. Is there anything better? Attending the event gets me as giddy as entering my favorite candy store, and reading a trade magazine about the show finishes a close second. Being a master of tricks, disguises and flirting with the opposite sex, I decided to play a trick by visiting Nashville, home of Summer NAMM for this issue. Why? I have no idea. I didn’t feel like visiting Anaheim before the show and my boss, M, told me it was OK to select somewhere else. I selected Nashville.

More than at any time in its past, Nashville today truly is Music City, with a constant influx of pickers, singers and songwriters moving into “Gittar Town” for two reasons: one, to play and write music, and two, to get money for doing it. The second thing seldom happens. Regardless, the acoustic guitar has become as ubiquitous in middle Tennessee as grits, and it’s hard to walk down the street in Nashville without bumping into somebody with a gig bag on his or her back. So, it’s no surprise to see new music stores opening, while the established ones seem to be thriving.

Today’s Nashville has a mix of neighborhood stores, boutique shops, appointment-only guitar builders and vintage dealers. And don’t forget the inevitable big-boxes, like Sam Ash in suburban Madison, and Guitar Center, which opened a second Nashville location last year. I decided to see what kinds of deals I could find in the acoustic-with-a-cutaway market. In undertaking my MI Spy assignment, I grabbed a couple picks, put on my Oakleys and proceeded to go shopping. But instead of driving my Aston Martin, I hopped in my old Chevy pickup to look the part of yet another picker who’s broke because he spends all his money on gear that he makes no money performing with.

Located in a house that doubles as a music store and a vintage clothing and memorabilia shop, Fanny’s was named the “Best Place to Buy a Used Guitar” by the readers of Nashville’s weekly alternative magazine. Three small rooms were pretty well stocked with guitars and other stringed instruments and amps. It’s mostly used gear, but the store does carry some new stuff, such as Recording King guitars, a nice line that’s reasonably priced.

The 20-something guy at the small desk just inside the foyer told me to play whatever I wanted, so I did. I checked out a Taylor 314 EC L4 acoustic-electric cutaway priced at $900, which had great sound but was a little larger than what I wanted. I then tried out a very unique and rare Fred Welker acoustic cutaway, made with unusual and resonant black maple and priced at $2,800.

My tryout was interrupted for a few seconds by a group of six attractive and talky millennial ladies who came in to check out vintage clothes in the adjoining room. I asked the desk dude about dickering over the price, and he came back a couple minutes later with a female (who’s name wasn’t Fanny). She knew her stuff, talking to me about the history of the Taylor and the Welker, and the woods they were made of, before we even got around to talking money. She said that she could go as low as $850 on the Taylor — no case though — and $2,400 for the Welker, with a case, if I was paying cash. Not bad deals, especially for the Welker, which was one-of-a-kind. I told her I’d give it some thought.

Eastside Music Supply opened a year or so ago in the northeast Nashville suburb of Inglewood to little fanfare, but word is getting around. When I stopped in it was pretty busy, with a couple of rockers trying out electric guitars, and others looking at the store’s impressive pedal selection. I already knew that the small shop stocked a lot of new and used electric gear, and I wasn’t expecting to see much in the way of acoustics, which was indeed the case. But what they did have was a sweet selection for such a small store. A 1952 Gibson SJ (Super Jumbo), a pre-war Gibson L-30 archtop with twin f-holes, a cool 1970s Guild. I was impressed.

When I asked the 30-ish guy at the counter if I could check out the SJ, he happily told me to grab it and helped me pull up a stool. The guitar had a great sound and was impeccably set up. Though it was listed for $7,500 on the store’s website, he told me he could go down to $6,000. I thought this had to be a mistake, so I actually started to consider it, until I remembered my limited MI Spy expense account.

I really was looking for a cutaway though, and the Gibson didn’t have one, so I checked out a cream-colored, like-new Breedlove Concert Pursuit acoustic-electric. The counter guy first told me it retailed for $600, then said he’d go to $585 since this was one of the few guitars in the shop without a case, and could maybe go even lower if I was really interested. Not a bad deal, but I demurred for the moment. Overall, with local music venue posters plastered everywhere and the three small display rooms buzzing with enthusiastic shoppers, the vibe was that it’s a musician’s store, seemingly focused on making music first and making money second.

Located in the lakeside Nashville suburb of Old Hickory, Superior Music/Amp Doctor is a mom-and-pop-type store in an underserved area. Though in Nashville, “mom-and-pop” can mean that your parents made major-label records and played the Grand Ole Opry. The store relocated to this area a couple years ago from a neighboring county, presumably to get a bigger piece of Nashville’s growing pie. I went in and was greeted by a friendly salesman, the only person in the store during the slow mid-afternoon. He told me to take a look around the store’s four small rooms, which were fairly jammed with guitars, amps and drums. I saw a couple nice vintage Gibsons and a used Martin, in addition to new, wallet-friendly models by companies like Rainsong and Sunlite. When I had settled on a couple acoustics I wanted to check out, the sales guy told me to play away.

First, I tried an immaculate used acoustic-electric Ibanez Exotic Wood AEW402W six-string for $279.99, gig bag extra. It looked better than it sounded with zebrawood top, back and sides, but it did sound pretty good for the price. The action wasn’t great, but no complaints at $279.99. Then I checked out a new acoustic-electric Alvarez AD60CE5HB, case extra, at $449.99. This dreadnought was top-shelf for the price point. It absolutely killed. The guy said he could knock $50 off the Alvarez, and he could go to $250 for the Ibanez, tax included. Both were decent deals, which I told him I’d think about.

For more than half a century, Cotten Music Center occupied a store that was walking distance from the music industry offices on Music Row, until progress, i.e., developers with lots of money, forced the store to move a few miles away into what turned out to be a much cooler and larger space in a hip, repurposed industrial building. Cotten has handled all kinds of instruments over the years, but its business today is largely sweet high-dollar acoustic guitars, generally used and often on consignment. I went in to see what it had for cutaways and definitely wasn’t disappointed.

I was greeted by an older gentleman, and after we discussed the woes of urban development and eminent domain, he graciously told me to go ahead and try whatever I wanted in the spacious display rooms. First, I checked out a gorgeous Guild Doyle Dykes Signature Model acoustic-electric with a Florentine cutaway. It had an excellent neck that reminded me of an electric hollowbody Gibson Byrdland for a reasonable $2,595. Then I tried out a 2001 Collings C-10 Deluxe Custom with a firestripe pickguard that played and sounded great at $5,000. I asked the salesman what the best cash price would be, and he told me they were both on consignment, but he would make a couple calls to find out the rock-bottom prices. He took my name and number. This was on Friday afternoon.

P.S.: A little after 10 a.m. on Monday the phone rang. Cotten told me it could go down to $2,000 on the Guild, as the guitar’s owner really wanted to sell it, but she could only go down $100 on the Collings. Not bad deals, and I thanked her for prompt response that was professional and much appreciated.

The lady at Fanny’s knew her stuff, was nice enough and her prices probably weren’t unbeatable, but they were fair. For me, though, the place was almost more of a neighborhood hang or even a tourist shop than a place to seriously buy a guitar, though that’s not to say it’s a bad place. A lot of the gear was cool and unique, and I almost bought a retro shirt while I was there.

Superior Music/Amp Doctor was a good little community store in an area that’s only a few minutes from the big box stores in the city, but had prices as reasonable as anyone’s and a salesman who was willing to do what he could to make the sale. And it had some brands, especially in the cheaper beginner guitar arena, that I haven’t seen anywhere else.

Cotten Music Center was very professional and businesslike in the way it got back to me quickly with my info. It had a great selection of primo guitars, some out of the reach of the common picker and some not. But it had more room to try out the guitars, and a bigger selection, than it did in the old days, and it hasn’t been around for more than five decades for no reason. A good store.

And the winner, but only by an .008 E string, is …
Eastside Music Supply. The place is a little light on selection, but it had some awesome axes with a staff that was gracious and willing to deal. The coolest thing of all, though, was the overall vibe of the store as a place for people who really love music. It was almost palpable, as if the staff might grab their guitars first and the cash register second if the place caught on fire. A fun and welcoming place to shop. I wouldn’t be surprised to see these guys come up with some expansion plans, if they already haven’t, because they could really use them.