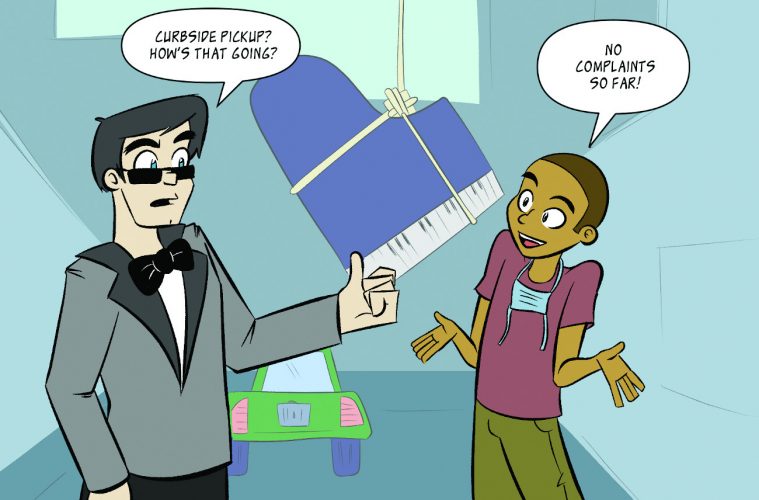 MI Spy concludes his/her trip to the Windy City and declares a winner.

Welcome back, MI Spy fans! Your favorite retail sleuth is back in the field, and my first journey outside the confines of the MI Spy Cave in months has taken me back to one of my favorite cities: Chicago.

For this mission, the Chief tasked me with gathering intel on entryand intermediate-level keyboards for serious students being sold by the MI retail stores serving Chicagoland’s western corridor. So I hit the stores looking for keyboards with 88 weighted keys and pedal options.

PM Music Center is located on the drive ringing the Fox Valley Mall in the city of Aurora in Chicagoland’s west suburban region. The Fox Valley Mall is the heartbeat of a (usually) vibrant commercial area and attracts a healthy level of retail traffic. PM Music Center has been in business since 1982 and offers a full range of instrument sales, repair, instruction and accessories, especially focused on school band-andorchestra programs. Past industry press about this retailer talks about how it prizes customer service over store size and business volume. Situated in a market area thick with both national and local dealers located nearby, it appears to have held its own so far through the most recent challenges.

The store entrance had a prominent sign requiring masks as mandated by the state governor’s office, and immediately inside were several hand-sanitizer pumps readily visible and available. The checkout register station featured a Plexiglas barrier. The store had just opened for the day, and there were a couple of other customers already being taken care of.

I was warmly greeted moments after entering by a smartly dressed and masked staffer offering his help. When I explained what brought me in, he remarked that the store did have “a limited selection” of keyboards on hand and could get anything else I may be interested in. He then led me from the main floor to an airy side room filled with nearly a dozen full keyboards, all of which met the criteria for my search.

The selection featured both Yamaha and Casio brands. Display signage promoted a current “Sale-A-Bration” offering an additional 10-percent off the store’s already-discounted pricing, and opportunities for financing options. Its entry-level-price-point offering was a Yamaha P45B for $489.99, not including stand, bench or pedal — a sturdy starter keyboard, but no bells or whistles. The next step up was a Casio Privia PX-160 for $529.99 featuring 18 tones and including a sustain pedal. This is another sturdy starter and discounted from a suggested list price close to $850, which struck me as quite a value.

For $100 more at $629.99, PM Music offered the Yamaha P125B. This weighted keyboard has a great feel, and excellent dynamic touch sensitivity. With 24 voices from grand piano to rock organ, it’s a versatile instrument and an exciting playground, especially for new young students. Though pedal, stand and bench are add-ons, the asking price was deeply discounted from a suggested retail price around $1,000, which leaves room in the serious student budget for a solid-value investment in an instrument that will serve well for years to come.

Additional offerings worth mentioning included Yamaha’s DGX660B for $789.99, a tech-packed “arranger” workstation with expanded polyphony, selection of preset songs, track-recording capabilities and rocket ship display features; the Arius YDP-144R console model at $1,049.99, with even more finely engineered hammer action that best emulated a real piano feel; and the top-of-the-line Arius YDP-164R rosewood console for $1,449.99, a beautiful piece of furniture as well as a fine instrument.

The staffer was most attentive and helpful to me. He made sure that I had literature on the store’s expansive Private Music Teacher Perks program, including information about additional discounts, exclusive access to special events and workshops, and even a referral service for teachers looking to take on new students. This store is totally tuned into partnering with teachers to best serve students area-wide. I went on my way quite impressed with its “limited” product offering, pricing, attitude and customer-service experience.

My next stop was literally moments away, also among the retailers ringing the Fox Valley Mall. The parking lot was empty when I pulled in, as was the store, except for the sole staffer on duty. Not only was it still early in the music retailer’s day, just after midday opening, but non-essential stores had only been re-opened for a few days, and traffic was still light.

Hix Brothers Music is a local retail music establishment originally founded in 1946 by John Hix. He retired in 1996 and passed the business on to his three sons, who gave the store its current name. They opened a second store in 2003 about 15 miles northwest in the Fox River town of Batavia. Hix Brothers Music offers a full range of band and orchestra instrument and accessory sales, rental, and service, along with a variety of individual and group lessons. The main store, which I was visiting today, features nearly a dozen teaching studios, a guitar and amp repair shop, and rooms for rehearsal, recording, and its signature ukulele clubs.

The only stand-out sign on the entry door celebrated the store’s new Ukulele room; there was no indication that a mask was required (though this is clearly stated on the store’s website). The cheerful staffer seated at the counter did mask up as soon as I stepped in, then greeted me and offered his help. There was also hand sanitizer at his checkout station, but no Plexiglas shield. I slathered up with the sanitizer, preparing to play some keys while I explained what brought me to the store. He promptly pointed out the keyboard display and walked with me to the area.

The store had about a half dozen keyboards on display, four of which were the full 88 weighted-key models that I was pricing. Since Hix Brothers Music is just around the corner from PM Music Center, it was not surprising that these keyboards were the same Yamahabrand models on display at the other store, priced slightly higher yet comparably to its colleague. This store’s Yamaha P45B was priced at $499.99 for the board alone. Proper pedal and stand options would add another $75-$130, depending on your selection. This applied also to the P125B model priced at $649.99. Hix Brothers was asking $799.99 for the Yamaha DGX-660B, and another $74.99 for Yamaha’s LP7A three-pedal assembly. There was also an Arius YDP162R complete console on special sale for $1,299.99, a good price and value that day at this store, if this was the level of instrument you were in the market for.

The staffer was quite friendly and helpful in answering my questions. We chatted briefly about the shutdown and its effect on his business. He shared that it had been a sad and difficult period, that the store had only just reopened, and though it felt slow coming back, he was optimistic about business eventually returning to normal. He also mentioned that fresh inventory was still a little slow to come by with the pandemic’s impact on manufacturers and their delivery channels. I bid him the best and went on my way.

All the stores I visited on this mission were strong contenders. The on-hand selection offered by all, across entry- and intermediate-level choices, was good, despite a few pandemic-related supply gaps. Pricing across brands and models was relatively competitive. Modified store environments and practices for customer and staff safety were also consistently good, with the larger national chain stores, who are used to dealing with higher traffic, going the extra mile.

Hix Brothers’ more modest selection offered its own shine in competitive pricing, packaging and customer attentiveness. Guitar Center wins in quantity of selection, continues to be very cost competitive and is consistent in its positive service attitude. Sam Ash remains a strong retail player in both selection and service, and despite current temporary stocking challenges, still has attractive options at hand for the serious beginner and intermediate keyboard student.

It’s important to note here that both of the national chain stores visited for this mission, GC and Sam Ash, are also merchandising keyboards in their stores beyond entry- and mid-level price points. They have some impressive offerings and are successfully serving a broader customer swath, including more ambitious and accomplished musicians.

The winner for this particular mission, though, is local independent retailer PM Music Center. It’s not just that it offered a solid selection in our target product category on par with the national chains, or that it offered consistently lower pricing than all the other stores we visited, or even its exceptionally polite and attentive customer service on the salesroom floor. The big tip-in here is how much PM Music values partnership with the teachers in its community, so much so that it formalized a “Private Music Teacher Perks” program. This program includes graduated discounts on printed music, recital room preferential rates, exclusive invites to events and workshops, new student referral services, and the list goes on. A program like this engages teachers in dialogue around their preferences, practices and professional affiliations. It enhances both the store’s ability to best shape their offering, and teacher and student ease of access to preferred instrument brands, accessories, printed music and study materials.

PM Music provides an exceptional example of a retailer proactively promoting and supporting the love and pursuit of performance of music in its community. Bravo!