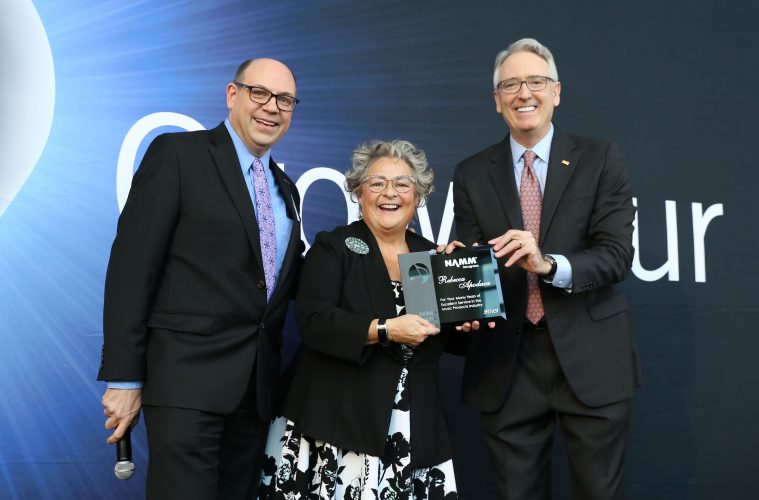 It is with a heavy heart that the MI industry mourns Rebecca Apodaca, who passed away on Friday. Her daughter, Micaela Johnson, sent a message announcing the news.

Throughout the music industry, Apodaca was known for her knowledge as an appraiser of musical instruments, as well as a pioneering female band instrument repair technician. Around the NAMM building, she was known for her role at the organization’s trade shows, providing educational sessions beginning in the 1980s. Apodaca took part in the annual DC Fly-In, and she loaned and gifted instruments to the NAMM Foundation’s Museum of Making Music. Apodaca’s dedication to the industry also led to her role supporting the NAMM Oral History program.

Apodaca was president of A & D Music Incorporated in Southern California. She played music as a child and gravitated to the electric bass. Her father and others such as Doc Kauffman (Leo Fender’s partner) and Bernardo Rico (BC Rich founder) taught her guitar repair. She grew up replacing strings and adjusting necks on guitars. Over the years, she received certifications and degrees in music, musical instrument repair and expanded the services of her business to include appraising musical instruments. She was the first person certified as an “Accredited Senior Appraiser – Musical Instruments” by the American Society of Appraisers in 2011.

Additionally, Apodaca wrote several columns for the Music & Sound Retailer over the years, discussing repairing and appraising instruments. She appraised guitars played by members of Black Sabbath and Rage Against the Machine, as well as a piano owned by composer Irving Berlin. She later worked as an Expert Witness and IRS Qualified Appraiser for tax donations of musical instruments.

Throughout her career, Apodaca was dedicated to infusing everything she did with integrity and professionalism. Her accomplishments will no doubt benefit our industry for decades to come.