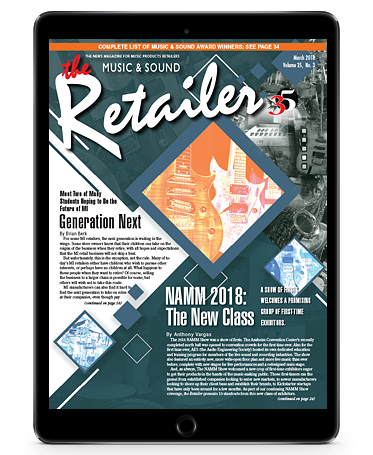 Plenty of companies exhibited their wares at NAMM for the first time in January. We take a look at 10 of these companies, and some cool things they have to offer for MI retailers.

For some MI retailers, a succession plan is simple. For others, not so much. We interview two students who hope to soon take the industry by storm.

This month, we speak with Rob Troke, president of Veritas Instrument Rental (VIR) in his first magazine interview, so expect a fresh perspective.

MI Spy shows off his/her patriotism by visiting our nation’s capital, Washington, D.C. Who took the victory? Music on the Hill, Middle C Music, The Violin House of Weaver or Guitar Center Rockville?

According to Allen McBroom, 80 percent of the MI stores in America are faced with often unrealistic re-up demands in the first quarter. Here’s his suggestions to help alleviate this problem.

Armando Zuppa, owner of Music Lane Emporium, has always wanted to bring the music that he loves so dearly to the South Florida music scene and help the South Florida acoustic musician with the right tools and knowledge of acoustic instruments.

It’s easy to feel like we’re looking at the end of traditional musicianship. But there is hope, because music in all its forms has survived the test of time, notes Gabriel O’Brien.

We need to recognize opportunity when it presents itself, says Robert Christie.

Customer loyalty is the key to getting ahead in the current retail environment. Tim Spicer explains what he does to make sure his customers feel like VIPs.

Music instruments are not just for kids anymore. Dan Vedda reveals plenty of adults walk through his doors — perhaps learning an instrument for the first time — and it’s a demographic MI retailers can capitalize on.

D’Angelico’s Bedford, Ludlow and Atlantic solid-body guitars were well received when launched at The NAMM Show. Here’s a look at what makes the company’s newest models unique.

Meet the man behind Fender, Andy Mooney, who tells us the best advice he ever received, the concert he enjoyed the most and much more.