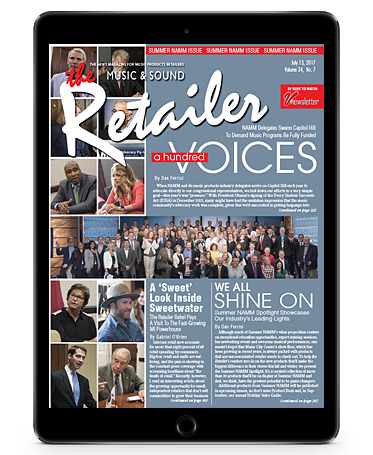 A group of nearly 100 members of the music products community — dealers, vendors, NAMM staff, media and artists — descended on our nation’s capital the week of May 22 for NAMM’s annual Music Education Advocacy D.C. Fly-In. When NAMM and its music products industry delegates arrive on Capitol Hill each year to advocate directly to our congressional representatives, we boil down our efforts to a very simple goal — this year’s was “pressure.”

A ‘Sweet’ Look Inside Sweetwater

Sweetwater is a company that, in Founder and President Chuck Surack’s words, decided it “would not participate in the recession.” And, spoiler alert: It didn’t. Sweetwater’s sales grew from $136 million in 2009 to more than $500 million in 2016. Gabriel O’Brien had to take a closer look at the MI powerhouse by visiting its Indiana headquarters.

We All Shine On

Want to know many of the coolest products being introduced at Summer NAMM? You’ve come to the right place by reading this cover story.

A one-stop source for all of the educational happenings at Summer NAMM in Nashville this month.

A comprehensive guide of all the companies exhibiting their products at Summer NAMM.

Although some successful executives in the music products industry arrived in the MI world by happenstance, our market’s true leaders tend to be the ones who’ve lived and breathed music seemingly from the cradle. That certainly describes Crystal Morris, Founder and CEO of Gator Cases, whose father was involved in the MI industry and who attended her first NAMM Show as a young girl. The enthusiasm, passion and creativity she discovered in girlhood suffuses Gator, a family business in the best and truest sense of the term.

Musical life in Albuquerque is rich. Many musicians have called the New Mexico city home, including Kurt Frederick and John Lewis. So, what better place for your humble correspondent to investigate? This month, MI Spy checks out Baum’s Music, Grandma’s Music & Sound, Guitar Center and Music Go Round.

Special To The Retailer

The Music & Sound Retailer expands its New Mexico theme with Cindy Cook, Co-Owner, as well as director of education and marketing, for Santa Fe-based The Candyman Strings & Things. She provides exclusive thoughts from her visit to Washington, D.C. for the NAMM Fly-In.

Allen McBroom offers ideas for something every MI retailer needs: padding the bottom line. One way is to drive more traffic to your store, and blogging can never hurt.

McKinney, Texas-based Guitar Sanctuary saw opportunity during the depths of the financial crisis in April, 2010, when it opened its store. The risk has paid off in spades.

We’ve seen plenty of headlines about retailers closing stores recently. And it is unknown what affect Amazon’s announced acquisition of Whole Foods Market will have on the retail industry. But despite the news stories, Gabriel O’Brien opines that MI retailers can still thrive.

A new Starbucks location opened near Dan Vedda’s MI store, with very little fanfare. Despite little to no publicity, cars were queued up 15 lanes deep following the opening. Vedda looks at what retailers like Starbucks are doing right.

Anthony Vargas takes a look at Celestion’s FTX1025 and FTX1530. Among its benefits are FTX Series’ Common Magnet Motor Assembly, which uses the same magnet for both low-frequency and high-frequency elements to enhance the inherent benefits of coaxial speaker technology.