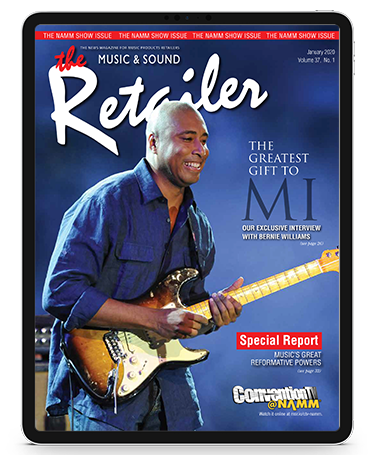 The Greatest Gift to MI

The Music & Sound Retailer sits down for an interview with Bernie Williams, whose advocacy for music and MI is unrivaled.

In this special report, we explore how music is transforming the lives of those in prison.

We highlight 30 products being featured at The NAMM Show this month.

A recap of AKG’s 70th anniversary celebration in Los Angeles, during which the company presented a lifetime achievement award to legendary producer Quincy Jones.

Under the Hood: Fender

Fender unveiled its American Ultra Series, which the company says is its most advanced modern guitar.

Under the Hood: KRK

KRK ROKIT G4 Studio Monitors feature a systematically designed low-resonance enclosure for minimal distortion and colorization, and a high-density ISO that decouples the speaker from the surface. The company also introduced an accompanying app.

For our NAMM issue, we go big by interviewing all three partners at Taylor Guitars: Bob Taylor, Kust Listug and Andy Powers.

For Yoshi Ikegami, president of BOSS, nothing is more valuable than his family, but otherwise, his most prized possession is his ’59 Gibson Les Paul 60th anniversary model.

Everyone’s favorite spy returns after a month off to head to the Steel City.

Tim and Lana Spicer made a cross-country trip in an effort to learn best MI retail practices. Here’s what they found.

As an MI retailer, you may need to do some retraining of your sales staff, explains Robert Christie. Here’s why.

Ever wondered about all of the brands a company manufactures and distributes? We provide all the answers in one place, starting with Yorkville Sound this month.

There’s a simple way to keep your customers coming back to the store. Introduce them to the world of in-ear monitoring, says Mike Dias, executive director of the In-Ear Monitor International Trade Organization.

Tips From the Teacher

The “death of retail” is a concern retailers often think about it. Kimberly Deverell tells you how to avoid this fate this year.

Mike and Miriam Risko, owners of Mike Risko Music in Ossining, N.Y., join our team of columnists. They write about how to reach your local community by marketing your storefront the old-fashioned way.

Something very simple — a good attitude — can make a huge difference as an MI dealer.

Consumers are 70-percent more likely to buy something they’ve watched a video on, and videos can boost your conversions by 80 percent, making them crucial to your business, says Gabriel O’Brien.

Steve Stoltenberg has been the man behind Northwest Music Shop in Davenport, Iowa since the 1970s. He shares how he has seen both the community and MI industry grow since.