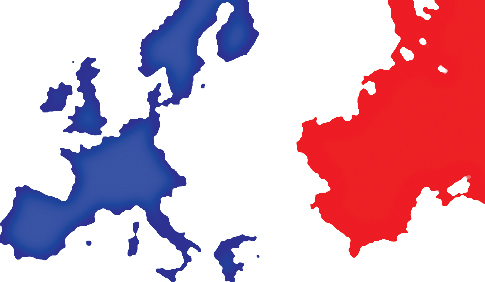 The Iron Curtain, And 43 Years Of Attending Music Fairs In Germany

I’ve been fortunate to make many trips to my family’s homeland of Germany during the past 43 years. One of my favorite cities to visit is Frankfurt, home of Musikmesse, Europe’s largest international music industry trade show. If you’re into music and musical instruments like I am, and you enjoy being around high-energy people and talented artists, then you’d love Musikmesse. It’s like a big candy store!

Today’s modern, state-of-the-art Musikmesse is a far cry from the German music fairs Gretsch representatives attended back in the 1950s. I heard stories from longtime Gretsch Company employees Duke Kramer and Phil Grant, who attended the 1955 Messe in Frankfurt. It was the Gretsch Company’s first German music fair since World War II, and Frankfurt had been heavily destroyed during the war and it was still being rebuilt. There were no suitable exhibition halls, so the fair was held in tents. Duke and Phil shared with me how cold it was setting up the Gretsch drum and guitar display and having to bundle up to stay warm in those large, unheated tents.

After the family business was sold to the D.H. Baldwin Company in 1967, I stayed on for a few years before leaving Gretsch in 1970 to start my own wholesale business. I sold musical instruments to national companies like Sears, Montgomery Ward, Spiegel and others. My business included importing guitars, harmonicas, concertinas and accordions from East Germany. This was the era when you could only import instruments from Demusa, the state-controlled distributor of all instruments made in Soviet-controlled East Germany.

I remember traveling to music fairs in East Germany when the Iron Curtain was in place and very strong. I attended trade shows in Leipzig, Germany each year, back in the day when you had to get a special visa to enter the country. When you arrived at your destination city, you had to register with the local police as to where you were staying and what you were doing in town. It was kind of scary!

It’s been cool to watch Musikmesse grow and evolve in Frankfurt over the years to become the huge event that it is today. But, it’s not surprising: Frankfurt has been hosting successful trade fairs since the Middle Ages. Frankfurt’s central location within Germany helped establish it as a major marketplace as far back as the 1200s. In 1585, a group of local merchants established the Frankfurt Fair, the model that laid the foundation for the successful combination of trade, exhibitions and finance. It’s a successful model that continues nearly 430 years later.

Centuries and world wars later, Frankfurt, with its impressive skyscrapers, museums and the third-largest airport in Europe, is still the bustling business and financial center of Germany. It also hosts some of the world’s most important trade shows, such as the Frankfurt Auto Show, Frankfurt Book Show and Musikmesse. This year’s Musikmesse drew 110,000 people from 142 countries, and there were more than 2,200 exhibitors from 57 countries. That’s impressive! I still remember years ago when we were in a single, 100,000-square-foot building. It was nothing like today’s super modern structures and 10 exhibition halls covering more than 578,000 square meters.

My schedule was very full during the four-day Musikmesse event, meeting with customers, prospects, factory people, musicians and the general public. There were also a lot of artist activities and concerts across the many stages that I wanted to attend. This year, we had Gretsch artist Adriano Batolba performing with his Trio. They’re Germany’s number-one Rockabilly band. Gretsch guitars and drums also sponsored an autograph session with The BossHoss, a groundbreaking German country and western band that also coaches on Germany’s version of “The Voice,” the popular reality singing competition.

Besides Germany playing an important part in the Gretsch Company’s international sales success, the country also has special family ties for me. My great-grandfather, Friedrich Gretsch, who started my family’s business in Brooklyn in 1883, was born in Germany in 1856. He was only 17 years old when he boarded a boat and immigrated to America to work at his older brother’s wine business. I guess music was in his veins because, soon, he left the wine business to work at Albert Houdlett and Sons, a drum and banjo company at which he apprenticed for several years. In 1883, he continued the Gretsch family entrepreneurial spirit by opening his own music shop in Brooklyn, making banjos, drums and tambourines.

Unfortunately, my great-grandfather did not get to see his modest music shop on Middleton St. grow and move to the famous 10-story Gretsch Building at 60 Broadway in Brooklyn. In 1895, while visiting family on his first return trip to Germany, he became seriously ill and died from cholera. He was only 39 years old. Upon Friedrich’s untimely death, the family business was placed in the hands of his oldest son and my grandfather, Fred Sr. (who was only 15 years old). Fortunately, the Gretsch entrepreneurial gene was passed along from father to son. For 47 years—from 1895 until his retirement in 1942—Fred Sr. successfully guided Gretsch to become one of the world’s largest and most respected manufacturers of musical instruments.

Following last year’s Musikmesse event in Frankfurt, my wife Dinah and I made personal appearances at major German music retailers in Cologne and Hamburg. It was very special to be in Hamburg, the city where my great-grandfather died, to celebrate his company’s 130th anniversary. I shared the Gretsch Company’s 130-year history in fluent German. The German audience appreciated it, and it was very satisfying to bring the family’s history back to the country where it all began.

Fred Gretsch is the fourth-generation President of the Gretsch Company and great-grandson of the company’s Founder, Friedrich Gretsch.