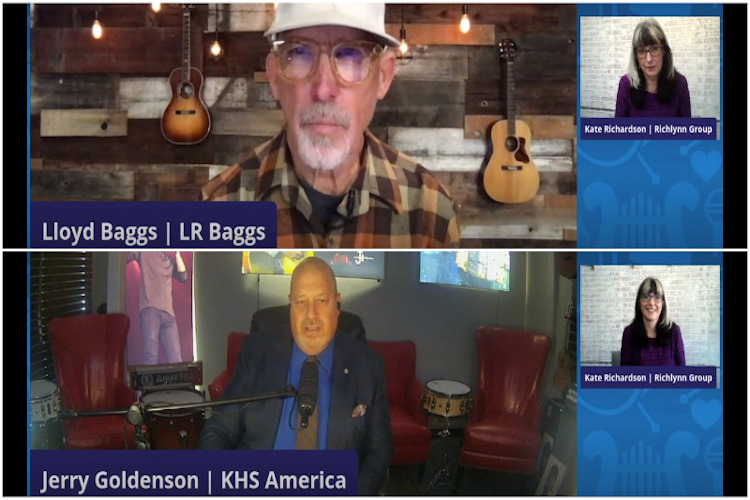 Lloyd Baggs, CEO of L.R. Baggs, does not sugarcoat how bad 2020 could have been. “I thought we would be in a soup kitchen,” he said during “Titans of the Industry Part I: 2021 Outlook and Beyond,” which on Jan. 21 was presented at NAMM’s Believe in Music Week. “But it is mind blowing how well the guitar industry seems to be doing. People are out there buying guitars like crazy.”

Baggs added he is “Blessed beyond logic for this to be happening. We did have to downsize. But with fewer staff and a lot of safety precautions in place, we have been able to stay open. I am amazed at the resourcefulness and creativity of our suppliers and partners.”

Baggs was also asked to provide advice for those getting started in the MI industry today. He cautioned that money cannot be your primary goal, although you can earn a living.

“I remember seeing an interview with Bill Gates. Even being the richest man in the world, the one thing he always remembered was being frightened all the time,” he stated. “Music has to be your oxygen. I love owning a business, but it is not for the faint of heart.”

Baggs added his philosophy when it comes to business and life: “Give more than you get.”

Jerry Goldenson, president and CEO of KHS America, was the second subject interviewed during the NAMM session. He noted the company has nearly 20 brands and it is focused on what it calls a “stimulus package” for retailers.

Although Goldenson did not go as far as Baggs did when talking about how bad business could have been last year, he did relay 2020 of course brought many challenges. “But it also presents opportunities,” he said. “Times of crisis often bring us together.”

Goldenson concluded with his business philosophy: “You have to be true to yourself,” he said. “You need to know you are making a difference.”