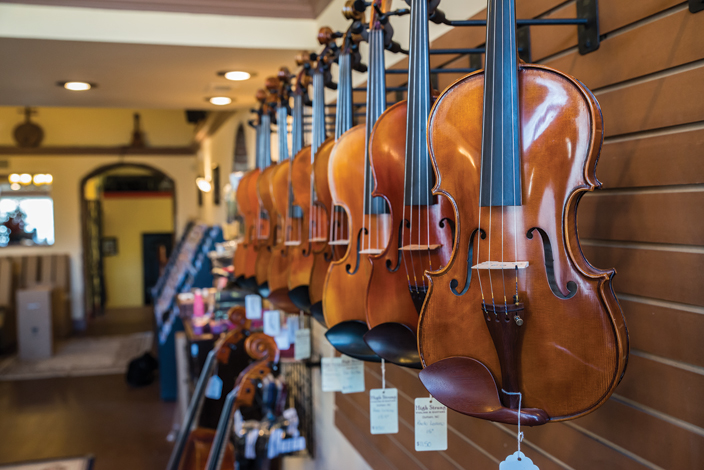 High Strung Violins & Guitars, Durham NC’s 25-plus-year-old music store, is on the move again, this time expanding from 1805 W. Markham to the corner building right next door. The former Trinity Lounge/Sirens venue is now serving up guitars and violins instead of wine and beer. The Grand Opening Party was held on February 22 all day; it featured performances from the Old Time, the Irish and the Ukulele Learning Jams that High Strung regularly offers. Concurrent with the move, and part of the catalyst for it, is a change of ownership. Damon Walker, a luthier who has been associated with High Strung for more than 10 years, and head of its repair department for two years, is taking the place of former Co-Owner Christine Spiak and partnering with longtime Owner Lee Raymond.

“We’re excited to move High Strung into its next stage, emphasizing our role as a community music store,” said Walker. “In addition to our weekly Old Time and Irish Learning Jams, we’ve talked with folks at the Music Maker Relief Foundation about bringing in musicians for workshops and house concerts. And our commitment to organizations like KidzNotes—we currently handle the repairs for all their stringed instruments—remains as strong as ever.”

High Strung was founded in the 1980s by Michael Kovick, who now lives in Floyd VA and continues to build instruments. The shop was on Perry St., upstairs next to the Cosmic Cantina. Kovick moved in 1999, selling his shop to electric guitar builder Ryan Gadow, who moved the business to Ninth St. and brought in Christine Spiak in 2003. Gadow sold his half of the business to Lee Raymond in 2006. Raymond and Spiak grew the violin and guitar rental program exponentially and, eventually, realized that High Strung needed more room. They moved to Broad St., between the Broad Street Café and Watts Grocery, eventually outgrowing that space, too, as the need to open a music school became more pressing.

“If you can’t help someone learn the instrument they just bought,” said Raymond, “then you’re only giving them half of what they need to make music. High Strung continues to evolve, but I think we’ve found a permanent home on the corner here. I came to music through Chicago’s Old Town School of Folk Music and I use that as a general model. I hope that, by the time I retire, High Strung will be a kind of ‘Old Town South’ where you can find professional musicians, students and jammers rubbing shoulders and learning from each other in classes, workshops and concerts.”