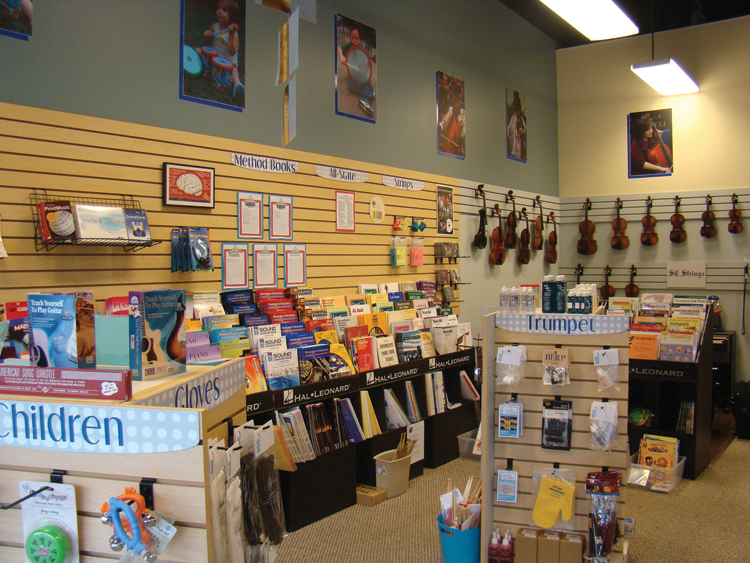 Head Of The Class

Tracy Leenman is not only the proud Owner of Musical Innovations; she also travels the country doing workshops and clinics, conducting, and teaching sessions for NAMM University and other music-education groups. Given how busy and prolific this current stage of her career is, it’s difficult to believe that, approximately seven years ago, Leenman was ready to give it all up for retirement.

Leenman had spent 40 years teaching band, choir and music theory and, after her kids had grown up, she eventually moved on to a music store at which she worked for an additional 15 years. By the time 2007 came around, Leenman was ready to pack it all in; her industry contacts, however, wouldn’t let her go that easily. Recognizing that she could still do more for her many loyal customers and colleagues—not to mention the South Carolina school music industry at large—Leenman returned to MI retail with a new business venture that would become Musical Innovations.

“In 2009, I started selling instruments again out of my house, going on visits to schools, and I established a business from that,” said Leenman, who holds a bachelor’s degree, master’s degree and Ph.D. in music education. “The manufacturers knew me from my other company, and those companies had faith in me and gave me a line of credit.”

In July 2009, Musical Innovations opened its doors in a 1,300-square-foot storefront within a local strip mall. “The day we opened, we had customers,” Leenman recalled with pride. “In the first year, 90 percent of the business came from me visiting schools, many of which didn’t work with other stores. Our biggest business is in junior high schools and high schools, but we’ll also do elementary schools because a lot of the other music stores don’t pay attention to them.”

Musical Innovations focuses squarely on the classroom music and band and orchestra instrument business. You won’t find any guitars or drums; you will, however, find all the major lines of band and orchestra instruments, plus the largest selection of flutes in South Carolina and a lot of high quality, handmade stringed instruments. There’s also plenty of accessories and print music. The store has three repair technicians and a custom flute shop. And, of course, it offers rentals.

“We have very good rental plans for families, so they can get instruments cheaper. And, we do everything on auto-pay, so it takes the decision out of it. When you’re writing a check, then you are deciding between paying the rental bill and paying for something else,” explained Leenman. As a result, she continued, “We don’t have many students who drop out, and we have a low return rate on our rental instruments as compared with the national average.”

Musical Innovations’ rental program has grown exponentially since the store opened. “Our first year, we had 100 rentals. Now, we do more than 1,000 per year,” Leenman said. One way she helps to foster the rental program is to offer Band Camp every summer for new students who are taking band class for the first time.

“Band Camp gets the kids ready and teaches them how to care for their instruments,” explained Leenman. “The kids learn to play some notes; we have game time and serve refreshments. It’s fun, and the kids go back to school prepared.”

Leenman has held the one-week camp every year for the past five years. With 100 percent of attendees ultimately renting their instruments from the store, she is able to boast an incredible return on her investment. “Back to school is the focus of all our marketing efforts,” she revealed, “similar to how a department store treats Christmas.”

Musical Innovations also has a booming lessons program that serves students of all ages: from four to 84. Leenman estimates that five percent of the store’s students are adults and, she added, many are home-schooled children who don’t get to take lessons in school.

“Music lessons don’t appear to be subject to the economic downturn because they give people pleasure,” said Leenman. “Kids today are overcommitted with after-school activities and they don’t understand how important music is to their education. But once they start the lessons, they see the benefits of it. We are always out there telling parents how important music is, and that makes a difference.”

The store recently expanded into some vacant spaces in the strip mall, allowing for the addition of new lesson rooms as well as a professional horn showroom and a warehouse. “We have had seven teachers sharing studios and giving lessons out in the hall,” said Leenman, who said the new store is three times the size of the original. “Now, with the expansion, they won’t have to share.”

With all the talk over the years about shrinking music programs in schools and budget cuts, it might be surprising to hear that so much of Musical Innovations’ business is dependent upon students. However, according to Leenman, those worries are not entirely founded because “people don’t realize where the crisis is.”

She explained, “Budgets and directors are being cut, but not the school programs overall. Ninety-four percent of school programs are stable. We are seeing the band directors under stress and quitting because of it, but we’re not seeing declining enrollment. It’s harder for the directors than for the students, because they have to do the same with less. They have less money to work with, but the same number of students.”

Leenman is continuing to add more road reps and is expanding her territory to include schools in western North Carolina and, eventually, northeast Georgia to help cover all the schools whose cash-strapped music programs are nevertheless as popular as ever.

“Our goal is to serve people who otherwise aren’t served,” said Leenman. “We want to offer the highest quality instruments at plans and prices that are reasonable so that everyone can participate.”