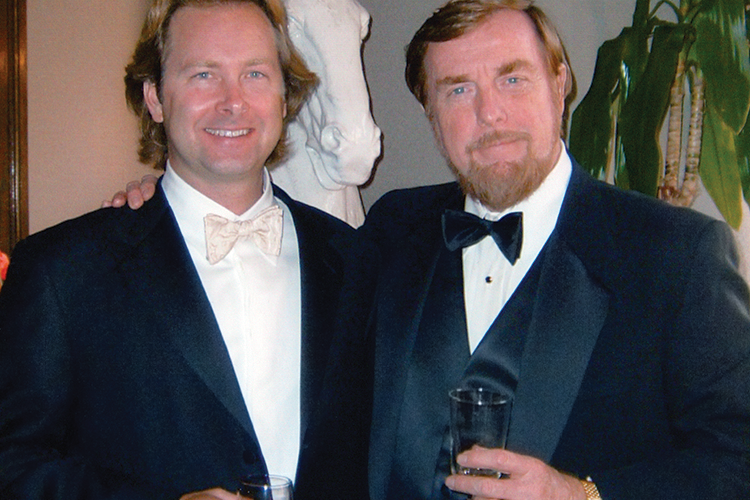 Peavey Electronics Corp. is certainly a company that needs no introduction. So, let’s dig right in and get the latest from both Founder and CEO Hartley Peavey and Chief Operating Officer Courtland Gray. Enjoy.

The Music & Sound Retailer: Hartley, you founded Peavey more than 50 years ago. What have been some of the greatest lessons you’ve learned and what has changed during that time the most?
Hartley Peavey: I founded Peavey my senior year in college, 1964. Actually, my first patent was in 1964, but I generally regard June 1, 1965 as Peavey’s official starting date. That was 52 and a half years ago, and I never thought that I’d ever be “the oldest man in the amp business,” but that is apparently what has happened. To survive for over 52 years in this crazy business has been quite a trick, and it still is. If I were to even try to catalog everything I have learned after over half a century, it would take up more pages than your magazine. Much of what I have learned has been kind of painful because of all the mistakes I have made. Every mistake (ours or others) is a learning opportunity, and I’ve sure had lots of “learning opportunities” over the years. One great advantage Peavey has benefitted from over the years is by closely watching the mistakes of our competitors. Incredibly, mistakes are often repeated by new ownership of companies in this business. Most of the major names have been bought and sold numerous times, and, while the brand names are the same, the organizations behind those brands is totally different! If “experience is the great teacher,” I’ve been in the classroom longer than anybody in our end of the business. People have often asked me what keeps my interest after more than five decades. The answer is simple. Every day I get to learn something! After 52 years of learning, you begin to realize that you have discovered a lot! The good news is that I’m still learning, and still applying those lessons to ever more innovative products. That’s just one of many reasons why Peavey has been able to survive so long under the same ownership and management!

The Retailer: Hartley, you’ve passed several responsibilities to Courtland. How long did this process take? What were the most important things you wanted Courtland to know?
Peavey: This is a complex question, but I’ll try to answer it by simply saying that Peavey has been a company that does not just make things, we also make people by creating opportunities and challenges. “Court” came to Peavey to begin our equipment leasing program. His background and training is in the financial domain and is one of the things that is not my strong suit. Court utilized his previous experience in leasing to bring success to that program. I then assigned him to other projects that needed attention. He also learned our processes quickly, and I realized that he could be a vital part of the team I was putting together to run the company if something happened to me or I decided to retire. After numerous changes of Court’s responsibilities over the past 16 years, he has taken over the day-to-day operations at Peavey as our chief operating officer. He brought a lot of previous knowledge to Peavey and has continued his education at Harvard Business School. Court’s abilities and mine are somewhat different, but he is a quick study and has learned a lot about this business by working with me, as well as the rest of our team.

The Retailer: Hartley, if you could write a quick elevator pitch about the company, what do you want Peavey Electronics to be most known for?
Peavey: When I started the company back in 1964-65, it was intended as a vehicle to allow me to do my thing. I never realized that the company would also be a vehicle for lots of other people to also do their thing. I started out with the prime directive to “be the best.” Obviously, one cannot be the best without being different. We are different. Peavey is one of the very few companies in our end of the music and sound business that is still run and owned by its founder. Peavey is proud to say that we have earned over 180 patents around the world. Most of our competitors have not earned even a single patent, which is sadly indicative of the “cow path” (copycat) mentality so prevalent in today’s marketplace. Another thing that I believe sets Peavey apart is its passion for our products and for our dealers and distributers in 136 countries around the world. We have gotten huge numbers of product awards over the years and we continue to introduce new and industry changing products at nearly every show we attend. We always take unconventional approaches, such as making our own loudspeakers. We were first to use computer-controlled machines to make guitars back in 1977! We revolutionized the commercial sound installation business with the 1993 introduction of our Media Matrix, the world’s first digital audio networking system. There have been so many things that Peavey has accomplished it would be hard to name them in a brief interview. I believe Peavey is better because it is different, and that is why we have been able to survive under the same ownership and management while most of our larger competitors have changed ownership, location and management three, four or five times over the last five decades. Down south, we have an old saying: “When you are making good biscuits, you don’t change the recipe!”

The Retailer: Courtland, please tell us about your background.
Courtland Gray: I joined Peavey almost 16 years ago.  Hartley wanted our finance company, PVF, to lease sound systems to churches and businesses, and I was working for a commercial finance and leasing company. I started the program for PVF and took over the management of PVF shortly thereafter. I became more involved in different parts of the business over the years and in 2003 I went to Harvard for its Advanced Management Course and became executive vice president and later chief operating officer.

The Retailer: Courtland, what’s the greatest advice Hartley has given you?
Gray: If anyone has ever been to one of our dealer seminars, they might recall some of the things Hartley hands out with various sayings and quotes. If you chase two rabbits, both will get away. There’s another one about the lion and antelope getting up in the morning. At Hartley’s Walk of Wisdom, behind our museum, there’s a plaque about not changing the recipe when you’re making good biscuits — exactly what he said earlier. That’s a good one. But Hartley always speaks of stickability and being able to weather the storm and to hang in there when the going gets tough. Keeping that in mind and persevering is a very valuable piece of advice.

The Retailer: Courtland, what separates Peavey from the competition?
Gray: I think the passion that the employees of Peavey put into making a different and better product is a big part of what makes Peavey a different company and separates us from the competition. We have enthusiastic, dedicated engineers and musicians at Peavey who really care about what goes into the products we make. It’s what’s on the inside that counts.

The Retailer: Courtland, please tell us about what you debuted at NAMM and what makes it cool.
Gray: We have our new powered line array, the Versarray Pro, based on many of the great features of the original Versarray, like a ribbon tweeter and a dual voice coil neodymium Black Widow speaker with a field replaceable basket. Now, it is powered and contains a powerful DSP with FIR filters. They can be linked together with network control using Ethernet or a Dante connection. We have redesigned the flyware using our FlyQWIK hardware that makes setup and configuration a breeze.

The Retailer: To both Courtland and Hartley: There’s been a lot of talk lately about the manufacturers getting stuck with the bill, as well as counterfeit problems on Amazon. What are your thoughts on this? Also, what is the importance of MI retailers to you?
Gray: Counterfeiting is a continuing problem we deal with all around the world. I am not aware of any issues on Amazon, but certainly the Chinese sites are loaded with counterfeits. We have distributors in various parts of the world who at times find some in their territory. We do what we can with them in their country, but it is very challenging to get cooperation and enforcement from the Chinese officials.

MI retailers have been the life blood of Peavey for 52 years. We want to do all we can to support and sustain them. An educated salesperson in a store can educate a customer about products better than most websites. That’s why Hartley has always pressed the dealers to learn about the product, so they can understand the customer’s needs. We have several dealer education seminars a year to help dealers do just that.

Peavey: Today’s marketplace has changed drastically since the 1960s and 1970s. We have tried to “selectively” change with it. The advent of China’s entry into music and sound brought about profound change in our industry, as well as the rapid proliferation of the internet- and web-based retailers. The aforementioned factors, combined with our industries’ tendencies to just copy or reintroduce older, successful products, have combined to create a difficult environment for both retailers as well as suppliers. Counterfeit goods are a huge problem around the world. Especially in the export market. Some of this is caused by the sad fact that anybody that can afford to bring in a container suddenly is a “supplier” and the goods in that container are often copies and sometimes counterfeit. I was raised in my father’s music retail shop, and I have had the good fortune to be able to learn the music business from the inside out, as opposed to others that tried to learn this business from the outside in. We have always tried to support our dealers, believing that a big part of our responsibility is to supply products that have the features, advantages and benefits to allow our dealers to sell our products profitably. Peavey was the first company to provide scheduled training seminars to its dealer on audio and MI products. We have continued to do this for more than 30 years here at our Training Center in Mississippi. That’s commitment!

The Retailer: To both Courtland and Peavey: There has been some talk about the death of the electric guitar. What are your thoughts
about this?
Gray: To steal one from Mark Twain, I think the reports of the death of the electric guitar are greatly exaggerated. The way people spend their personal time has changed greatly over the last decade, and I think people are starting to reevaluate their use of smart devices during those times. Sitting down with a guitar is a far more enlightening way to chill out.

Peavey: The talk of the “death of the electric guitar” is pure B.S.! The lure of the electric guitar has varied over the years and has always come back bigger than before! Anybody that thinks otherwise has never enjoyed the applause of an appreciative audience, especially applause from attractive young ladies!

The Retailer: Anything else to add?
Peavey: The wonderful thing about music is that it is all about passion. There are only about four or five things that people will fight you over and one of them (besides politics, religion and romance) is music. Passion is the driver and most of us are passionate about the music we like. And that’s good for the music and sound business. You might say, “once a guitar player, you are always a guitar player,” and thankfully you will rarely find a guitar player that has just one guitar! The “dirty little secret” about our industry is that those of us in it are having fun!