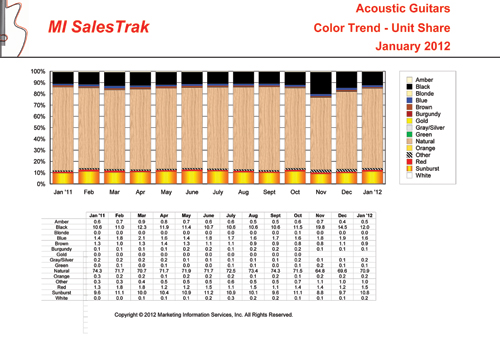 When looking at the economy as a whole, most would agree 2011 was better than its abysmal predecessor years. Unemployment dropped, the stock market did well (by year’s end, at least) and hefty Wall Street bonuses returned.

Closer to our own industry, the NAMM show reached record attendance in January 2011 and its Nashville Summer NAMM counterpart was received well, leading one to believe consumers’ appetites for instruments might be gaining momentum.

According to data presented by MI SalesTrak to The Music & Sound Retailer, guitar sales last year didn’t rise as much as general enthusiasm might lead one to expect. But, on the other hand, guitar sales rose for the entire year of 2011, as compared to 2010. Many would agree a gain in sales—even when small—is good. And the news looks much better for 2012 guitar sales, which we will discuss shortly.

As one of the accompanying MI SalesTrak graphs (see page 50) reveals, guitar sales increased by 0.8 percent during 2011, as compared to the prior year. The most strength last year was seen in acoustic guitars, which enjoyed a jump of 1.7 percent. Those figures refer to dollar sales, not guitar unit sales.

Although Progressive Music in McKeesport PA does not primarily sell guitars, Mark Despotakis, its Director of Market Development, said he saw 2011 guitar sales increase because more schools are incorporating guitar classes as part of their curriculum. “Granted, we are selling lower-end guitars, because they are for schools,” he said. “So, we did see an uptrend in guitar sales, but mostly instruments sold to school music programs.”

Contemporary Music Center (CMC), which has 2,500-square-foot locations in Chantilly and Haymarket VA, had a very good year in general in 2011, said Founder and Director of Education Menzie Pittman. “Our year-over-year (YOY) increase was 25 percent,” he said. “We worked hard to improve our fretted sales by adding a new line, and it has worked very well for us. In the fourth quarter (with the new product and a sale), we saw an increase of 52 percent. The real test for us will be a complete YOY comparison.”

The story was a bit different at Springfield Music in Springfield MO. Donovan Bankhead, its Owner, said his store’s guitar sales declined in 2011. But, he added that the main culprit for the decline was shedding several guitar lines that were not helping the store’s bottom line.

“So, while sales were down, our profits from those sales were roughly the same as the prior year,” he said.

Regarding MI SalesTrak’s assertion that acoustic sales are outpacing those for electrics, Bankhead definitely saw that trend at his store. “We did see a nice increase in acoustic guitar sales [in 2011],” he said. “I think, for many people, the appeal of the acoustic guitar is its simplicity, and the image of the singer/songwriter playing an acoustic guitar is a popular one in today’s culture.”

The same rings true at Progressive Music. “I think, in our case, it’s just easier for a school to outfit its classrooms with acoustic guitars instead of electric guitars, and that’s why we saw the sales increase in the acoustic category,” he said.

“Guitar sales have been pretty stable in recent months,” said Jim Hirschberg, President of MI SalesTrak. “2011 dollar sales eked out a gain of 0.8 percent versus 2010. Acoustic guitars were up 1.7 percent, and electric guitars rebounded from early declines to finish the year nearly flat.”

CMC saw gains in both electric and acoustic sales. “The biggest gain for us was in electric sales,” said Pittman. “I think the trend can go either way, depending on the buyer’s desire. Price point, quality product and the quality of the customer’s experience seem to be what is working for us. We listen to our customers’ needs and guide the sale accordingly. From our point of view, customer care is our best tool.”

“What strikes me lately is the sheer number of new models,” he said. “The industry saw more than 2,850 new models introduced in the past year. Of course, ‘new’ often means just a new finish or a minor tweak of some sort. But the trend is toward greater variety, with a proliferation of limited editions, artist models and semi-custom product offerings expanding the number of choices available.”

Early Returns Look Good
2012 is still young, of course, but, thus far, it appears that the economy—so vital to bringing customers into your stores—is holding up well. The United States finished February with an 8.3 percent unemployment rate, which, although weak, is much better than just a year ago. In January, the stock market had its best first month since the 1980s and, according to a slew of media reports, luxury purchases are back in vogue.

February was another good month with regard to the economy, highlighted by additional stock market gains. And the rest of 2012 looks excellent, economically speaking, according to research conducted by wealth manager SEI. The firm revealed in a February survey that 90 percent of financial advisors expected a positive 2012 return in the broad Standard & Poor’s 500 stock market index. Fifty percent of those financial advisors expect the 500 companies that the index tracks to return more than five percent when we say goodbye to 2012.

According to several experts, only one thing seems capable of derailing the U.S. economy: Europe. Economic problems on the continent—particularly in Greece—could make our economy tumble. However, a single potential stumbling block is much better than 10 or more factors that could—or did—curtail economic growth from 2008 to 2010.

Returning to MI, the 110th edition of the NAMM show encouraged attendees to “Make it Count.” More than 95,000 heeded that advice. Spirits were high, and the NAMM show reached yet another all-time attendance pinnacle.

Although new guitar product introductions might not prove to have the banner year they had in 2011, January’s NAMM show augured that 2012 guitar launches will also be robust.

Clearly, the positive vibes are out there. A good January and February, in both economic and NAMM show terms, would lead one to believe good things await MI retailers for the rest of 2012. More consumer disposable income usually means more money to spend on instruments. Perhaps customers will soon return to buying higher-priced instruments, as well, a market that declined rapidly during the recession, according to several retailers interviewed by The Music & Sound Retailer during the past couple of years.

But how about guitars? Are consumers selecting them as their luxury purchase of choice? As they say in politics, the returns are in, thanks to MI SalesTrak. As January often tends to be such a good barometer for the year as a whole, let’s take a look at the MI SalesTrak data for the first month of this year, which is also provided in pie chart form (see page 50) for your review.

January numbers were, in fact, excellent, as reported by MI SalesTrak. Electric sales, a weakness in 2011, roared back to life. “The guitar market saw some welcome growth at the beginning of this year,” Hirschberg told The Retailer. “January 2012 dollar sales of electric guitars gained 3.7 percent, and acoustics were up 2.4 percent versus last January.”

There was one negative area, however. “Unfortunately, bass players failed to join the party [in January 2012], as electric and acoustic bass sales fell off by 25 percent,” noted Hirschberg. “Maybe bass players were waiting for the big sales in February.”

Despite the one sluggish segment, with regard to guitar sales, retailers said that, overall, they had excellent Januarys at their stores. For example, Springfield Music is off to a roaring start. According to Bankhead, guitar sales were up a robust seven percent as of mid-February.

Despotakis is also seeing more guitar sales at Progressive Music thus far in 2012. However, sales of higher-end guitars continue to wheeze along. “Overall, we’re seeing a very small trend toward more expensive purchases,” he said. “The bigger trend we are seeing is more purchases in general. But those purchases are not on the more expensive side. We’re selling more stuff, for sure—just not selling the really expensive stuff.”

CMC had an excellent January, but February guitar sales were not as strong, responded Pittman. “My take on the economy is that it is still very skittish,” he said. “The customer is not relaxed with the idea that things are getting better. It would only take one piece of bad news and sales would be considerably affected. Our customers consider every dime, and they will shop anywhere if they feel it serves them.”

“However,” Pittman continued, “that being said, I am seeing a new trend develop. The customer not only expects extremely low prices, but they are also refocusing on the quality of the buying experience. This trend plays to the advantage of the independent dealer.”

The ‘Finish’ Line
Breaking down January 2012 guitar sales even further, natural finish remained the overwhelming color choice among acoustic guitar buyers. More than 70 percent of acoustic sales were of the natural-finish variety.

However, the exact figure, which came in at 70.9 percent, is down from the 74.3-percent figure in January 2011. “Black and sunburst finishes have actually gained in popularity,” said Hirschberg.

Black acoustic guitar sales grabbed a 12-percent market share in January, whereas sunburst achieved a 10.8-percent figure. Both results were an improvement of more than one percent compared to the same month in 2011.

Sunburst was the chief beneficiary of that decline; it finished a strong second at 21.6 percent of all January electric guitar sales.

Red was the only other color to grab a double-digit share of the electric guitar sales market, at 14.5 percent. However, that number declined from the figure it earned in January 2011.