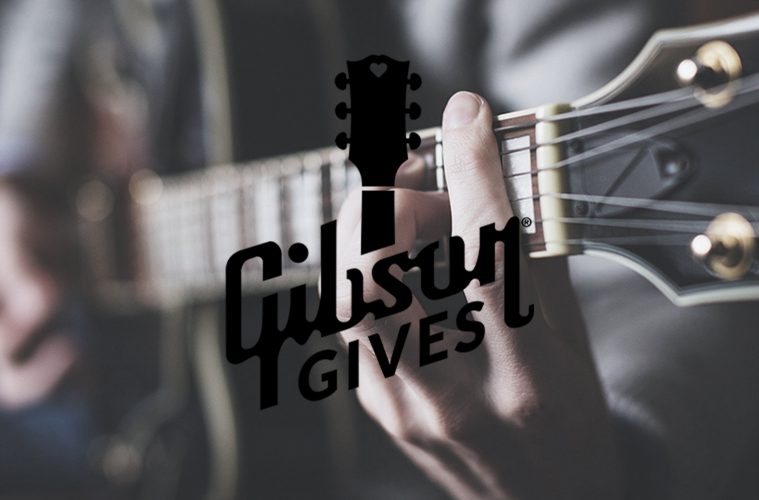 In July-2019, Gibson re-launched its philanthropic arm Gibson Gives. Upon its two-year anniversary, Gibson Gives is proud to announce it has raised over $2.5 million dollars worldwide through its mission of creating, developing and supporting non-profit organizations in their efforts to advance musicians, as well as youth-focused education and wellness initiatives.

Leveraging the success of Gibson Gives, the brand followed with the creation of KRK Kares, and has announced the launch of Epiphone Empowered, Kramer Kares and Mesa Mission. Under the umbrella of Gibson Gives — a 501(c)(3) organization — the above programs will follow the same success path and bring awareness to the charitable spirit of all the brands of Gibson. One hundred percent of all donations to and from Gibson Gives go towards giving the gift of music.

Gibson Gives recently announced the launch of TEMPO (Training and Empowering Musicians to Prevent Overdose) — a collaborative program with MusiCares, Harbor Path and seven non-profits — to save musicians’ lives in response to continued and elevated opioid overdoses from over a year of confinement and COVID-19 closures. TEMPO empowers participating non-profits and venues by providing the life-saving training necessary for using the drug naloxone to prevent opioid overdose.

Musician Forest Blakk talks about preventing opioid overdose and the importance of programs like TEMPO which directly impact the music community.

During the July-2019 re-launch of Gibson Gives, the foundation immediately committed to donating 1,000 guitars in 1,000 days to non-profits including music education, music wellness programs and musicians in need worldwide, and it has climbed above and beyond that initial milestone by donating over 2800 guitars in 700 days.

“When we announced we would donate 1,000 guitars in 1,000 days, I thought it was a lofty goal,” explained Dendy Jarrett, Executive Director of Gibson Gives. “We could have never predicted all the hurdles this past year presented in the music community and beyond. It’s been a humbling experience and an honor to work with so many worthy music and health programs in need, directly supporting and impacting individual people, as well as non-profits.”

Gibson Gives is committed to making the world a better place and helping those in need in the following ways:

Gibson Gives and KRK Kares work extensively with other charities, including MusiCares, The Recording Academy (GRAMMY’s), Guitars For Vets (helping U.S. military veterans with PTSD), Let’s Stay (In) Together, Apollo Theater Benefit, Women Who Rock (raised over $45,000 in October for breast cancer research at Magee Women’s Research Institute), Ryan Seacrest Foundation (placed Gibson instruments and KRK studio gear in all of their U.S. hospitals for recovering children and offered music-making lessons to cope with illness and PTSD), JoyRxMusic Children’s Cancer Association (arranged music lessons for hospitalized kids and teens facing cancer and coping with serious illness) and the Do it for the Love Foundation (a wish-granting nonprofit organization for people living with life-threatening illnesses). Gibson Gives became the exclusive stringed instrument provider for the Nashville based non-profit Musicians On Call (who arrange in-room and virtual performances by superstar artists with hospital patients) and donated high-value guitars for auction to support the Teenage Cancer Trust (London, U.K.). Gibson Gives also partnered with the NAMM Foundation for their Believe In Music 2021 program, raising $20,000 in three days; NAMM attendees selected the non-profit they wanted to receive their donation. 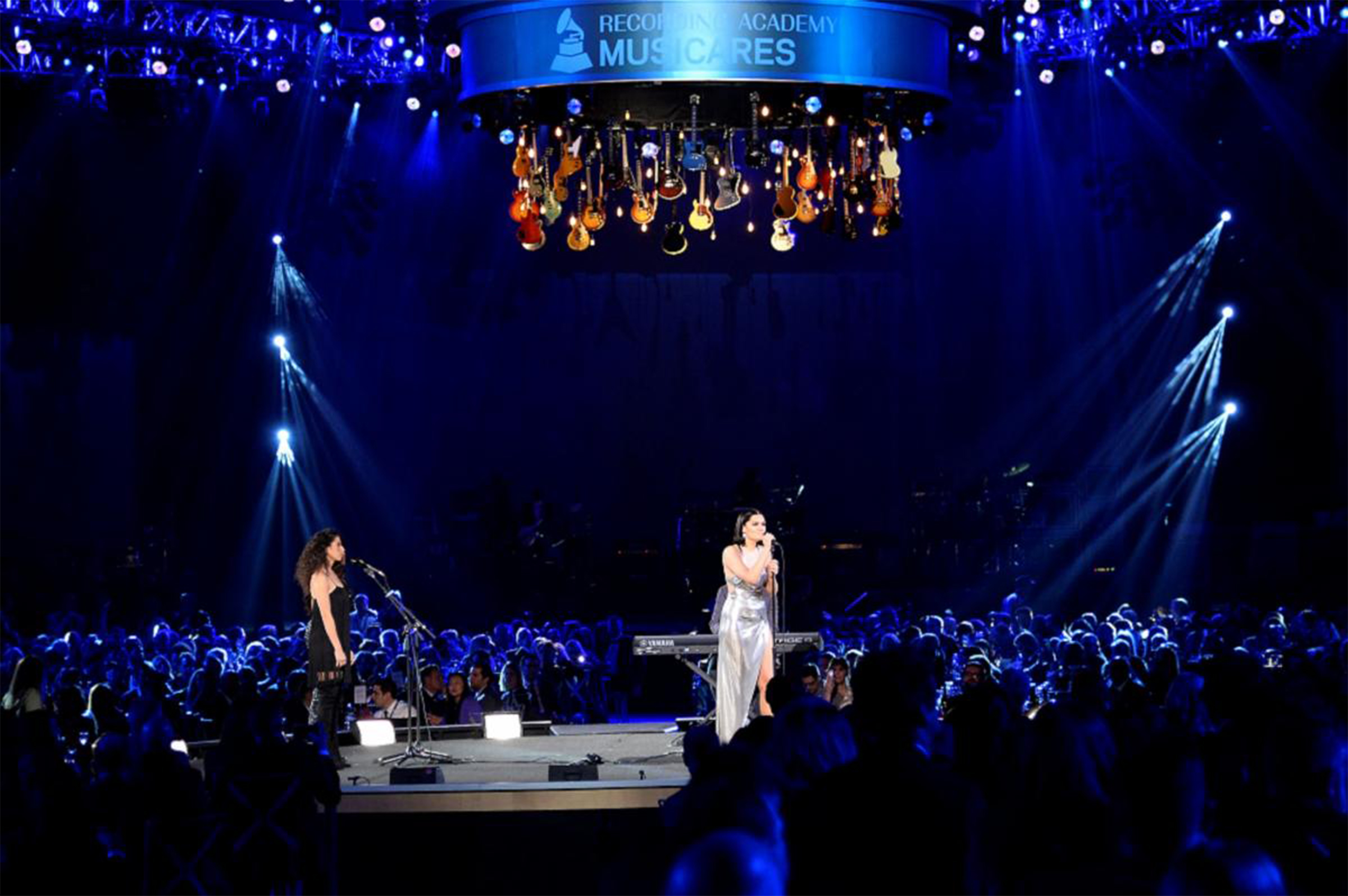 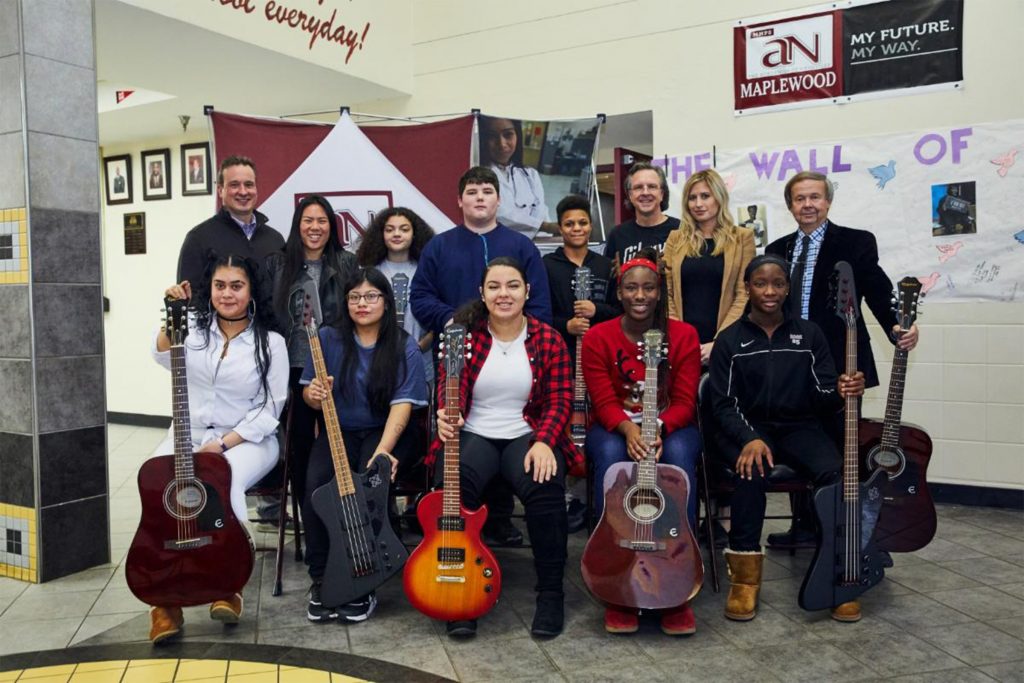 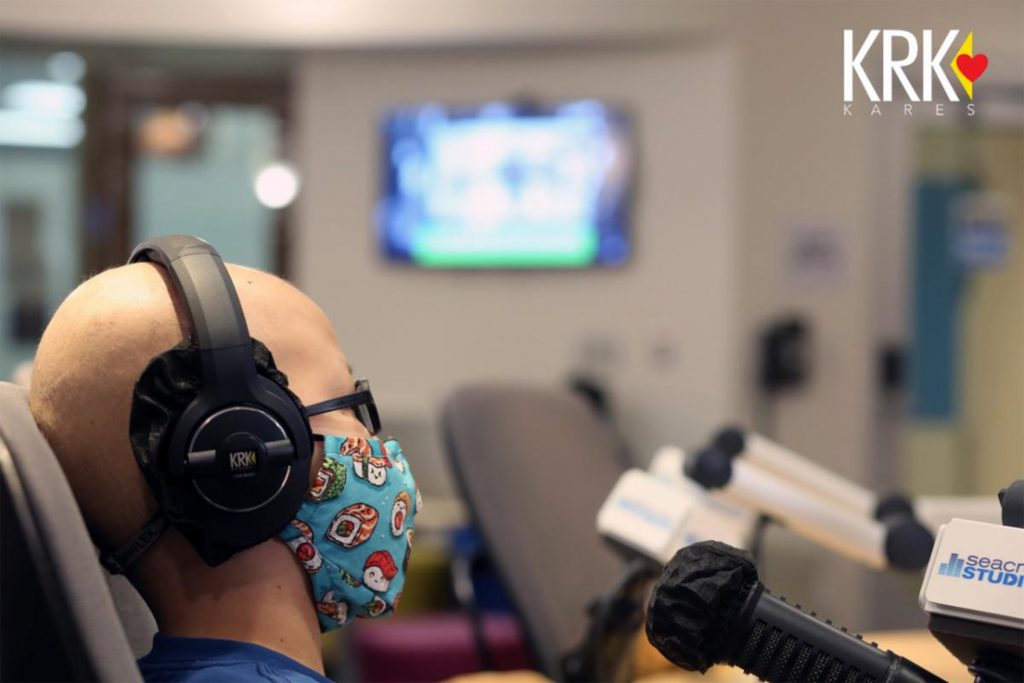 As key music programs in schools continue to be cut in the U.S. and worldwide, Gibson Gives accelerated its expansion and global footprint this year. The COVID-19 pandemic school closures made the need for access to music education and instruments even greater. Gibson Gives will continue to supply schools with music learning resources and instruments, including Manos Escuela de Guitarra in Aguascalientes, Mexico; in partnership with Sergio Vallin of Maná, Gibson sent 50 guitars to the school to support the teachers and students in Mexico. Gibson Gives placed instruments in schools in South Africa and Armenia, and when the entire Kingdom of Tonga was locked down to outsiders due to the pandemic, Gibson stepped in to provide guitars and ukuleles for a youth music-learning program at the local library. Gibson Gives partnered with Universal Music Publishing Group in China to identify schools in need of music education assistance and partnered with programs and schools to gift guitars and music accessories, including Playing For Change Foundation (placed 200 new acoustic guitars for their school programs in underserved communities across the globe), Notes for Notes, Life by Music, Samanlego School (Vitoria, Spain), Gallatin High School (Bozeman, MT), Maplewood High School (Nashville, TN), Give A Note, Music Heals Foundation (Vancouver, B.C.). The foundation also arranged music business workshops with the Save the Music Foundation for students to learn about jobs in the music industry.

Gibson Gives launched the Play it Forward program when Gibson helped local and national musicians in need by replacing guitars — regardless of the brand — lost in the devastating Nashville tornados of February 2020. Play It Forward allows Gibson Gives to act fast for events like COVID-19 and natural disasters, and those times Gibson learns of someone who is truly worthy of a gifted guitar.

On December 25, 2020, a bomb in an RV parked in downtown Nashville destroyed residences and buildings. Nationally known local musician and session player Buck McCoy was able to evacuate, but lost most of his personal belongings in the blast, including 12 guitars and his home studio equipment. Gibson Gives’ Play It Forward program was able to immediately replace Buck’s instruments (a Gibson Acoustic and a Gibson Les Paul electric guitar), and KRK Kares provided him with a pair of ROKIT monitors and KRK headphones. As a result, Buck was able to start working again on his weekly radio show. 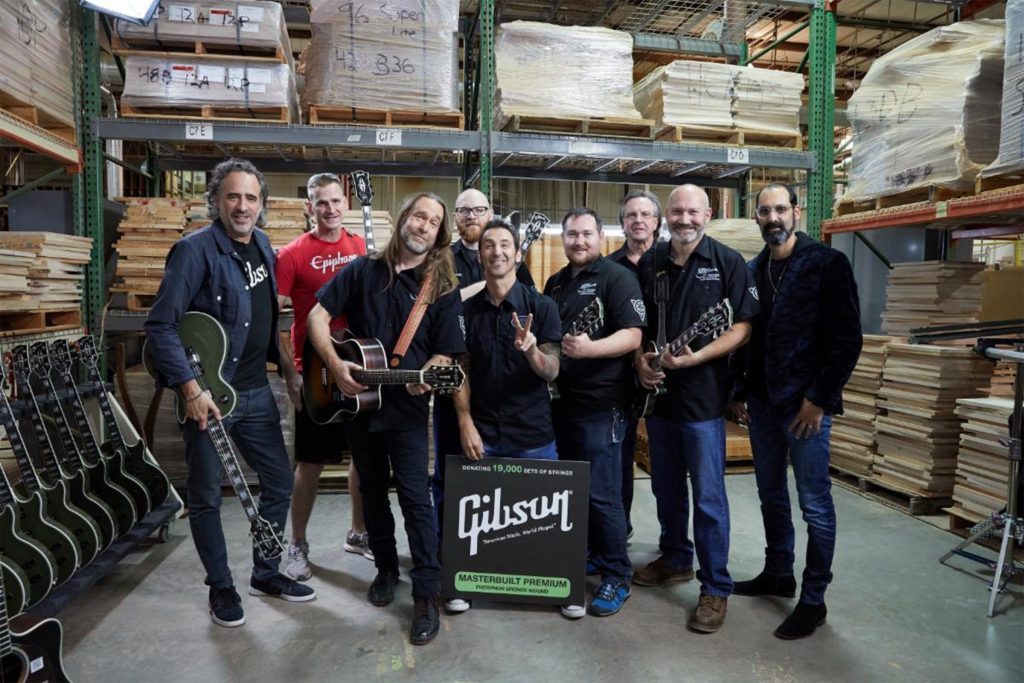 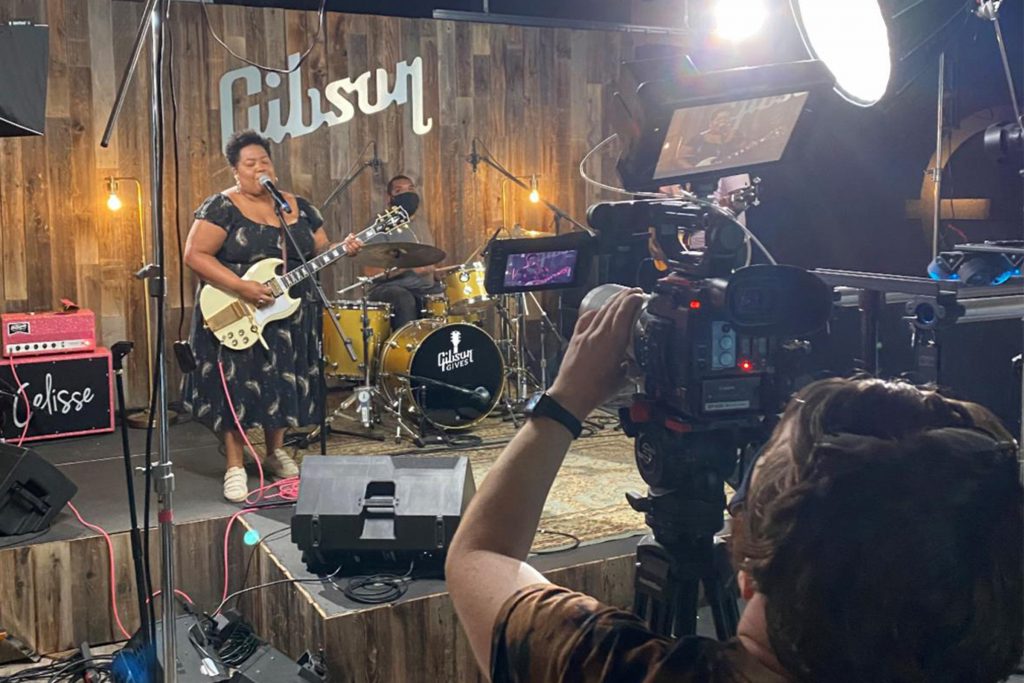 Celisse performs during the Women Who Rock concert (supporting breast cancer research) at the Gibson showroom in Los Angeles. 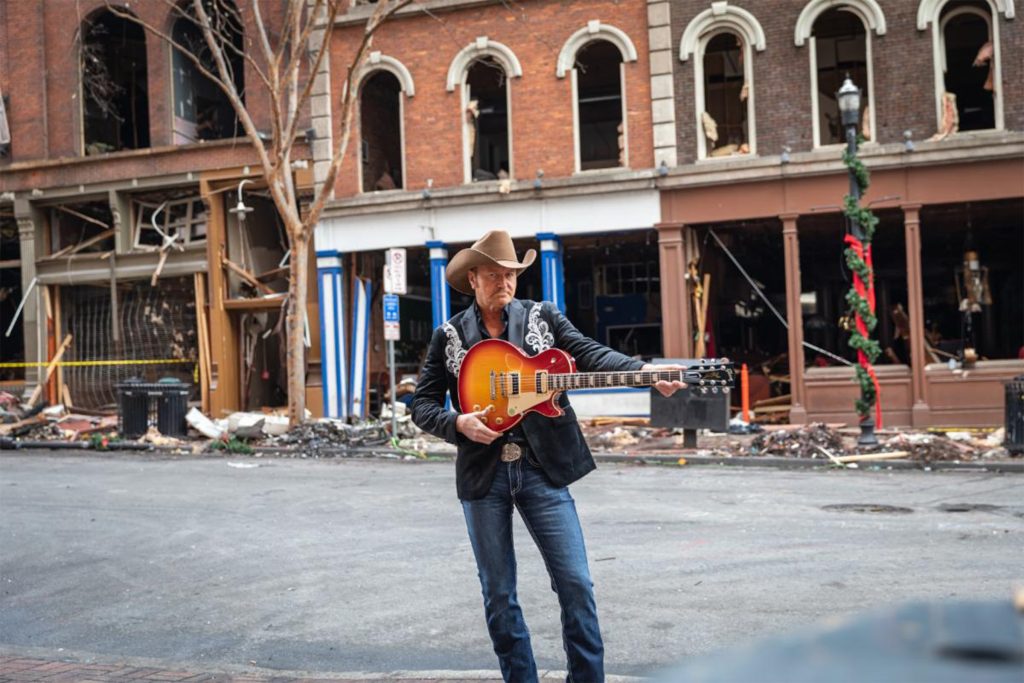 Musician Buck McCoy poses with his new Gibson Les Paul from the Gibson Gives’ Play It Forward program in front of his apartment which was affected by the recent Nashville bombing. 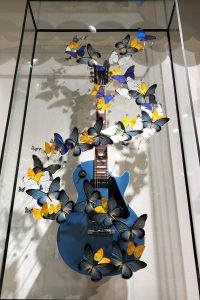 Earlier this year, Gibson Gives worked with renowned Parisian visual pop artist Benjamin Pietri to create a special installation at the upscale Le Bon Marché store in Paris, France. Pietri’s Gibson Flying Les Paul art installation sold for $10,000 USD. Pietri’s vintage figurines and musical instruments are all “Proust’s madeleines” which are sublimated in glass boxes by the colors and the poetry of butterflies from all over the world. Gibson Gives is planning more collaborations with Pietri and other visual artists this year.