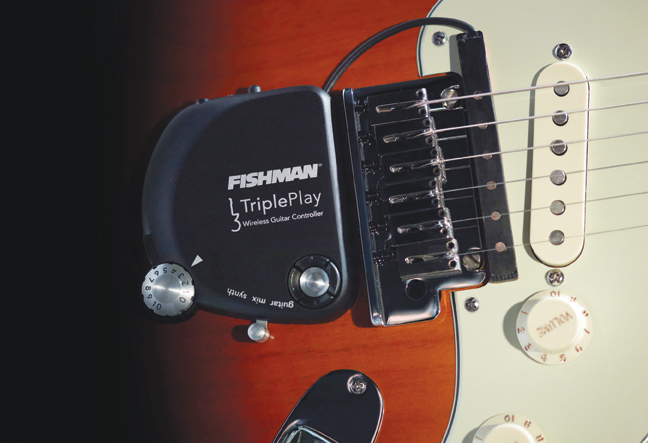 At this year’s Winter NAMM show, a number of impressive and exciting product debuts got MI retailers talking and ready to write orders, but perhaps none generated buzz quite equal to that created by Fishman, a company whose three decades of innovation now ascend to an entirely new level with the Triple Play Wireless Guitar Controller. This new wireless composing, performance and recording system, which the company showcased out in Anaheim and that we expect to see shipping in early summer, helped power Fishman to earn a prestigious Best In Show Award in the “Companies To Watch” category. We spoke to Larry Fishman, the company’s President, to learn more about Triple Play and how it has changed the terrain in the music-making world.

According to Fishman, this project has been in development for some three years, but he also admitted that, during the conception phase, he had some reservations about following this path; two principal considerations helped change his mind. “We realized that we could do it wirelessly very economically,” he explained. “That was a huge benefit, and it removed a lot of the difficulties and the downside of having to get a hexaphonic output off an electric guitar.” He continued, “And, when we started talking about what the system would look like, we knew that, in the wireless format, we could create a very small receiver that would be a USB format, and we could go directly into a computer or an iPad.” Thus, the project gained momentum.

Fishman remarked upon all the computer recording applications that are available today, ranging from modeling applications to simple DAWs, and sequencers to transcription software. Yes, all of these are now available, he noted, but there had not been a way to use those apps if you were a guitar player. “It’s like having the App Store, but no iPhone,” he stated. “So, I said, ‘Let’s do the iPhone for guitar. Let’s create a platform where we can leverage all these amazing apps that guitar players had been locked out of’.” The result is Triple Play, whose slim and intuitive form factor allows fast, easy setup so that guitarists can quickly have an unlimited palette of instruments and sounds at their fingertips, and all with the freedom of wireless control.

With respect to composition, with Triple Play, guitarists have the flexibility to compose with a wide range of instruments while getting full, accurate notation from the product to share music with other band members. Triple Play’s precise note-by-note transcriptions enable beginners to learn faster and more intuitively. “Previously,” Fishman began, “if you wanted to lay parts down with hexaphonic-input instruments, and you wanted to transcribe those parts and write sheet music, you’d have to go in and fix 50 or 60 percent of the notes.” He contrasted, “We’re offering something with incredibly accurate translation that will allow you to lay those parts down and—worst case—fix one percent or two percent of the notes…maybe none.”

With respect to performance, players can use Triple Play to combine their guitar with any virtual instrument or hardware synthesizer to access a wide range of instruments, samples and sounds on stage, enabling them to expand the depth and impact of live performances. “There are internationally famous, top-level guitarists like John McLaughlin who are traveling with this unit now and performing with it,” Fishman enthused. “He was part of our beta development. They’re creating exciting new kinds of sounds and music for guitar players by being able to exploit all the fabulous soft sounds available in computer synthesis right now.”

And, as if all that were not enough, we mustn’t overlook the recording angle. The easiest way to seamlessly integrate a guitar with a favorite DAW running on a PC, Mac or iPad, the Triple Play Wireless Guitar Controller becomes a complete music recording and production tool. Guitarists can build entire arrangements with drums, basses, keyboards, horns, strings, voices and more, all from Triple Play.

Triple Play comes with a wireless controller, hexaphonic pickup and wireless USB receiver. The controller, and included software, works with industry-standard DAWs and virtual instruments and installs quickly on any electric guitar. One can remove the system from a guitar easily; no permanent installation is required. The system features several “hold” functions, such as sustain, looping and arpeggiators, along with string or fret splits for multiple instruments. Also included are menu navigation controls for the included software and a guitar synthesizer volume control. A guitar, mix, synth switch is easily accessible during performances. A low-profile design (less than .5 inches) allows one to leave the controller on the guitar and still have it fit in the case. It operates with an included rechargeable lithium ion battery.

Fishman’s enthusiasm was palpable when talking about the abilities with which this product endows its users. “With the Triple Play wireless Expander, an optional battery pack, and a laptop or an iPad,” he began, “you could go to a desert island…the beach…sit in the back of a bus with a guitar and a set of headphones, and lay down string tracks, percussion tracks and piano tracks. Then, you could solo clean or distortion guitar straight off your normal guitar pickups on a separate channel. You could route that through Guitar Rig or the other modeling and signal-processing VSTs out there.” He continued, “With a portable computing device, the wireless guitar expander and a guitar, you have a 100-percent recording and composition workstation. You can sit down in an isolated, quiet area, create songs, create arrangements, return home, connect it to a printer and then print out parts for the band.”
So what, then, is Triple Play? Answer: It’s a direct, easy-to-use, high-performance, self-powered, wireless guitar controller with a direct computer interface. And it’s a gateway, Fishman stressed, not a gadget. “It’s a gateway into a whole world of applications, which guitar players had simply been locked out of before on their native instrument. They could get there on someone else’s instrument, but they couldn’t on their own.”

With an expected street price around $300 and a potential customer base as wide as the guitar market, in concert with Fishman’s enviable reputation for quality and innovation, Triple Play seems destined to be a home run.