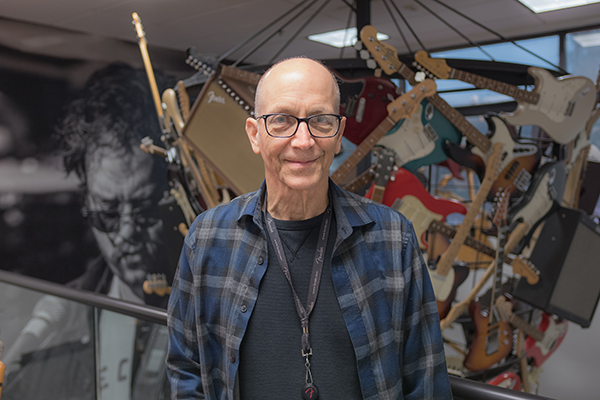 George Blanda, one of the original Fender Custom Shop founding members and most currently chief design engineer for guitars, is officially retiring on April 3, after a remarkable career with the company spanning 35 years.

“It’s hard to believe how much time has gone by,” said Blanda. “I’m going to miss the people the most, but I’m grateful to take all the memories with me.”

Blanda joined Fender in 1985 as senior design engineer in the newly created Fender Custom Shop. He was initially tasked with making artist signature models, but less than a year in, his role changed to meet a growing demand for U.S.-made products. He was recruited by then director of marketing Dan Smith, a pivotal figure in Fender history who was tasked with overhauling Fender’s ailing product line after years of decline under CBS.

Throughout his 35 years, Blanda worked on a variety of different projects. He began making artist signature models but pivoted to meet a growing demand for U.S.-made products. Enter the American Standard series, Blanda’s first gargantuan project, and one of the most significant launches in all Fender history. He was working alongside Smith on the introduction of that line. The American Standard series single-handedly helped restore quality, performance, value, and credibility to the Fender name at a time when the brand was in dire need of being revitalized.

Blanda never lost his passion for artist signature models, spearheading the Yngwie Malmsteen, James Burton, Muddy Water and Jimi Hendrix models along with the Eric Clapton relationship from the start.

“Fender’s Custom Shop has earned the title ‘Dream Factory,’ and for 35 years, George Blanda has made the dreams of thousands of players come true,” said Fender CEO Andy Mooney. “We will miss seeing George in Corona, [Calif.], every day, but George’s legacy at Fender will last forever. I wish George the very best for his retirement and want to thank him for the enormous contribution he has made to Fender.”

Throughout his tenure, he worked with Fender legends including Bill Schultz, Dan Smith, Bill Carson, Freddy Tavares, and countless others.