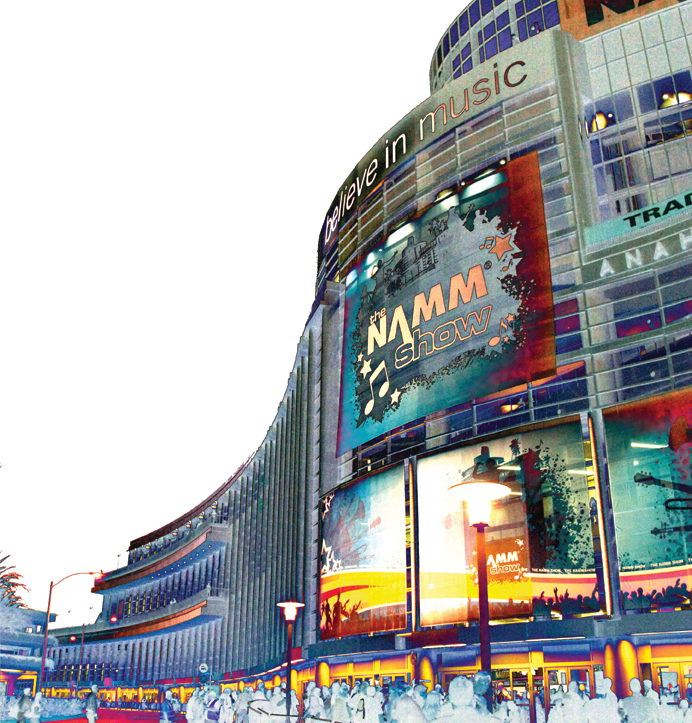 When one thinks about January, a few different things are likely to pop into one’s mind. There’s the conclusion of the holiday season, as decorations and ornaments are placed carefully into storage, awaiting their annual reappearance. For those who, like this writer, are in the northeast, there’s the punishing threat of snow and frigid temperatures, making it seem like aeons ago that the hot sand and rolling waves of the beach beckoned. For those involved in the music products industry, though, January represents the biggest month of the year, as tens of thousands of industry luminaries make their pilgrimage to Anaheim CA for the annual NAMM show, the world’s largest and most comprehensive music products exposition. The 2012 show, with all that it has to offer, will be held from the 19th to the 22nd in its customary Anaheim Convention Center home.

When asked about an overarching theme for this year’s event, Scott Robertson, Director of Marketing & Communications, NAMM, was quick to explain the organization’s thinking in the run-up to the show. “The broad message for this year’s show,” he said, “is ‘Make it Count,’ and it’s really all about the things that every exhibitor and attendee will do to make the most of every moment at the show for their business this year. As part of the counting theme, we used numbers, including 90,114 registrants, 1,417 exhibiting companies, 90 countries and four days, throughout the show marketing materials. But, when you think about how much happens over those four days and how it really shapes the year for most NAMM members, we wanted to reinforce how important it is to go in with a good plan in order to make every moment at the NAMM show count.”

We tend to be a rather statistical kind of species, always wanting to know the stats…the numbers…the figures. The consensus seems to be that the second half of 2011 was a relatively difficult period for MI retailers and, as much as NAMM can represent a welcome infusion of energy into the market, one naturally wonders whether the difficulties of 2011 will affect the figures for this year’s show. According to NAMM President/CEO Joe Lamond, though, all signs point toward strength. He remarked, “All of the exhibitor sales and attendee registration numbers we’re seeing right now [interview conducted in mid-November] are well ahead of last year’s figures at this time of year. And the buzz around the show really doesn’t ever disappear completely these days. On almost any given day, you can find someone talking about the NAMM show on Twitter, Facebook, YouTube and blogs. And, usually, it’s about how excited they are about exhibiting or attending or sharing one of their experiences from the show.” He added that he believes such excitement feeds and strengthens the show.

Whether one is a NAMM show newbie or a grizzled veteran, it is difficult not to be overwhelmed when one first sets foot on the show floor. So, what can attendees look forward to once they step onto the show floor this year? Kevin Johnstone, Director of Trade Shows, said, “NAMM show attendees can expect to see some of the coolest, most innovative music products from more than 1,400 exhibitors; great opportunities to network, learn and conduct good business; and they can also expect to be entertained with great live music from the time the center opens until late in the evening.” He added, “The NAMM show experience is really different for everyone and infinitely customizable depending on what the individual is looking to find.”

Of course, it goes without saying that the NAMM show will feature a veritable profusion of education sessions, the type of high quality, actionable content for which the show is known. Robertson provided a detailed rundown, saying, “The professional development department at NAMM has been working to create valuable educational sessions for NAMM University this year, beginning with the Breakfast of Champions general session all the way through the 43 Idea Center Sessions and the Hands-On-Training (H.O.T.) Zone, filled with sessions especially for the pro-audio and live sound segments.” One new addition to the H.O.T. Zone is The National Systems Contractors Association, which will host a mini-conference on “Best Practices in Identifying, Selling and Managing Systems Integration Projects.” Notable sessions on the schedule include Thursday’s Breakfast of Champions, where NAMM President/CEO Joe Lamond will once again interview interesting industry leaders and ask them about their secrets to success.

There’s also Friday’s Breakfast Session, entitled “Real-Time Marketing & PR: How to Instantly Engage Your Market, Connect with Customers and Create Products that Grow Your Business Now,” which will be taught by David Meerman Scott, marketing strategist and bestselling author of The New Rules of Marketing and PR and Marketing Lessons from the Grateful Dead. Plus, Saturday’s Breakfast Session, entitled “The Top 10 Web Marketing Trends for 2012,” will be led by John Arnold, marketing author and columnist at Entrepreneur.com. And, of course, on Sunday, NAMM wraps up with Best in Show, a look at the coolest new products on the show floor. A complete listing of NAMM University sessions is accessible at www.namm.org. Robertson added, “And we’re very excited to have The Music & Sound Retailer’s own Editor, Dan Ferrisi, conducting a retail panel session in the Idea Center called ‘How to Get an “A” from MI Spy’.”

It’s been said many times: “Don’t mess with success.” And, given how successful the NAMM show has been for years, there’s obviously little reason for any sort of dramatic overhaul. However, show management does continually refine the agenda, making sure it’s perfectly tailored to the needs and desires of attendees. According to Johnstone, a few new surprises are in store this year. “First,” he said, “we’ve really been reaching out to some of the newest and most innovative musical instrument and products companies, and locating those exhibits in Hall E to return that special ‘Innovation Alley’ feel to that area.” He continued, “Of course, our second annual App and Gaming Pavilion will also be there, and I encourage all of the dealers to spend some quality time in Hall E this year.”

“And,” he added, “over in Hall D this year, we’re working with In-N-Out Burger to produce NAMM’s California Cookout. We know how many In-N-Out fans are out there, and how some of them even leave the show floor to visit Fullerton or Tustin to get their Double Double. This year, they can stay right in the hall and enjoy their burger right in this new concession area. We’ll be doing a Jazz Lounge at the Sheraton, and we’ll have special quiet areas at both the Marriott and Hilton called ‘The Conversation Lounge,’ where attendees can conduct business in peace after show hours.”
Even with everything that the NAMM show has to offer—from the opportunity to get a glimpse of the latest product, to industry mind-sharing, to education and training, to fun and fellowship—it can be difficult for some mom-and-pop music products retailers to find funds in their budgets, and time in their schedules, to make the trip. Why is it so critical that independent retailers invest in going to NAMM? According to Lamond, “It’s because I think you will earn a return on your investment many times over in sourcing new and innovative products for your customers, better relationships with your current vendors, and ideas you pick up by attending NAMM U and Idea Center sessions.” He continued, “Einstein said that ‘insanity is doing the same things over and over, expecting different results.’ Perhaps this is happening far too much in retail today. NAMM show attendees have an edge that will give them a competitive advantage in their marketplace. And if they don’t go, their competitors most likely will.”
For those industry members whose yearly schedules are packed with trade expositions located throughout the country and the world, the first words to come to mind when thinking about the next show might not usually be “fun” and “enjoyment.” When it comes to NAMM, though, it’s all about working hard and playing harder. Robertson said, “When the show ends, the experience is just beginning at the NAMM show, and this year will be no exception. First, at close of the show on Thursday, we will honor those we lost at the Tribute. Then, there will be a party at the John Lennon Educational Tour Bus in celebration of its 15th anniversary, featuring Bootsy Collins and his all-star band. And then, on Friday, we’ll host the Legends Jam, where some of rock’s most influential players will jam together on the main lobby stage.”

“As that’s wrapping up,” he continued, “NAMM is proud again to host the TEC Awards at the Hilton, where winners will receive the professional audio industry’s most prestigious recognition of achievement in technology innovation and sound production. On Saturday night, we’ll have the Celebrity Jam, which is a real treat featuring some of your favorite movie and TV actors, writers and sports stars. And, as that is wrapping up, we’re hosting the finals of the 2012 SchoolJam USA competition over at Downtown Disney.” He exhorted, “So come out and watch these great stars of tomorrow battle for the title of the best teen band in the U.S.A. YouTube prodigy Grayson Chance will emcee the event and perform a couple of songs, too.”

Earlier, it was noted that NAMM typically provides an infusion of energy into the music products business, getting things off to a strong start every year, and the galvanizing effect of a show like this isn’t lost on Lamond. He said, “NAMM offers a place for the industry to come together to do business, learn and network that just isn’t offered anywhere else. This goes way back before my time here; generations have made the NAMM show the most important annual business and learning destination in the industry.” He continued, “Our job is not to mess it up! But, seriously, the NAMM show is the first show of the year, where all the new products are launched. It attracts buyers, large and small, from around the globe…and it’s in sunny California. It is my sincere hope that we will get those retailers who have thought about going to take that step and change their lives for the year ahead.”

So, there you have it. Is this a show that you feel you can afford to miss? Especially as difficult, tumultuous economic times continue to threaten the robustness of our growth—both as an industry and as an economy—it is critical that industry members partake in all that NAMM has to offer. Lamond wrapped things up, saying, “More people, of all ages, are making music today than in any time in history. They are changing the way they do it, for sure. Using technology to make it easier to make and record music is a great example. But things are changing rapidly, and the only way anyone in business today can keep up with these changes is to attend the industry’s number one trade event: the NAMM show.”

He continued, “By seeing what products are being introduced and being talked about, by seeing what topics are covered in NAMM U sessions, and by speaking with your friends, peers and suppliers, you will get the best look at the trends shaping our future and, therefore, have the best possible chance of positioning yourself and your business for success. And there is a pretty good chance you will have to compete with someone in the marketplace who has attended this year’s show, thus improving his or her own chances of survival and success. So, prepare yourself by taking advantage of all that the NAMM show has to offer.”

Editor’s Note: For those who do travel to Anaheim, I’d love to meet with you and hear your take on the industry of which we’re all part. The Music & Sound Retailer will be situated at Booth #4700. And, don’t forget to check out our Idea Center Session on Saturday!