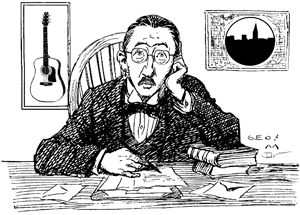 As I write this, we’ve just passed Black Friday and the much-vaunted Cyber Monday. Reports that sales were slightly higher than expected in the brick-and-mortar retail sector, and as much as 18 percent higher online, can be taken at face value, although the results raise questions about what the data truly means. Did epic deal offers shake all the money loose at once, or is there strength this Christmas? Did the (nearly desperate) call to action as early as Thanksgiving evening result in profits, or just churn? By the time you read this, it will be chewed over and spit out as a final result.

For me, in my store, in this industry, it doesn’t matter. Physically removed from the malls and major shopping centers, without a major Web commerce presence, we don’t stand in the reflected glow of all the hoped-for consumer frenzy. Our Christmas shoppers are—and have always been—our students and those who buy for them, plus the customers in our community who look to us for their music needs. The good news is, those people are buying. The downside: We have little to sell them.

Sure, we’re light on inventory, having cranked the belt tighter than the corset of a Victorian-era fashionista. Hunkered down in the live-within-your-means zone, we’re paying down debt and stocking smaller quantities of any item we can move quickly. But, thankfully, our customers know us and (one slight benefit from the general familiarity with online purchasing) don’t have a particular resistance to ordering items through us. They seem to treat it as a combination of buying local and having a personal shopper. They certainly know that we’re going to work hard to make sure the item is right for them, both before and after the purchase.

They also know we want them (or the recipient) to succeed and have fun making music. That’s difficult to take away from a faceless transaction or from a less-than-personable shopping experience in meatspace. It’s the one thing we can offer to compensate for a smaller store, fewer SKUs and pricing that can’t always match the big guys.

In many cases, it’s enough. I’m gratified that so many of our customers order items we don’t have in house, and often do it gratefully. “Thank you for taking care of this for me!” is a comment I hear a lot. We take the stress out of the experience for them. No worries about cyber crime…no damaged box left next to the front door…no need to find someone to make the instrument playable after the box is opened. No, you won’t hear me complain that everyone buys online. I’ve been lucky to gather some great customers, and I try to work every minute to make sure my luck holds. I remain firm in my opinion that there is a large chunk of the buying public that is pleased to be treated well and will reward that experience with loyalty and trust. Certainly, there are “price above all” customers, impossible-to-please customers and dishonest customers. They have always been around, and I certainly saw plenty of them in my years at Sears. That was before the Internet, when phones were just screenless lumps tethered to a wall. Now, though, difficult customers can travel in swarms to each Groupon deal and Yelp listing, so they can seem like a plague of locusts to the unsuspecting.

It’s easy to believe that there’s no other reality than the social media consumer. After all, if Facebook can help topple foreign regimes, how can retail withstand the onslaught? But that overgeneralization misses a point. There’s still a “social” in social media, and we’re still social creatures. My friends who are the most active on Facebook still use it to report about their exploits with friends. Yes, they overshare—but they do so in person, too. It’s just a broader audience online. No, I still believe that connecting with customers is desirable, beneficial and profitable. It’s also hard work that’s not always rewarding. Kind of like life, actually.

The flip side of this, though, is my gripe this season. I’ve connected with my customers. I’ve sold them on the benefits of the products I can offer them. And I’ve won the sale, despite anything the Internet or the big-box chains from this or any industry can throw at me. I win. Except…I can’t get the product. It’s backordered. It hasn’t come in yet, or it’s gone for the year, or I’m too far down in the line to get one. It’s not just the “hot ticket” items, either. I can’t call up anyone without hitting an “out of stock” wall, even on mundane items such as cases.

No, it’s not everyone. But I’m not just talking about one-off sales of products I don’t normally carry, either. A month before Christmas, I have in house orders for more than $5,000 worth of flutes I might not be able to get. Another $1,000 in guitar sales is gone because I can’t get the model, color or price point in the store—and someone online can. Violins, bows, books…you name it, and I’ve missed out because of short supply.
Of course, I know that suppliers are strapped—some perilously so. The hit that many companies have taken from insolvent dealers and slow-paying accounts has shackled them. But some are frozen into a “duck and cover” position because they’re afraid the next store to tank will be one of their customers, and they’re all about limiting exposure. I understand. But companies like Sweetwater have been touting—successfully, it seems—their non-participation in the recession. It would be great to get that message from the supply side, aimed at small dealers. I think it would be strategic, too: Those who can survive now are leaner, focused and likely the companies that will grow to shape our industry in the next decade. Look for them at the NAMM show and in the year ahead, and reach out to them. They’ll remember you as the one who helped them get beyond this.