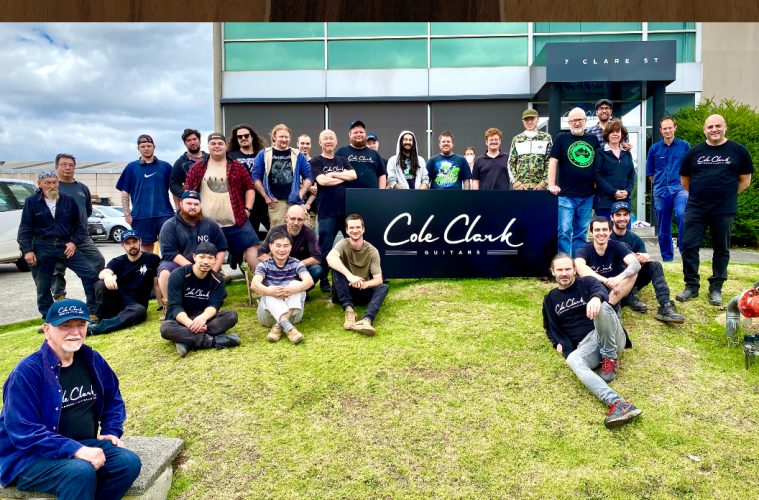 In 2001, Cole Clark Guitars set out on a mission to produce a lighter, stronger, sustainable and unique sounding acoustic with a natural pickup for the modern guitarist. While 20 years isn’t a long time in the world of guitars, that mission has led the Melbourne manufacturer to take enormous leaps in acoustic design, pickup technology and sustainability. Cole Clark proudly celebrates Twenty Years.

“I’m proud to be part of a company that maps its own path and truly engages with the evolution of live acoustic artists,” said Miles Jackson, CEO and Founding Member of Cole Clark Guitars.  “I’m thankful to  our dedicated staff, domestic and international dealers, our distributor network and of course, the artists who drive us to keep innovating and growing with them.”

Not being bound by tradition and having access to CNC machinery from the beginning, Cole Clark was in the rare position to create designs that wouldn’t have been possible in such numbers prior to the technology being available. An integral heel, internal carving and routed bracing channels are all world firsts for steel string guitar manufacturing and contribute to the strength and unique character of their instruments.

As well as that unique acoustic character, Cole Clark are well known for having the most natural sounding pickup on the market. This has been a focus in every part of their design process. Simply put… rather than building a guitar and putting a pickup in it, they designed a pickup and built a unique sounding acoustic guitar around it.

Early models comprised 6 under saddle piezo elements with a patented face sensor which has seen several iterations since its first release in 2003. In 2010, a condenser mic was added to create what is now known as the 3-way system.

Use of indigenous Australian timbers meant Cole Clark guitars were always made with predominantly sustainable woods. In 2015, by replacing Rosewood and Ebony fingerboards with locally sourced alternatives, they released their first entirely sustainable guitars. Now, 98% of the annual build has no endangered timber and 40% or their timber comes from urban recovery projects.

Cole Clark continues to evolve with the modern player in mind. In 2019, the ever-growing number of guitarists adding electric pickups to blend with acoustic tone prompted a line of dual output Humbucker models that offer uncompromising acoustic and electric tone that’s perfect for blending or looping.

Cole Clark will produce its 50,000th guitar this fall.