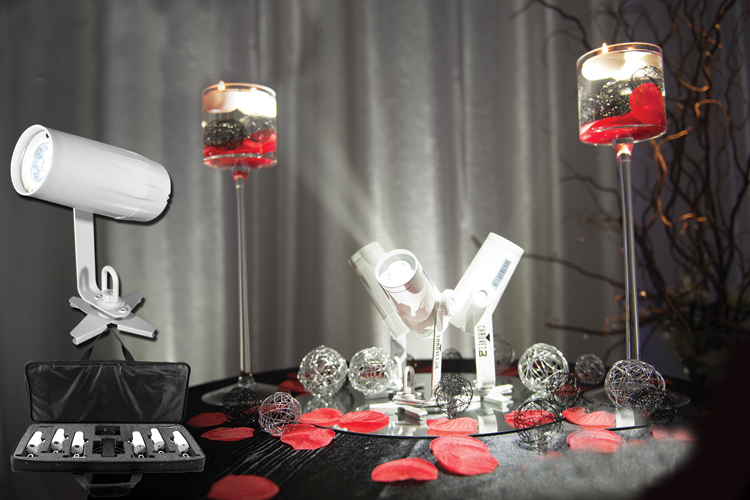 The dealers that compose the music products industry have really embraced lighting products over the past several years, recognizing that not only can lights draw in new customers and pad retailers’ bottom lines, but they also can be utilized in-store to make the rest of dealers’ inventory that much more irresistible to browsers. There’s never been a better time to bring lighting into your store, either, because the industry’s shining stars—such as CHAUVET DJ—have been aggressively innovating, devising new products at a pace that, frankly, makes it challenging for editors like me to keep up. CHAUVET DJ’s EZpin IRC, however, is one product that’s firmly on my radar screen; this battery-powered pin spot, which has made a big splash since the company exhibited it at NAMM, ought to be on yours, too.

The EZpin IRC is firmly part of the wireless revolution, and Allan Reiss, Senior Product Manager, CHAUVET DJ made clear the power—and the benefits—of wireless’ ascendance. “Everyone is asking for wireless this and wireless that; they want everything wireless,” he remarked. “It saves lots of time setting up. Entertainers can walk into a venue, check it out and place the fixtures wherever they want them.” He continued, “With wireless, performers don’t have to worry about the electrical supply of the building and don’t have to limit themselves to where the outlets are. It opens up a world of flexibility.”

The EZpin IRC’s origin is traceable to a team meeting that hatched the idea for a battery-operated pin spot. CHAUVET DJ spoke to several dealers and end users, asking all the pertinent questions and doing critical market research. At the end of the process, Reiss and the team determined EZpin IRC should be a white fixture, in order best to target the product to the wedding and bar mitzvah markets. Reiss explained, “We went with a cool white LED instead of a warm white LED because, if you want to make a cool white LED warm, you can do that simply by adding a filter, which we include. However, if you have a warm white LED, you can’t make it cool. So, with this, you can achieve both without stocking two separate units.” And, with only about four months separating conception and finalization, dealers and their customers didn’t have to wait long for this revolutionary lighting innovation.

One thing that has made the EZpin so popular centers on the different mounting options. “With a standard clamp, you can rig it to your truss,” Reiss stated. “Additionally, there’s a magnet built into the yoke that, obviously, makes it possible to affix it to anything metallic: a drop ceiling, a speaker, anything metallic that’s nearby.” The main attraction, however, is probably the EZpin IRC’s unique scissor clip with an eye loop, which allows the fixture to attach to drop ceiling supports without requiring time-consuming cabling. “It allows the fixture, because it’s wireless, to go anywhere,” Reiss enthused.

EZpin IRC comes with a five-pack of gels: red, green, blue, yellow and warm white. “Just in case somebody wants to add a little accent in a color, you can do that,” noted Reiss. “Warm white will be the most popular one, because a lot of people like to switch between the two.” The product is available as a single unit or, alternatively, the EZpin Pack bundles six EZpin IRC fixtures and an IRC-6 remote with a VIP Gear Bag. Although the single unit doesn’t come with the IRC remote, the product does work with it, enabling users to turn the fixture on and off easily. “I think the EZpin Pack is going to outsell the single by 100 to 1,” Reiss said. “The reason is, most people don’t need just one. Plus, it’s nice having a VIP Gear Bag that holds everything you need.”

The LED light source is, as mentioned, a cool white LED that is rated at two watts and that boasts a 50,000-hour life expectancy. According to Reiss, “Some people might be discouraged by the wattage. They might think, ‘Oh, it’s not bright enough,’ because they’re used to comparing products based simply on LED wattage. That’s just a huge mistake.” Despite its compact size, EZpin IRC makes a big impression with its intense, clearly defined light. Its battery can run for six hours before a user has to recharge it, which underscores its suitability for weddings.

Reiss emphasized the universality of a product like this relative to possible users. “It’s suitable for any mobile entertainer,” he declared. “If you’re in a band…if you’re a DJ…if you’re an event planner, this is all you. If you’re in the entertainment industry and you go from venue to venue, this is for you. Anybody can find something to do with it.” And that is perhaps one reason why praise from within the industry has been so effusive. CHAUVET DJ’s EZpin IRC has been at every trade show since its launch: NAMM, Musikmesse Frankfurt and others. “It’s one of the most talked-about products at every show,” Reiss added. “You know what I’ve heard? ‘Genius!’ You can’t beat that. The demand is very strong. It’s wonderful for us.”

As should be obvious by now, there’s already a buzz in the industry about EZpin IRC. However, that hasn’t stopped CHAUVET DJ from investing considerably in getting the word out. “I’m a product guy,” Reiss began, “so we do a lot of product videos and we also travel to all the trade shows, specifically the DJ ones, and talk. We do seminars at some of these trade shows, and we get our ‘feelers’ out. We also get out there and ask questions. I have a group of specific dealers—some of our top ones—that I e-mail and communicate with on a very regular basis. So, we’re making phone calls to key dealers, producing product videos and hitting the trade shows.”