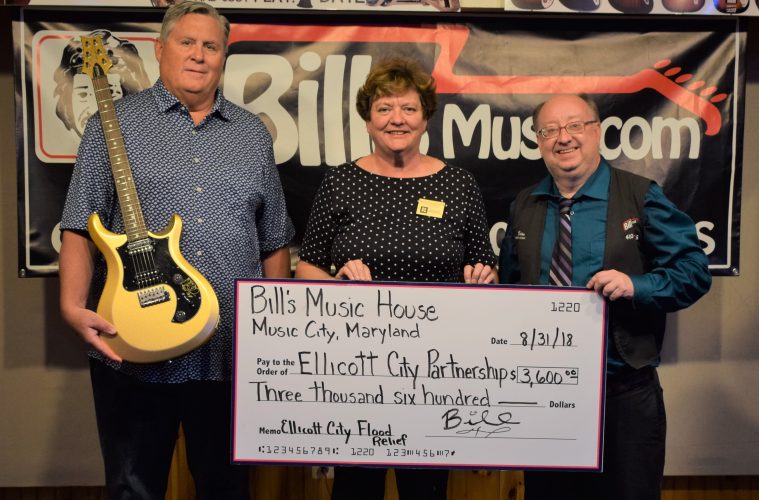 On Memorial Day weekend, Ellicott City, Md., a quaint, historic town located just 30 minutes west of Baltimore, was hit with more than two months’ worth of rain in less than two hours. The flooding caused Main Street to turn into a raging river, taking out anything in its path including residences and businesses, similar to the devastation it endured just two years ago. MI retailer Bill’s Music, the family owned music store located less than four miles from the small town, wanted to help.

“Our heart just went out to the victims, our neighbors, and we knew we needed to do something to lend a hand,” said Brian Higgins, manager of Bill’s Music.

With support from Maryland guitar manufacturer Paul Reed Smith, Bill’s Music was able to raffle off a beautiful gold PRS S2 guitar, autographed #ECSTRONG by Smith himself. Along with T-shirt sales, the guitar raffle raised $3,600, which Bill’s Music happily presented to Maureen Sweeney-Smith of the Ellicott City Partnership. This money will go directly to aid the victims of the 2018 flood and help with rebuilding efforts. Frank Longley, a resident of Ellicott City, purchased 10 tickets at Bill’s Music for the raffle and was the lucky winner who took home the brand new PRS guitar.

“On behalf of Ellicott City, thank you to Bill’s Music and the entire Higgins family for all of your efforts to help Ellicott City,” said Sweeney-Smith. “All of the support we’ve received means the world to the business owners and residents of our town.”