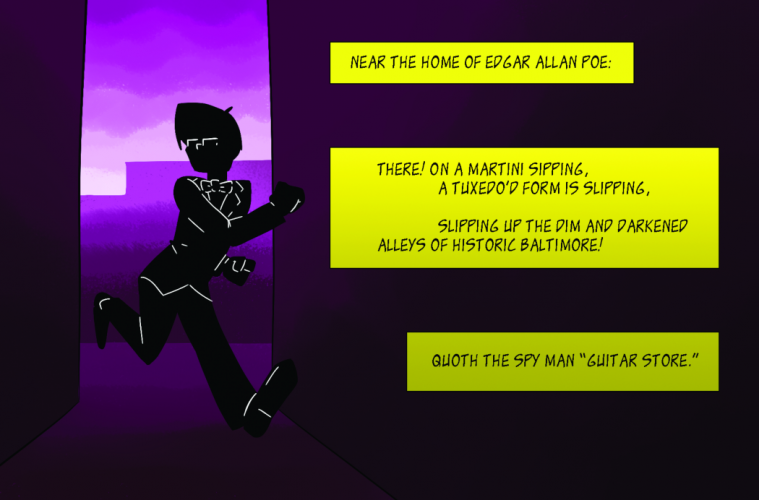 Being Charmed in Charm City

MI Spy goes to Washington, D.C., a lot, but Baltimore, although visited a few times in the past, often gets overlooked due to its proximity to our nation’s capital. Let’s give it some love this month, shall we? I am a major fan of American history and culture. I also love baseball, and few places are better to see “America’s Pastime” than Camden Yards, which set a standard by being the first ballpark in the mold of the much more beautiful stadiums we see today, compared to run-of-the-mill cookie-cutter ballparks that were in vogue in the 1970s and 1980s.

In addition to visiting MI stores, I also got to see several interesting sights and sites, such as the Walters Art Museum, The Washington Monument, the harbor area, the American Visionary Art Museum (that one I have to check out fully sometime), Basilica of the National Shrine and more. It was such a quick trip in and out — more of an introduction to this storied city. (In a few areas, I also passed by junkies stumbling around, which was not a wholesome sight.)

An interesting group of celebrated musicians has ties to Baltimore: Tori Amos grew up here and attended the Peabody Conservatory of The first thing that caught my eye, as I entered the Brothers Music shop in the Old Goucher neighborhood, was a tribute album, “Baltimore Does Bowie,” with a cartoon rendering of the legendary musician in his “Ziggy Stardust” persona. That and a wall decorated with signs including a “NO Stairway to Heaven” poster, a refrain made popular in the movie “Wayne’s World.” I could tell quickly that this is a quirky, small musical instrument store, stuffed to the gills with an impressive variety of instruments. Synthesizers, guitars, Music; jazz drummer and bandleader Chick Webb was born and died in the city; Philip Glass was born here and attended the Peabody, and his father owned a record store; rhythm and blues star Sisqo is from the city and his first group was formed here; the early doo-wop group, The Orioles, were Baltimore natives; indie rock duo Wye Oak hails from Baltimore; Gina Schock of The Go-Go’s was born here; Poulenc Trio of classical chamber music fame is from here; legendary rapper Tupac Shakur attended high school and art school here; and of course, there is the Baltimore Symphony Orchestra (BSO), founded in 1916, and, would you believe it, the BSO was originally established as a branch of the municipal government.

Turns out that within the city itself there are not too many musical instrument stores; more of them are in nearby suburbs such as Ellicott City, Catonsville, Towson, Glen Burnie and Timonium. Two of the Baltimore stores do stock a wide variety of musical instruments, but two others actually specialize in stringed things. All were interesting, and one shop offered a fascinating look at how instruments are repaired and maintained.

The first thing that caught my eye, as I entered the Brothers Music shop in the Old Goucher neighborhood, was a tribute album, “Baltimore Does Bowie,” with a cartoon rendering of the legendary musician in his “Ziggy Stardust” persona. That and a wall decorated with signs including a “NO Stairway to Heaven” poster, a refrain made popular in the movie “Wayne’s World.”

I could tell quickly that this is a quirky, small musical instrument store, stuffed to the gills with an impressive variety of instruments. Synthesizers, guitars, ukuleles, drums and percussion, and a lot of sheet music are just some of the things you can try and buy at Brothers.

The front of the store has spacious windows, so you can see everyone and everything going by on the street (and, if you are on the street, you can look up and admire the wares sold here). It was like walking into someone’s apartment and realizing they were hiding a big store inside.

The employee working the counter was very cool, inviting me to try some of the synthesizers and other keyboards displayed. She explained to me that they stocked reproductions of vintage Korg synthesizers and others, particularly because they are less expensive than the originals. “Go ahead, try them,” she encouraged me, and turned on the machines and amplifiers.

I really enjoyed playing the Korg Minilogue, and Brothers also stocked Arps and other Korgs. The woman working there also discussed the Bowie tribute album with me and asked if I wanted to try a drum machine.

I scoped out the rest of the store, which stocked a modest variety of acoustic and electric guitars and basses, ukes, drum sets and machines, various accessories, select brass instruments and percussion, and more. The store logo is nifty, and it is emblazoned on T-shirts and guitar picks. In fact, I purchased three guitar picks for a buck and the woman proudly handed me a store sticker, too.

I liked the low-key atmosphere here and the jumbled, yet organized, display. The store also had the feel of a hangout, and a customer who was there beside me was talking about guitars to the saleswoman.

Right across from the Peabody Institute, and close to the Walters Art Museum and the Washington Monument, is Ted’s, in the storied Mount Vernon neighborhood. It is a busy commercial street that has places to eat, as well. Ted’s is easy to spot, and it sports a few real neon signs, including a red one that reads “We Buy And Sell Harmonicas.”

As I walked in, I spied a large variety of instruments, many hanging from the walls and others displayed in counters. Ted’s runs the gamut from trumpets to drums, guitars to harmonicas. In fact, there were Snoopy harmonicas for sale. I debated buying one of those adorable harps, but I do have a few at home already. They also sell smiley-face, brightly colored ukuleles that come with drawstring bags in matching hues.

As I strolled slowly through this shop, which is a bit longer than Brothers Music, I saw a lot of drums, especially snares and the harnesses used for drummers in marching bands. There were also a handful of atypical stringed instruments hanging from the wall behind the counter (a beautiful deep-brown, acoustic bass; another strangely shaped bass; two see-through electric guitars and more).

When I entered Ted’s, I could tell it was a bit sleepy. A worker and a customer spoke quietly, looking over guitar accessories. And there were Latin-music percussion instruments for sale. I asked the worker if Peabody students came in all the time, and he said, “No, not too many,” which surprised me. “The marching bands come here,” he informed me, and he pointed out what they like to buy. “High-school kids, college kids, they like these things. We sell to them.”

I also told him that the store had a cute assortment of ukes, and he smiled. “Little kids like those. They’re good birthday gifts.” But then he went quiet, poring over paperwork.

I admired the clarinets, flutes, trombones and other woodwinds and brass, and checked out an old black-and-white Buddy Rich Zildjian poster, as well as other jazz and rock posters. I liked stopping by Ted’s Music, even though it was stuffy with no air conditioning on.

Unexpected surprises and friendliness: I encountered both at Perrin. I was more than a bit intimidated within a few steps inside this second-floor shop, but the worker who showed me around was so full of enthusiasm and good will that I truly enjoyed my visit here.

What can you buy or get repaired at Perrin? Violins, violas and cellos. Thus, this shop is not for everyone and has a niche appeal. But I appreciated the courtesy extended to me by the young man, a bow maker, who showed me the two showrooms with their neat rows and rows of beautiful stringed instruments. And it was fascinating to watch the few people on staff at their work tables, repairing and examining instruments. I admired their handiwork; a woman was attaching and adjusting a series of clamps to a violin and gave me a smile.

The young man explained to me that they do a lot of their work for members of the Baltimore Symphony Orchestra, and for students and staff of the Peabody. I asked if younger students do come here, and he said occasionally they do. But, I would recommend that serious younger, junior students do pop in and look carefully at the work and dedication of this firm. They are down to earth here, and it is a good learning experience.

Philtone is found in Greenmount West, a kind of transitional neighborhood. I had received the wrong address at first and had to drive against the early rush hour current heading downtown. When I arrived, I was a bit confused, and had to search for the door and bell.

Turns out Philtone is a small, crowded, one-man shop run by a person who is extremely dedicated to repairing and building guitars. He explained to me that “This is the home of wayward toys,” and spread out his arms to acknowledge the space. It was essentially a large workshop with a wide variety of electric and acoustic guitars. He told me about doing repair and maintenance work for the guitars of rock musicians and gospel guitarists. (Later, I looked up his credentials online, and they were impressive.)

But, he also explained to me, in a somewhat mournful tone, that “There is not much in the way of retail musical-instrument stores in Baltimore,” and he suggested that many more of the stores are in surrounding suburbs. I expressed my surprise at this assessment, and he shrugged his shoulders. “That’s how it is, but there are a few lively music scenes here, and musicians need repairs. That’s why I’m here.”

I was disappointed to see that Baltimore does not have more musical instrument stores and that those that exist are not too big. The chains, such as Guitar Center, are in nearby suburbs, but none in town.

For an all-around shopping experience with choices and a fun, creative atmosphere, Brothers Music is the best choice in the city. It may be a compact place, but it stocks a good amount of instruments with some interesting choices. A bus line runs right by the store, and parking is not hard to find. Hence, Brothers Music is this month’s winner.

Close behind is Ted’s, which also carries a good variety of instruments and accessories. Its location is somewhat more accessible for music students and tourists than Brothers, but the parking situation is tougher. Gotta hunt for those spots.

For an unusual, memorable, behind-the-scenes musical experience, do check out Perrin Violins. And if you happen to play the violin, viola or cello, this will be a must-visit at some point in your training and career. Probably more than once, if you are in the Mid-Atlantic.

I hope to return to Baltimore and visit Camden Yards. Tickets shouldn’t be hard to find, considering the Orioles’ 2018 record (just a little humor there).