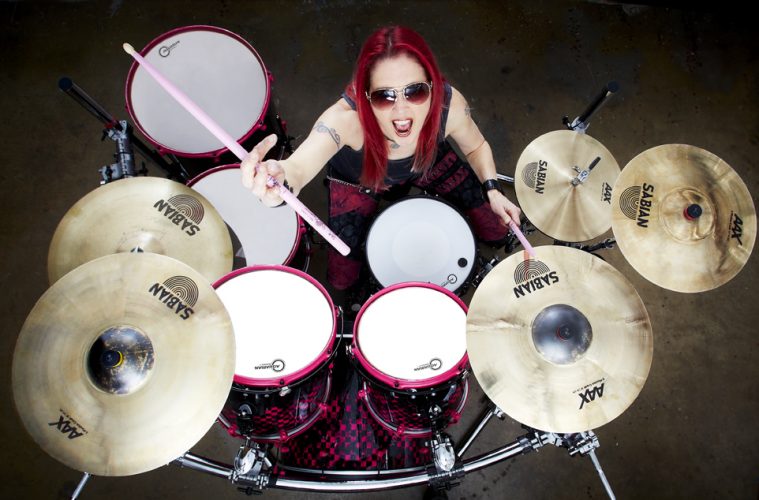 Editor’s Note: “Front and Center” is brought to you by the Women’s International Music Network (The WiMN). The interviews showcase accomplished women who work in the music and audio industries, spotlighting successful female performers, manufacturers, retailers, educators, managers, publicists and others. Visit thewimn.com to view the weekly interviews and to learn more about how to be featured.

Upon being diagnosed with an aggressive form of breast cancer in 2010, professional drummer April Samuels was immediately motivated to do something to help others in her situation. That year, she paired her will to fight breast cancer with her love of drumming and created the motto “Breast Cancer Can Stick It!” That motto can now be seen on shirts, water bottles, bags, bass drum heads and cars across the country, proudly displayed by people supporting her efforts to raise awareness and funds for research, clinical trials and a cure for breast cancer.

In 2011, Samuels assembled a team and they got to work organizing breast cancer awareness walks and music-related fundraisers. By 2013, Samuels had turned Breast Cancer Can Stick It! into a full nonprofit foundation to raise awareness and funds for a cure.

Women’s International Music Network: Thank you for joining us. How have you been feeling these days?

April Samuels: Thanks, I’m feeling great! I celebrated eight years cancer-free on November 10, 2018, and this past summer, I was released from my oncologist! While it’s exciting, it’s also scary to be back out into the world, not being monitored. But I’m thrilled to hit the eight-year milestone. At this point, my oncologist says I’m just as likely to get cancer now as someone who was never diagnosed.

The WiMN: Please share a little about your musical background.

Samuels: When I was five years old, my mom and I were hanging out in a music store, waiting for my brother to finish his guitar lesson. I ran across a pair of drumsticks and tugged on my mom’s leg, begging her to buy them for me. She finally did. I began beating on everything in sight at home. My parents put me in drum lessons and said if I kept up with it, at age 11 they’d buy me a drum set. Sure enough, age 11 rolled around and they bought me friends at our house, but it wasn’t until I was 19 that I really started playing out. Since then, I’ve gigged or recorded with nearly 50 different groups. Currently, I’m in three bands: Metal Shop Dallas, who I’ve been with since early 2012 — we play around 120 shows per year across Texas and Louisiana; The Breast Cancer Can Stick It! Band that I created in 2015, mostly for events for our nonprofit; and an original rock-pop-funk-jazzy project called 49th Vibration, started in 2006. We just released an album available through Amazon, Spotify and iTunes.

The WiMN: How did your foundation come to be, once you created your motto after your initial diagnosis?

Samuels: I came up with the slogan “Breast Cancer Can Stick It!” just a few weeks after my diagnosis in late 2010 out of a deep desire to help others facing the disease. The decision proved to be therapeutic. I was able to focus on something positive during a tough time. I was diagnosed, then had a double mastectomy just two weeks later, followed by four months of chemotherapy. Still, with all this going on, I was struck by the desire to combine my passion for drumming with my passion for fighting breast cancer to help others. The idea started off with just making shirts and selling them to raise funds for existing breast-cancer-fighting nonprofits. The shirts were selling so quickly I had to start ordering them in bulk. I also found other inventive ways to raise funds through gigs, contests, auctions, etc. Finally, my accountant said to me, “You’re raising so much, it would make more sense to form a nonprofit yourself.” And by May 2013, we were an official 501(c)(3) nonprofit. Since then, we’ve raised more than $200,000 in the fight against breast cancer, funding mammograms, financial assistance, and research and trials. We are 100-percent volunteer, and you’d be hard pressed to find another 100-percent volunteer nonprofit making this kind of impact. Our volunteers and donors are like no other.

The WiMN: How have you been able to combine your love of music and your musical background with events to help raise money and awareness?

Samuels: Year after year, we hold events all over Texas, but starting our annual Drummathon in 2015 was a game changer. A friend reached out to me with the idea, recalling a Drummathon event they held in the 1980s where a handful of 10 drummers or so would go door to door getting pledges in advance of their Drummathon event. The day of the event, normally held at a park, each drummer would solo as long as they could. Many times, they’d solo for over an hour straight! I wanted to take the idea and change it up so that drummers could raise funds online, then the top 35 fundraisers would earn a two-minute solo on a stage at the beautiful Klyde Warren Park in downtown Dallas. They’d perform in front of friends and family, as well as celebrity guest drummers we’d have. The event has already seen legendary drummers Carmine and Vinny Appice, drummers from Jason Aldean, P!NK, Joan Jett, Big & Rich, and more. The top fundraiser solos are interspersed with live bands, drumlines and more, in the midst family-friendly, festival-like events such as autograph sessions, raffles, auctions, vendor booths and food trucks. The first Breast Cancer Can Stick It! Drummathon in 2015 raised over $13,000, and [that number] has grown consistently each year. In 2018, we broke our goal of $50,000, by reaching more than $55,000.

The WiMN: How have you seen the MI community come together to support this important cause?

Samuels: We’ve had wonderful support from a number of companies. For example, each year for Drummathon, Sabian collects autographed items from their artists for our auctions. They also participate by donating their own products for our auctions, goodie bags and prizes. Aquarian Drumheads has been providing new drum heads for Drummathon since its inception. They too provide a lot of product for goodie bags, auctions and prizes, and they have been our volunteer booth sponsors as well. SKB Cases and Toca Percussion have both been Drummathon celebrity sponsors and have supplied products for goodie bags, the auction and prizes. Los Cabos Drumsticks supplies pink Drummathon drumsticks each year, as well as special offers for us to sell pink drumsticks year-round to raise funds. A number of additional MI companies offer products for our Drummathon goodie bags and prizes as well. Companies can visit drummathon.org to check out opportunities to get involved.

The WiMN: Where can our readers see you perform these days?

Samuels: I play primarily throughout Texas and Louisiana with Metal Shop, plus a handful of shows per year with The Breast Cancer Can Stick It! Band and 49th Vibration. My calendar is at aprilsamuels.com.

The WiMN: In closing, are there any upcoming foundation initiatives or new research you’d like to share?

Samuels: Each year at Breast Cancer Can Stick It!, we raise our contributions for our three main programs of research and trials, financial assistance for treatment and mammograms. The research and trials we support are making strides each year, both in immunotherapy and in honing in on genes that can lead to breast cancer. It’s exciting to see the progress year after year. The trials continue to show great promise, and we are honored to be a part of it.