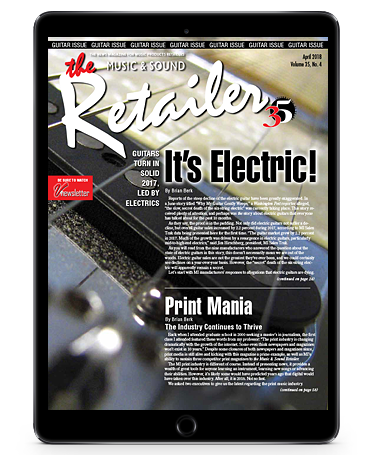 Last year, tons of headlines were made following a newspaper article alleging electric guitar sales are on the decline. We have the MI Sales Trak data and can tell you how guitars actually fared in 2017. We also have an industry update from nine manufacturers.

The music print industry continues to enjoy excellent success. We get the latest on the industry, including a look at its future, from Alfred Publishing and Hal Leonard.

Fender has entered the pedal market for the first time, with the products officially launched at a New York City event. We take a closer look at this new product launch.

Reverb is clearly one of the fastest-growing companies in our industry. We learn much more about the company’s approach from CEO David Kalt, who also discusses his keynote speech at the NAMM Young Professionals event earlier this year.

MI Spy heads to the Big Easy, The Crescent City, the home of jazz and more, New Orleans. Which of the four retailers he/she visited hit the right note this month?

Allen McBroom homes in on the counterfeit problem, and the best options to counteract this important issue.

This month, we head to the hip Live Music Capital of the World, Austin, Texas, to shine a light on Rock n Roll Rentals. Owner Jim Norton first knew he was doing something right 15 years ago, when Willie Nelson drove his bus into his parking lot.

Gibson has been in the news several times recently. Gabriel O’Brien shares his thoughts.

Will Mason follows up on his first column two months ago, providing plenty of tips on how to hire the right people at your store.

PRS had plenty of new products to get excited about at The NAMM Show this year. Its Mark Tremonti MT 15 amp was definitely one of those products.

What’s the greatest advice Gil Soucy, vice president and general manager of U.S. Music Corp., has learned? “If you can’t be replaced, you can’t be promoted,” is one pearl of wisdom. He also received another excellent piece of advice, plus much more.