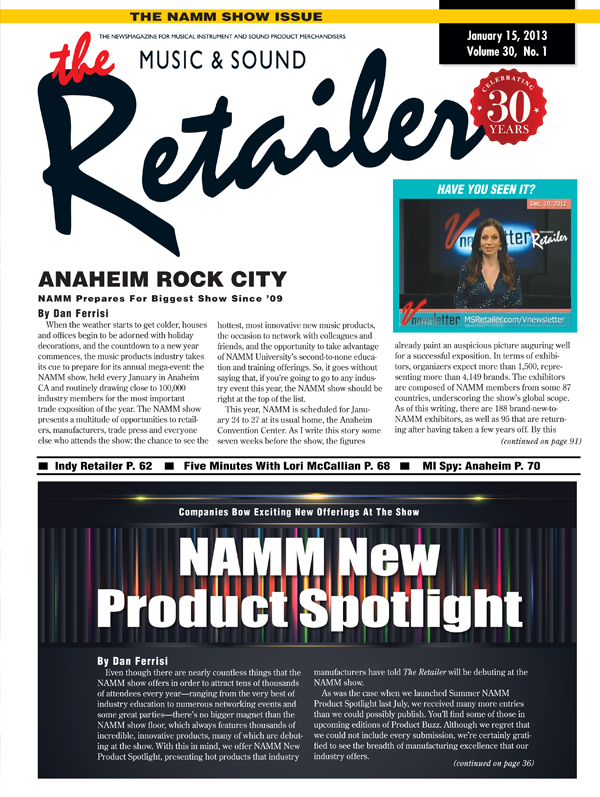 NAMM Prepares For Biggest Show Since ’09

When the weather starts to get colder, houses and offices begin to be adorned with holiday decorations, and the countdown to a new year commences, the music products industry takes its cue to prepare for its annual mega-event: the NAMM show, held every January in Anaheim CA and routinely drawing close to 100,000 industry members for the most important trade exposition of the year. The NAMM show presents a multitude of opportunities to retailers, manufacturers, trade press and everyone else who attends the show: the chance to see the hottest, most innovative new music products, the occasion to network with colleagues and friends, and the opportunity to take advantage of NAMM University’s second-to-none education and training offerings. So, it goes without saying that, if you’re going to go to any industry event this year, the NAMM show should be right at the top of the list.

This year, NAMM is scheduled for January 24 to 27 at its usual home, the Anaheim Convention Center. As I write this story some seven weeks before the show, the figures already paint an auspicious picture auguring well for a successful exposition. In terms of exhibitors, organizers expect more than 1,500, representing more than 4,149 brands. The exhibitors are composed of NAMM members from some 87 countries, underscoring the show’s global scope. As of this writing, there are 188 brand-new-to-NAMM exhibitors, as well as 95 that are returning after having taken a few years off. By this month, organizers forecast new brands to increase to 200, with perhaps 100 brands returning.

Having myself attended the Music China show in Shanghai this past October, I asked Joe Lamond, NAMM’s President/CEO, whether increased attendance in Anaheim is at least partially attributable to a continued influx of international companies.

“The NAMM show has truly become the global gathering of the industry,” Lamond said. “However, I believe that the mix of countries represented on the show floor has stabilized over the past couple of years.”

He continued, “What we are seeing, though, are more entrepreneurial companies from around the world that make specialized, handcrafted music products, such as exclusive, limited-run guitars, hand-wired amps, all kinds of effect pedals and other special edition instruments that have a story behind them. On the retail floor, these products appeal to a musician’s need to have something different and unique from the next guy, and something to brag to his friends about!”

In a sign of the clear potential this year’s show holds, figures indicate that 2013 will boast the NAMM show’s highest industry participation since 2009. And, in terms of show-floor square footage, this will also be the largest NAMM since ’09, the halls and meeting rooms full of thousands of new music products. It’s no wonder, given everything that will be on offer, that tens of thousands of registrants eagerly await the show. Last year, the show drew just over 95,000 registrants and, as of now, NAMM 2013 is on track to hit that number. Registrants represent a hugely diverse cross-section of the industry, comprising NAMM members, retail buyers, retail employees, major pro sound and lighting buyers, media, educators, employees working exhibitors’ booths, the next generation of music industry professionals, non-profit NAMM partner groups, artists and celebrities.

As always, the NAMM show floor will present a comprehensive look at our market, featuring all the music products that populate your stores and musicians’ play spaces. However, there’s also been some evolution over time, as the show has changed with the industry it mirrors. Lamond singled out pro sound and lighting exhibitors, saying, “Some of our stability through the recession has come from recognizing and attracting these growth categories.” He also referenced apps and gaming, which now have their own pavilion in Hall E. “That’s an area of real interest, because it’s expanding so quickly,” he said. “Sometimes, it’s a surprise to many of our members how quickly musicians are seizing opportunities to use apps for making music, recording music and sharing music.” He added that NAMM members should be on top of that trend, analyzing how they can make it work for them.

Apart from product evolution, the 2013 NAMM show will have other changes that, it is hoped, will further improve the experience. In an effort to make attending NAMM more hassle-free and to open up more space in the convention center, registration will move out of the lobby and into surrounding hotels. Now, people attending NAMM can check in, pick up their badge and then head straight into the show. According to Lamond, “Registration and ID checks will only be done once…at that outside wall. That opens up the whole lobby for use, and it also means we can open up all those doors to Halls A through D. So, it really becomes one big, open area for all our members to move around in.”

Another virtue of the “open” plan is that it will make it even easier for retailers to meet with exhibitors in the meeting rooms on the second and third floors, which include venerable names like Peavey, Roland, PRS, Schecter, Gibson and Fender, among others. The open lobby will host an exclusive Member Center, digital media hub, new product showcases and, I would guess, quite a bit of music.

We’ve already referenced the increasing importance of pro sound and lighting to the NAMM community, and another new development seems perfectly suited to capitalize on it. The very best in lighting, touring and sound solutions will take center stage inside The Venue––the NAMM show’s newest hot spot––bringing the concert experience to life. It will be located adjacent to Hall A in the Arena inside the convention center. Exhibitors can build their brand, connect with a global audience and put their products in the spotlight at The Venue, which has fewer restrictions than the main halls, thus allowing brands to put their products in the best light possible by taking advantage of dimmed lighting and special sight and height constraints.

And as if all that were not enough, the $20 million Grand Plaza, which will run up to the convention center between the Hilton and Marriott, will be complete by January. For the NAMM show, a professional outdoor stage will be built that will feature dozens of live acts throughout the day and evening. On the opening night, Tower of Power will play their classic funk hits. It opens up 100,000 square feet of comfortable, accessible space in which the industry can gather.

Moving on to show activities, the NAMM show will kick off with “Breakfast of Champions,” a perennial favorite and the first of several Breakfast Sessions that promise a hot meal and plenty of business intelligence. This year, Joe Lamond will host a discussion with industry VIPs about the importance of leadership. Other Breakfast Sessions include “The End of ‘Business as Usual’—How to Rewire for Success” with Brian Solis, a discussion about how to reach the new generation of techno consumer; “Get Unstuck: Boost Your Sales” with Barry Moltz, which will explore breaking ineffective patterns in business; and “Best in Show,” a round-up of the best products and services at NAMM, moderated by Frank Alkyer.

Let’s continue in the vein of networking and education. “We’re hearing from so many of our retail buyers that the education opportunities offered by NAMM are almost becoming of equal importance in their decision to come to the show,” Lamond remarked. “Members who take the opportunity to use NAMM University at the show are definitely going to be better equipped to succeed.” We have a detailed NAMM U schedule for your reference beginning on page 54, so we’ll just give a brief overview of some highlights. For the first time, Retail Boot Camp will be held at the NAMM show. Hosted in partnership with iMSO (the Independent Music Store Owners), this all-day event gives dealers a crash course on retail basics the day before they hit the show floor. Retail Boot Camp will include intense sales, marketing, staff development and inventory management training that will help attendees make critical changes to their stores immediately. The information is designed to inspire and energize independent dealers of all sizes and any longevity.

At The Idea Center, attendees can expect a roster of helpful, hard-hitting sessions, such as “How Spending $250 Can Triple Your Sales and Turn Old Inventory” with Raegan Medeiros; “12 Cheap Ways to Better Your Business NOW” with Leslie Faltin; and “How to Turn an In-Store Event Into Profits” with Brian Reardon. Likewise, audio, recording and lighting professionals will be treated to The H.O.T. Zone for the fourth year in a row. There, they can catch sessions such as “Engineering and Producing Forum” and “Band Inc.—Running Your Band as a Brand.” You’re not going to want to miss these!

For as long as I’ve been Editor of The Retailer, I have described the NAMM show as a barometer of the music products industry: a way to gauge its relative health and to forecast the outlook for the year ahead. But it’s also a moment for all of our collective efforts to be united…kind of like everybody simultaneously beating the same rhythm on a drum.

“Whenever there’s a show like this, and people come from all over the world, you can’t help but to be optimistic,” said Lamond. “That the music industry, and everything we believe in, is going to be just fine.” He continued, “You get all of us together and you realize, ‘Hey, we can do this.’”

To close, Lamond analyzed the state of things, making a compelling case for why attendance at the NAMM show is critical—this year, and every year.

“We hear from many members that they are doing better now than the year before, which is very good news; and they seem optimistic for the year ahead, too,” he noted.

“But if the wild ride of the past few years is any indication, getting a competitive edge is going to be critical to future success.”

“So,” he explained, “I can’t imagine why anyone wouldn’t be at the NAMM show. It’s the one place where someone can see—with his or her own eyes—the state of the industry at this moment. Everything else you read or watch is filtered through somebody else’s view of it. But, for each person in the industry to go to the NAMM show and see things with their own eyes…how could that NOT help you make better decisions?”