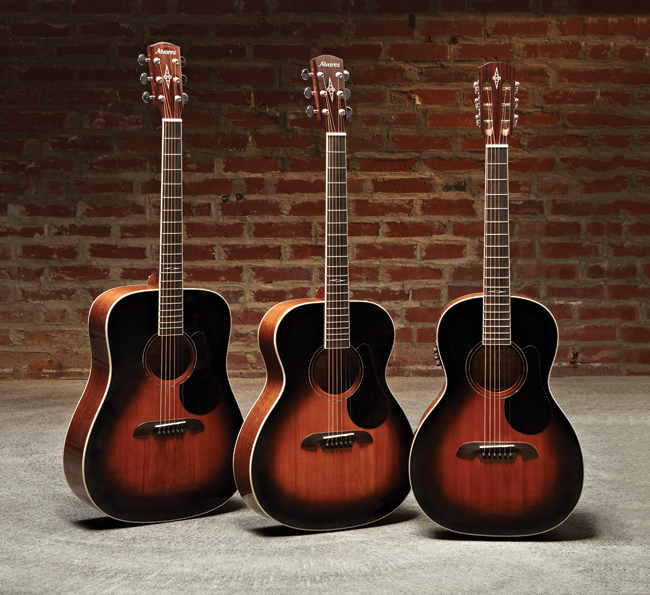 The Music & Sound Retailer always strives to keep its finger on the pulse of music products industry trends, and one of the most undeniable trends of recent years has been a surge in the popularity—and sales—of acoustic guitars. Dealers to whom The Retailer has spoken over the last couple of years have been virtually unanimous that, perhaps owing to the popularity of artists like Taylor Swift, players have largely shifted their attention from electric guitars to acoustics. Alvarez, founded in 1965 and distributed by St. Louis Music, is among our industry’s most prominent acoustic guitar manufacturers. Here, we’ll do a deep dive into the Alvarez Artist Series, a line whose success is undeniable.

The Artist Series has been a major part of the Alvarez line for decades, but, according to Chris Meikle, Senior VP at St. Louis Music, the company decided in 2011 to completely re-vamp and redesign it. Following an 18-month process, the first models began shipping in early 2012. “The premise was to create a comprehensive offering of premium solid top acoustic guitars with a wide range of shapes and wood configurations,” Meikle said. He continued, “The other guiding factor throughout development was to create the best-sounding and -playing instruments at the price point: to build guitars that responded correctly, were balanced and were fun to play. We wanted to get that high-end, handmade type of vibe in an acoustic instrument that was accessible to as many players as possible.”

Since the new Artist Series’ launch, it has grown to become the biggest-selling series within the Alvarez product range, not only in the United States but also throughout the world; the Artist Series’ current distribution is nearly 40 countries. The line has also grown to offer a guitar for every player. From standard shapes, such as dreadnought and folk, to parlor, grand auditorium, jumbo, and even baritone and bass, the Artist Series covers it all. “Last year,” Meikle began, “we added to the series Artist 66s, which are all-mahogany guitars finished in a vintage sunburst.” He continued, “We have also launched other new models like our ARD70, a slope-shouldered dreadnought with slotted headstock and 12th fret body joint.”

Continuing the discussion of particular offerings under the Artist Series banner, Meikle turned to Artist Series 60s, whose construction incorporates an A+ solid Sitka top, mahogany back and sides, and a hand-finished, forward-shifted, scalloped bracing system …