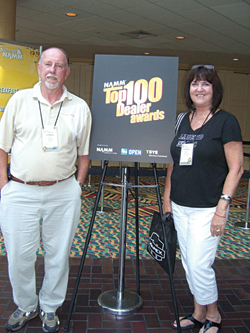 It had been 47 years since Doug John first started working at Delta Rubber Co. at the young age of 13, and he and his partner had decided it was time to sell the company. He was not yet at retirement age, and he’s the first to admit he “can’t sit at home” and “doesn’t play golf.” So what could John do next? Open a music store, of course!

Music had become a late-in-life love for John, who first learned to play guitar when he was 55 years old. “It happened at a friend’s barbeque where some people were playing in my friend’s studio and, after a few drinks, they convinced me to learn how to play, too,” said John. “So, the next day, I went out and bought a guitar.” A year-and-a-half later, John was playing in bands and taking lessons from Jeremy Brown, who had been recently laid off from an MI store at the time John sold his business. “So, we decided to put a business plan together and opened up our first store,” John recalled.

“I negotiated for free lessons for life as part of the deal, but I haven’t had a single lesson since,” he continued with a laugh. “Actually, I learn more now from sitting and playing with my customers. That’s part of the fun of this business. They are my teachers now.”

The warmth and camaraderie of the music business is very different from the more corporate environment in which John worked for most of his career. But, thanks to his strong business background and keen interest in his competition, John was quickly able to learn just what his customers needed to keep them coming back.

“I did my homework to see how other stores treated their customers,” said John, who works not only with Brown but also with his wife, Francie Denis, who handles administrative duties as well as the store’s Web site and newsletter. “When I go to a competitor and I watch people, it’s not rare to see them sitting behind the counter. Sometimes, they’ll say hello and sometimes they won’t.

“Image and reputation is everything,” he continued. “I tell my staff they have to be on the floor and be proactive with the customers. I don’t want them to go 30 seconds without being acknowledged.”

That’s not to say John’s staff is pushy, however. Legend Music is designed to be inviting, with couches and plenty of other places for customers to sit, relax and shop. “Our customers need to have a good experience; they need to be priced well and get taken care of in a timely fashion,” John explained. “We keep the place clean and change the merchandise every two to three months so that it looks different. We let people look all they want, and we let them play the instruments all they want because that’s how you know if you like it.”