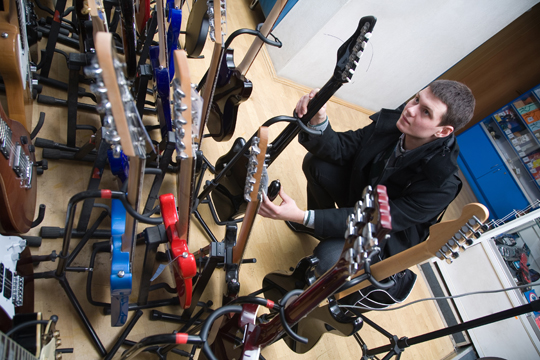 Retailers Reflect On Triumphs, Challenges And The Future

In an industry as varied and as far-reaching as MI is, it’s difficult to get a true sense of the state of the industry across all geographic regions, product categories and other variables. To get a sense of where MI retailers stand at the close of 2012, The Music & Sound Retailer spoke with three respected retailers across the country. Although each store’s experience is very much distinct, they have all needed to get creative to capture the attention of an unsure consumer population.

Gordy Wilcher’s store sits in an area hard-hit by the economic tribulation of the past few years, with much of the local industry “struggling and considering cutbacks and layoffs.” So, it comes as no surprise to Wilcher that store sales are slightly below where they were in 2011. “Business is down less than two percent. Considering the economy, high gas prices, high food prices and a presidential election year, it’s about what I expected,” said Wilcher, who added that the economy has also affected budgets for houses of worship, thus affecting his store’s installation business.

The less-than-rosy economic picture has not stopped Wilcher from investing in some of the areas that will help his store to be as profitable as possible, including customer service. This year, Wilcher hired a new, young salesperson to join his team and, as a result, “We have noticed an increase in a younger demographic this year,” he said, “especially the 15- to 30-year-olds.”

“I am extremely excited that we have an energetic, enthusiastic self-starter on the staff,” Wilcher continued. “Our staff has become very grey. This is our 40th year in business and, [before this,] the newest staff member had been here 15 years.”

Bringing younger customers into the store is especially important this year, as Wilcher has noticed that foot traffic is generally down at Owensboro Music Center. “Lately, the good news is the buyers who come in seem ready to buy,” said Wilcher, who noted that some of his bestselling products are acoustic guitars in the $149.99 to $399 range, as well as bluegrass instruments like banjos, mandolins and fiddles.

One place Wilcher has made up some of the difference in lost sales is in repairs. “Comments seem to confirm that many are uncertain of the economy and are holding off purchasing new items,” said Wilcher. “[As a result,] the biggest increase in activity is repair. Many customers are choosing to have instruments and sound gear repaired.”

However, Wilcher has noticed that when customers do come in ready to buy, they expect to do so at a discount.

“The recession has very much created a ‘bargain-shopper’ customer,” said Wilcher. “I have retired all the ‘special sale events’ from the past. Let’s face it; it’s all on sale every day and just a mouse click away.”
Wilcher continued, “I think it’s more important to hold clinics, in-store workshops and, perhaps, some open mic showcases. We have to have an alternative to just a price to get bodies in our store.” To that end, the store is implementing marketing ideas learned at The Retail Boot Camp offered to great enthusiasm at Summer NAMM.

Lori Supinie, President of Senseney Music, Wichita KS
For Lori Supinie, the foot traffic at Senseney Music “feels off somewhat.” She commented, “We were very busy during the times we’re supposed to be, such as back to school, but then it seems to become thin.”

As a result, Supinie has developed a steady stream of what she refers to as “mini events” to draw people into the shop. “People need a reason to come here,” she said. “We can lure them in with a special offer, entertainment, a scratch-and-dent sale or some other event. Plus, we serve as a host to local teachers and music groups to hold their functions here. We feel that, if we can get them into the store, they’ll buy something.”

Supinie has found success with promotions like her re-string event, which the store held last summer in tandem with a sidewalk sale. “Since it was well over 100 degrees that day; we actually held it indoors,” she recalled. “It was very successful. Our sales were about triple what they were on a typical Saturday in June.”

It is important, of course, to remember that any increase in sales could easily be overtaken by a large outlay in advertising and marketing costs to publicize the event. Supinie is very aware of this, especially when the biggest sellers in her store are in low-end price points, with moderate activity in mid-range products. Referring to last summer’s re-string event, Supinie noted, “I spent $150 on a banner, and the rest of the advertising was done via Facebook and e-mail.”
In order to keep her customers informed without inundating them with information that’s irrelevant to their needs, Supinie makes sure that each department in her store has its own e-mail list.

“We don’t typically send a one-size-fits-all e-mail blast. All of our departments create an e-mail with their customers in mind: what’s new, what’s coming up in the store and, for educators, what can help,” she said. “We don’t send them out too often, and we don’t make it all about product.”

Her approach seems to be working, since Supinie reports impressive open rates of about 25 to 30 percent. It also helps that, although families are remaining cautious with their spending, they still support the idea of playing music. “For the most part, parents still want their children involved in music. Our lesson programs and beginning instrument rentals are very strong,” said Supinie. “But recovery has been slow and folks are pretty cautious with spending. I’m glad we are a full-line store and don’t have all our eggs in one basket, so to speak. But it is challenging.”

“I don’t think the industry by and large has seen the kind of growth we have,” said Dods. “I get the sales reports, and we seem to be ahead of the curve. Last year was a great year, so we decided to get aggressive and open up a new store,” bringing Easy Music Center’s total to three locations, Dods continued.

Because traffic patterns on the island of Oahu were becoming ever more fragmented, “folks were starting to order online or just not buy at all,” Dods explained. By opening the new store, he was able to bring some of those people back into the MI fold. “Our new satellite store was greatly received, and we sell a heck of a lot of accessories out of it. Our inventory on hand has shot up about 30 percent to accommodate three stores.”

Dods has noticed activity pick up in the higher-end price points this year, so much so that he has begun stocking pricier items like Martin guitars. “We never sold $3,000 and up acoustics before, because we never had anything customers wanted to buy in that price range. Every time we bought price points like that with other acoustic lines, they would sit and, more often than not, we would have to clear them at below cost a few years later,” said Dods. “We think some of these customers always did—and still do—have money for these things, but they’d been nervous with what was going on in the economy. They seem less nervous now, and they also seem like they are tired of holding out so long on personal ‘dream’ purchases.”

One of the biggest trends Dods has seen in recent years is actually not in traditional instruments like guitars. He finds that more young consumers than ever are gravitating toward laptops and other electronic forms of music making. Coming from a similar background, Dods is eager to cater to this type of customer, having found it to be a key element of his success.

“If you aren’t catering to this new breed of customer, you’re missing the boat,” said Dods. “If you disrespect them, don’t carry what they are interested in and don’t have someone who can talk shop with them, then they will shop online. They are quick to come and go if they don’t think you have what they need or if you are condescending because you think they aren’t real musicians.”

To cater to this customer, Dods offered his stage for free to a concept called BeatRoot. “BeatRoot was holding the prelims at nightclubs. The cost of the event for the qualifying rounds was high, and the contest was looking for other ways to do the prelims without constantly losing money by using nightclubs as venues. It was a struggling project that we helped saved from extinction,” said Dods, who holds the event in his store six times per year, and also helps them out with sound reinforcement at the finals, which they hold at a local nightclub, “where our banner flies high,” he added. “It helps this community see that we aren’t some lame corporate store that only caters to guys in a band. Of course, at the heart of our business, we still cater to helping the guys in the band, but we’ve welcomed customers like this, as well.”