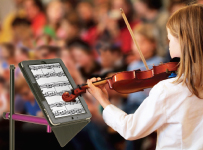 In the brief time since its creation, Under The Hood has profiled everything from a wireless guitar controller to a speaker and sub series to a touchstrip DJ controller. Well, as the Monty Python troupe might say, “And now for something completely different.” This month, we spotlight the On-Stage u-mount Mounting System, a series of products that gives musicians and others an easy, safe way to incorporate their tablet computers into their performances and work. The Retailer spoke to Jim Hennessey, President, The Music People! to learn more about this product innovation, which made a huge splash at this past Winter NAMM show, earning a Best Accessory or Add-On nod in the Best in Show awards.

The heart of the u-mount system is a protective case that looks and functions like the standard professional folio case you see everywhere. “But,” began Hennessey, “ours features a sturdy, low-profile metal insert that attaches to a selection of mounting arms and tripod stands. The mounting arms themselves are an innovation. They are clean, sleek aluminum devices with a simple new Elliptical Enveloping System that clamps onto tubular and flat surfaces.”

The u-mount has been described as the first comprehensive tablet case and mounting system designed for musicians, and that description is apt. First, right out of the box, the mounting arms clamp directly to existing mic stands, drum hardware and instrument stands…all the gear musicians already have. There’s no need for modification, and no need for an additional stand to carry around and set up. The same stand that a guitar player uses for his or her vocal mic can be used with the u-mount. And, second, because the u-mount case functions as a standard case when the user isn’t gigging, there is no need to ever remove the iPad. When it’s time for a gig, attach the case, iPad and all, directly to the mounting arm and it’s ready to go.

Hennessey completed the trio of reasons this product suits musicians so well, saying, “With a swiveling ball joint at the point of attachment between the case and mounting arms, plus the adjustability of the arms themselves, the u-mount system can be positioned to suit the specific needs of musicians, whether standing or sitting, or finding just the right spot between cymbals and rack toms. What’s more, because of the modular design of the mounting arms, we’ve seen guys use the smaller removable arm as an ergonomic handle when mixing remotely, or as a monopod for desktop use. The system suits itself to just about any purpose.” And, he added, “Incidentally, by having the versatility musicians need, it means the u-mount is well suited for countless mounting scenarios off-stage, as well.”

Something unique to the u-mount’s design is that the case and the mount are one and the same. There are, of course, other iPad mounts out there; however, they require users to “play musical chairs,” removing the tablet from its day-to-day cover/case, placing it into a specialized mount and then reversing the process after use. By contrast, Hennessey explained, “There is no specific need to ever remove the iPad from the u-mount case; all of its ports, cameras and switches are accessible at all times, whether mounted or not.” He added, “It couldn’t be easier.” Also notable, in terms of flexibility and ease of use, is that the u-mount fits all three generations of iPad. The difference in thickness between the original iPad and subsequent versions has been addressed with an included insert.

The mounting arm included with the u-mount system features a ball joint at the point where the case couples with the arm. This offers 180 degrees of tilt and unrestricted rotational adjustment. Another optional ball joint accessory is also available, threaded to work with either of two u-mount series tripods or any standard mic stand. This optional ball joint offers the same 180 degrees of tilt and unrestricted rotation as found on the mounting arms.

Not only has the u-mount system drawn praise, but its packaging has earned many compliments, as well. According to Hennessey, “We always take pride in our packaging, and u-mount is no exception.” The u-mount box features a book-style lid that opens, laying out product features and applications. “We find,” Hennessey continued, “and our dealers have noticed, that the design engages consumers and really speaks to the quality and versatility of the product itself. iPads exuded a slick sophistication, so we worked to reflect that in the packaging for our u-mount system.”

The Retailer asked Hennessey what helped the product win its Best in Show honor at NAMM, to which he replied, “u-mount was singled out for being a product of particularly mass appeal. Tablet computers in general, and iPads specifically, have found diverse uses in the music industry. There are so many apps musicians use for recording, cueing, FX processing, modeling, synthesizing…u-mount is a hands-free solution poised to meet the current need and, because of its simplicity and versatility, to expand it further. u-mount is a true winner for our dealers.” Another thing that drew many comments at NAMM was the fact that the u-mount case featured a cover. Dealers saw iPad mounts at other booths, but only the u-mount had a cover. “It’s just as functional in the boardroom as on stage,” Hennessey