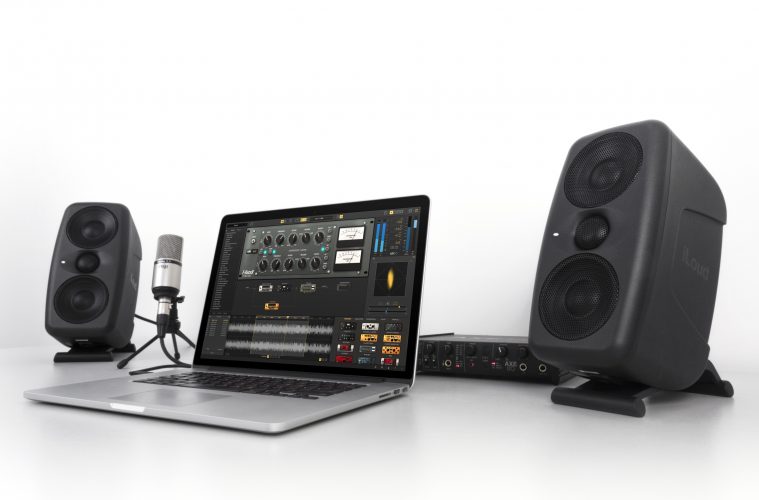 IK Multimedia’s iLoud MTM is a compact reference monitor designed to be used by engineers and producers for nearfield monitoring while mixing tracks in a project studio, as a space-saving desktop monitor in home studios or as a secondary monitor for commercial studios. It builds upon its predecessor, IK’s iLoud Micro Monitor, which, when it was originally launched, produced loud, crisp, clear sound to a degree that was unexpected for a monitor at that size and price point, stated the company. iLoud MTM takes things to the next level by using a combination of design elements and technology advances intended to deliver pristine sound and unprecedented accuracy for its size and price point. The result is a monitor that offers balanced, uncolored, true-to-life sound that minimizes ear fatigue even when used for hours at a time, IK noted.

“iLoud MTM was inspired by the success of our award-winning iLoud Micro Monitors,” Dan Boatman, IK Multimedia’s U.S. sales and marketing director, told the Music & Sound Retailer. “With the iLoud range of compact nearfield monitors, we’re very focused on addressing the realworld issues musicians can encounter, whether it’s working in untreated or makeshift studios, on the go or in a budget-conscious desktop setup. We didn’t see other manufacturers designing for these users specifically, despite them being the largest share of the monitor market.

“After the honestly incredible response to iLoud Micro Monitors, we felt there was an opportunity to show what our speaker design and DSP team could do with a slightly larger volume,” he added. “Whereas iLoud Micro Monitors were aimed at the three-inch to five-inch speaker market, iLoud MTM aims to deliver performance as good or better than a six-inch or even eight-inch monitor, but with half the size for working in smaller spaces; again primarily for use in home, project or mobile studios.

“Everything in the design process was focused on ensuring the absolute best-in-class performance for that usage,” Boatman continued. “From the MTM (midwoofer-tweeter-midwoofer) speaker arrangement, to the onboard auto-calibration, even down to the range of degrees the included tilt stands allow for, every decision was guided by the question, ‘What issues will arise in the real world, and how do we minimize them through this product?’”

“I think the first thing people notice is the bass extension, which at 40 hertz is much lower than you’d expect from a monitor of this size. But overall, it’s the clarity and quality of the sound. iLoud MTMs offer amazing clarity, including linear phase sound, which is normally something you find on monitors [priced] above $1,000. And the stereo imaging is incredible. We’ve had a lot of positive feedback from users who love working and listening to these, not only because of the quality of the sound, overall, but because they can listen for hours on end without ear fatigue,” said Boatman. “Aside from the sound quality, people love the built-in auto-calibration feature: a reference mic is included for the calibration process, and in just a few seconds you’re able to adjust the monitors to fit the room you’re working in. It lets you mix more confidently, without worrying your mix will fall apart when you take it elsewhere.

“But there are a lot of smaller touches, too,” he added. “For example, the included stands feature a wider range of adjustable angles, so you can point them properly at your ears even at very close distances, allowing you to work from the sweet spot, even on a laptop. Also, you can adjust the low-end cutoff, in case you don’t have the room or budget for multiple systems. We put a lot of thought into creating monitors that can make your workflow easier and your life more convenient, and I think users really appreciate that.”

Designing the product took a lot of thought — two years’ worth, in fact. “There were the initial discussions, outlining the design goals for the product and making the initial decisions like using the ‘MTM’ speaker arrangement. After that, there were many rounds of prototyping, tuning the overall cabinet, and auditioning different speaker materials until we got the interaction between the cabinet and speakers dialed in,” relayed Boatman. “In addition to the analog design side, our DSP team developed the digital crossovers and tuned the performance-management system, which is pretty unique. They actually digitally constructed a physical model of the speaker itself, so the onboard DSP can anticipate and maximize the performance of the system in real time. So, we had two separate teams working in sync on the analog and digital sides throughout the entire process. And of course, all that had to be periodically checked and rechecked against the real production units from the factory, to account for any variations from the prototypes. Finally, starting at The 2019 NAMM Show, we presented units to a group of VIP engineers, to get their feedback and make final adjustments, and that process lasted another couple months. Our colleague, famed engineer Tom Lord-Alge, still has the last evaluation pair we sent him in his studio, and he said he uses them so much he won’t ever give them back.”

But even if a company has a great product, they need to produce it in an industry where there’s growth and customer demand. Boatman believes the recorded music industry is just the place. “We’re absolutely seeing [industry] growth, both as a company and as an industry.Part of that is our position in   market,” he said. “IK is very much focused on expanding access to music-making, whether that’s on a mobile device, a home studio or building an Instagram following, so we meet and speak with a lot of musicians who might not be ‘in the business’ the way a band on a label is. And they’re doing very well, which helps to expand the market overall.

“In terms of what musicians are looking for, I think that’s changed over time,” Boatman continued. “The recording market feels more crowded now, I think because of the easy access to Chinese manufacturing. It’s easy for a brand to bring a generic product to market, and since they’re all functionally very similar, musicians have started to really expect more. They’re looking for the products that make their lives easier, that offer them something new or unique and that show a manufacturer is listening to them. The iLoud series is a great example. We designed a product that delivers premiere sound quality and a lot of features you’d normally find on very high-end speakers, and it’s been a massive success. Similar-sized products in the past that seem to be focused purely on reducing price had not been nearly as successful, despite coming from more established brands. So, with all our products, we’re really focusing on offering solutions that make life easier, or offer something unique, instead of competing on price.

“Similarly, I think musicians’ workflows have changed,” Boatman noted. “They don’t sit down and record an album, and then go tour the album. Today, musicians are releasing songs one at a time on Spotify, or running a YouTube channel, or building an Instagram following. They prioritize constant, daily and much less formal interaction with listeners. They’re recording on the road or shooting promos from the studio.

“A good example of how we’ve reacted to that is our Creator Series, which are all low-cost accessories designed for folks who share and stream music on social media. Again, that’s because of the way the business works now. If you’re in the studio, you share a quick Instagram snippet of your project to build hype, then release it on Spotify in a couple weeks. If you’re at band rehearsal, you stream it to build anticipation for your shows. And users appreciate that we’re creating solutions with their workflow in mind,” Boatman added.

Thus far, end-user reaction to the iLoud MTM has been enthusiastic. “Being new to the market, our primary focus has been on educating customers about our unique advantages and value. We’re lucky to have a massive and enthusiastic user base from iLoud Micro Monitor, so sharing their excitement has been key, too. In particular, social media has been a great way to present this to new users and see the reaction from other users like them, and we’ve invested a lot in organic content there, in addition to paid ads,” Boatman concluded. “That’s built up a lot of interest and curiosity about the line, so the other focus for us has been giving people a chance to listen to the monitors. We’ve made demo units available to as many dealers as possible, and we highlight those locations heavily on our site. It’s a great combination when you have enthusiastic testimonials and easy access to listening stations, so we plan to continue this in the future.”

To read more “Under the Hood” features, click here.