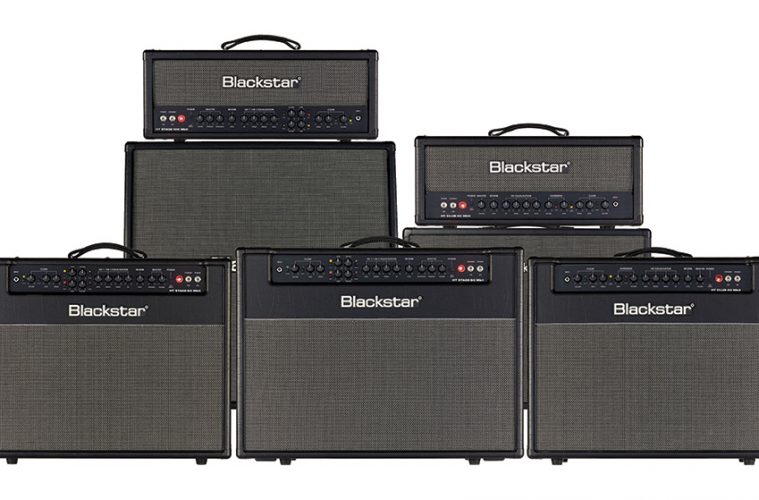 Blackstar Amplification is currently celebrating its 10-year anniversary. As part of that celebration, the UK-based company has released a revamped line of its VENUE Series amplifiers. The new line of tube amplifiers, HT VENUE MkII, incorporates a host of new guitarist-friendly features while retaining the functionality that made the original VENUE Series a major hit.

“Basically, the VENUE MkII range is what the name suggests: a natural evolution of the highly successful first VENUE range — the next generation, the second coming,” said Paul Stevens, design engineer at Blackstar. “The new range will be recognizable to people already familiar with the previous range; however, the MkII versions have been completely redesigned with many upgrades, improvements and additional features, as well as a cosmetic redesign. The idea was to build on the success of the first range by further refining what we already had, satisfying some customer requests and adding features useful to the modern player.”

The original VENUE Series owed much of its success to its all-valve design, which the VENUE MkII Series retains. This throwback, analog design will resonate with traditional tube-amp aficionados, and it offers an alternative to the digital amps that dominate the market today. “Having a valve preamp and valve power amp means that the fundamental tone-generating parts of the signal chain are using the same type of technology as the classic valve amps of the past,” explained Stevens. “This is apparent not just in the sound but, due to the interaction of the valve power amp with the speaker, in the ‘feel,’ as well. Playing a valve amp for the first time often results in the user thinking, ‘Ah, that’s what all the fuss is about.’ And experienced players will also find the recognizable tone and feel pleasing and inspiring.”

However, the VENUE MkII models offer more than just a traditional tube-amp sound — they represent a new direction for Blackstar’s valve-based amps. “These are fundamentally valve amps that retain a pure analog signal path from input to speaker, like a traditional valve amp, but they also incorporate other features more normally associated with modeling amps, such as digital reverbs, speaker emulation, USB connectivity and sophisticated channel switching,” said Stevens.

In fact, the HT VENUE MkII’s USB connectivity could be a major selling point for those interested in home recording. “The reamping and USB connectivity is quite sophisticated,” explained Stevens. “Used simply, it allows the user to connect via USB to their computer/DAW and record the amp with speaker cabinet emulation applied, and, therefore, to get a great recorded guitar tone without the need to connect to a speaker cabinet, add a microphone or play too loud.” Stevens continued, “In addition, another channel on the USB can be used to record a completely dry and buffered version of the guitar part into the computer. Then, by merely switching the rear switch to Reamp mode, this pre-recorded clean signal can be reinserted into the amp via USB, and then the controls of the amp can be used to process the guitar sound as normal. This is becoming more and more popular at the mixing stage of a recording. Incidentally, the speaker-emulated sound can also be taken from both the balanced XLR and stereo headphone/line outputs, as well.”

The series also offers power-reduction capabilities. “The power reduction switches the output stage from full-rated power down to 10-percent power,” said Stevens. “The 100-watt model switches down to 10 watts, the 60-watt switches to 6 watts, and so on. This allows the user to push the valve power stage even harder into power amp overdrive, without having to resort to high volume levels. This produces the unique tone and feel that is associated with a valve amp that’s been pushed hard.”

Two-way and five-way footswitch controls round out the HT VENUE MkII’s list of features. “The two-way footswitch will switch between the two voices on the clean channel, as well as two versions of the Overdrive channels,” said Stevens. “The five-way footswitch will switch between all of the above, as well as all voice options for the Overdrive channels, reverb on and off, and a post-preamp six-decibel boost, which is available on all channels and voicings.”

The HT VENUE MkII also retains the original VENUE Series’ acclaimed Infinite Shape Feature (ISF) control, which allows users to adjust the tone stack between traditional American voicings and traditional British voicings using a single knob. “The patented ISF control works in conjunction with the Bass, Middle and Treble controls,” explained Stevens. “It allows the user to choose the exact tonal signature they prefer by sweeping between the sound of a traditional American tone stack voicing to a more traditional British tone stack voicing, and also being able to blend to anywhere in between.

“Although both the traditional American and British tone stacks are very similar at first glance due to the slight differences, component values, and the fact that they are passive and highly interactive, the resultant tones are quite different in the way they sculpt the tone of an overdriven sound,” added Stevens. “This is particularly apparent in the mid-range. Guitarists, as well as sound engineers, have commented that they like the continuously variable control — rather than a switch — as they can fine-tune this important mid-range area to their specific taste, or to better fit in a mix.”

Blackstar will be rolling out some marketing initiatives in order to spread the word about the new amp line. According to Joel Richardson, Blackstar’s head of marketing, “MkII will be supported with highly produced video demonstrations. We will also be bringing back the Everywhere’s a Venue campaign, but giving it an up-to-date twist.”