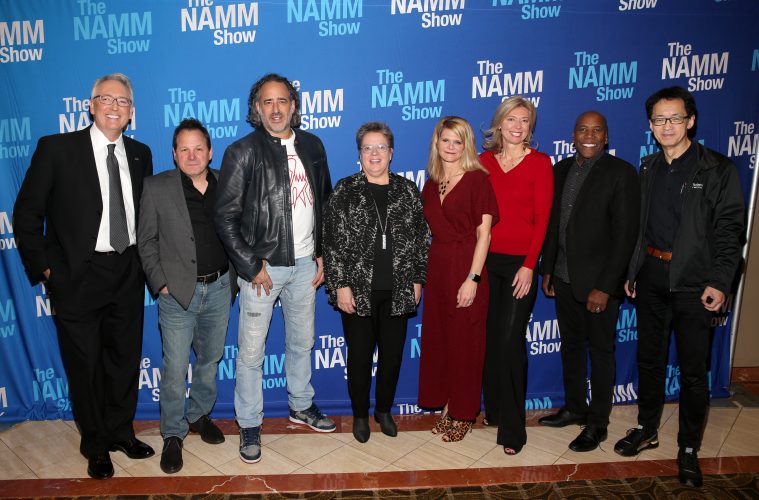 An increase is an increase. NAMM reported 115,301 registered attendees for The NAMM Show, 216 more people — or a fraction of a percent increase — compared to last year’s 115,085 registered attendees. But compared to a lot of industries that have seen trade show attendance decline, any increase is a positive. And let’s point out that 115,301 people is a lot of people. In fact, 115,301 people would comprise 34 percent of the entire population of the city The NAMM Show took place in, Anaheim, Calif., if such a comparison were made.

“We live in accelerated times in technological developments and global business and market conditions, and that can create unpredictability in any industry,” said Joe Lamond, NAMM president and CEO. “However, if you take a look around The NAMM Show, one could find many reasons to feel quite comfortable about the importance of music around the world and future of the music products industry. From the exciting innovations of our exhibiting members, the creativity of our retail members in finding enhanced ways to serve their communities, especially music educators, to the expanded live sound, lighting, and event tech professionals and companies who made the trip to Anaheim, the connections, business opportunities and education offered each the tools needed to succeed in the year ahead.”

There were many storylines at The NAMM Show. A large number of companies introduced innovative, if not game-changing, products. And of course, there was the return of Gibson to The NAMM Show after a one-year hiatus, this time led by an entirely new executive team. The company saw brisk traffic throughout the show. “The NAMM vibe goes way beyond just presenting your product. It’s about creating energy and moments for our Gibson players,” Gibson CEO, James “J.C.” Curleigh, told NAMM. “You create the memories, and they stay with people forever. It’s pretty exciting.”

Another highlight was the surprise announcement that Ed Sheeran launched a line of guitars with Irish-based Lowden Guitars. The Sheeran by Lowden brand was officially launched during an event on Jan. 23, before The NAMM Show opened. At launch, the Sheeran by Lowden acoustic guitar range features eight individual models across two small body sizes familiar from the Lowden range, known as the S and the Wee Lowden. The guitars have been designed by George Lowden.

“Working with our aerospace engineers has enabled us to dream up new ways of making a guitar very efficiently, using high-tech processes that are normally used in making aeroplanes,” said George Lowden. “We also incorporate our traditional methods including voicing all the struts by hand using Japanese hand chisels as we want the guitars to really speak to the player.” 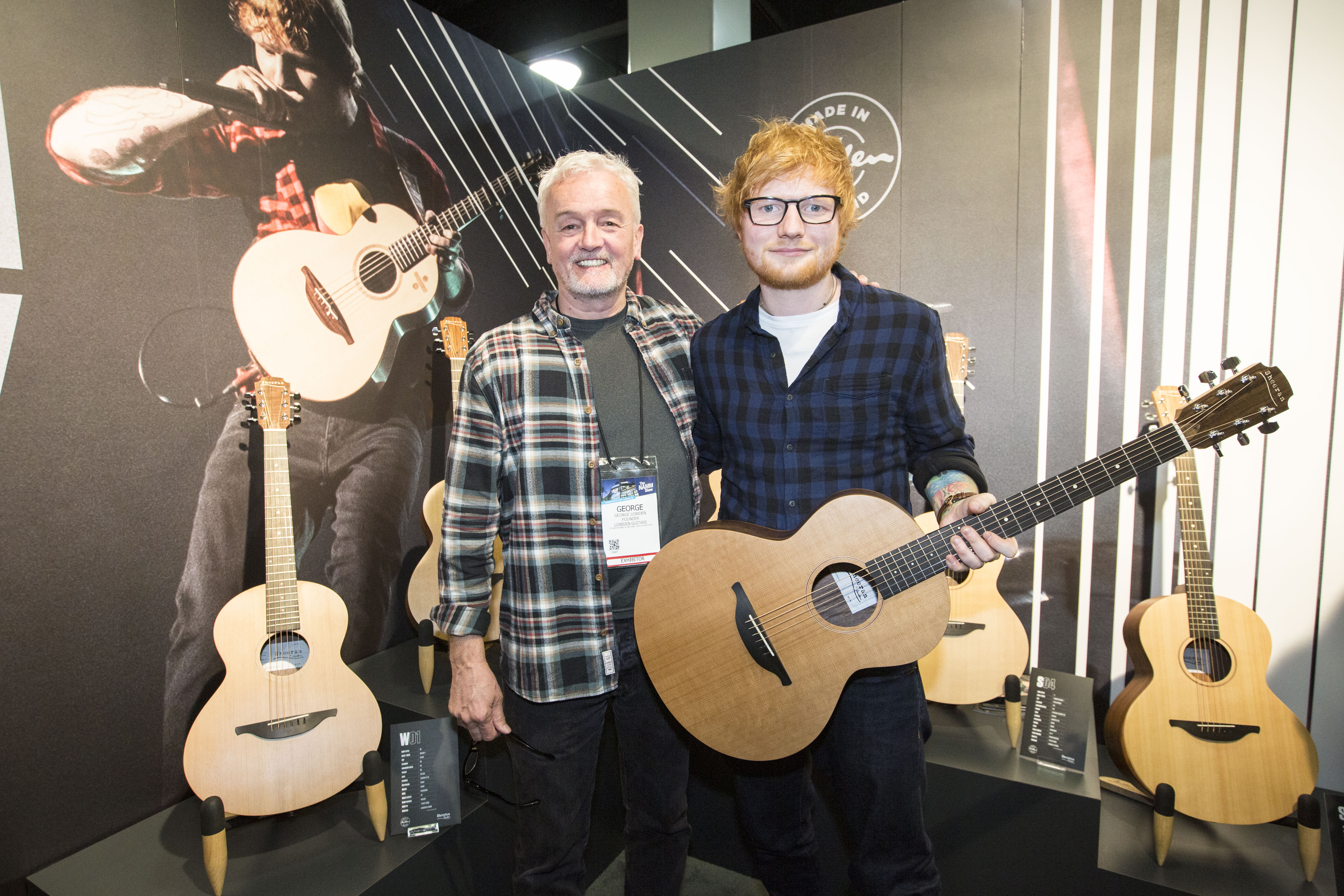 As always, the NAMM Breakfast Sessions were a key place for retailers to learn advice and get ready for that day’s events on the bustling NAMM Show floor at the Anaheim Convention Center. Originality was the theme of the Jan. 24 “Breakfast of Champions.”

Lamond kicked off The NAMM Show by calling it the “Crossroads” of the music, sound and event technology industry. He added the goal of the trade organization is to achieve a “changed human being.” “We want to help to succeed in the year ahead,” Lamond told attendees.

NAMM’s president and CEO subsequently brought out some industry stalwarts who have succeeded in any economic environment. Lamond stated he picked an originality theme because the “old world” is gone and a “new world” is coming to replace it, although it has not arrived yet. “But by being here, you are participating in this change and creating a new world every day. These guests today are originals and are helping define what this new world will look like.”

These originals are always in the “zone,” Lamond added. “I think [former New York Yankee] Bernie Williams said it best,” NAMM’s CEO said. “He said, ‘Joe, being in the zone is like walking up to the plate, facing a pitcher that you know throws a 95-mile-per-hour fastball, and being so focused and relaxed that what you really see is a beachball.’ And in the meantime, 30,000 Boston Red Sox fans are screaming for you to miss.”

The first guest to join Lamond on stage was Curleigh, who formerly served as president of Levi Strauss & Co. “You might have heard. [Gibson] went through kind of an obstacle course,” he said. “If you do go through an obstacle course, once you’re through it, you look back and say, ‘Let’s make it worth it.’ I told our team to take advantage that we are through this obstacle.”

Curleigh added both Levi’s and Gibson share in the fact they are iconic brands that needed to overcome obstacles. “There’s an old adage, ‘Whatever doesn’t kill you makes you stronger,’” he said. “People have asked me what the most surprising thing has been for me [at Gibson] so far. I think people have been looking for the ‘dark side’ answer. But so many people said to bring Gibson back to where it belongs. So, in some ways, it’s just this amazing journey in three months [since I became CEO of Gibson]. There has been so much support from artists, my team and the whole industry.”

Curleigh was followed by Jun-ichi Miki, CEO of Roland Corp., who said “innovation is the DNA” of the company’s success. He added all new products come from Roland’s engineering department, as opposed to its marketing team. “All of our engineers know how to create an instrument and communicate with the instrument. This is the secret of Roland,” said Miki.

To gain new music makers, Miki said Roland focuses on what it calls “sleeping musicians.” This includes going after students who may have previously played an instrument but stopped once they accepted a full-time job away from MI.

Certainly, an “original” is a new group founded by DeDe Heid of Heid Music, Crystal Morris of Gator Cases and NAMM Chairwoman Robin Walenta, called SWIM (Smart Women in Music). Walenta said the idea goes all the way back to 30 years ago, when she walked out on The NAMM Show floor and found few women. “It was at that moment that I realized we had an opportunity to make changes,” she said. “I took that opportunity very seriously and worked hard over the course of my career to not only advance myself in the company but give back to the industry as well. Through the SWIM initiative, we are giving other women like opportunities.”

Heid said her eyes opened when, during her first week at work, she was introduced as Todd Heid’s wife. “It’s not that I don’t appreciate being Todd’s wife. But I do have a degree. I did have professional experience prior that I was very proud of. I have a driving passion. For me, it was about freeing my path and showing that I wanted to drive our business forward and to be part of this amazing industry. So, for me with SWIM, it’s about how we evolve opportunities for women and make sure we are having these conversations.”

Heid added she has two daughters ages 11 and 14. “They have been told multiple times that their 6-year-old brother will take over operations and be the fourth generation of the business. [Our daughters] may not choose to be in our business, but I want them to know they have the opportunity to create the path they want. It’s not who they marry. It’s what they want to do for themselves.”

Morris grew up in the music industry, but after college, she didn’t know if she would end up back in the industry. “My road took some different paths. Nineteen years ago, my dad and I started our current company together, Gator Cases. At the time, as a young female, I would go into meetings and I felt I would have to work twice as hard to get credibility, and even then, sometimes I still would not get the credibility I was looking for. I never thought there was a difference between a male and a female going into a situation. So, when Robin [Walenta] approached me about this initiative, I couldn’t be more excited, because I knew that in that early stage in my career, it was really difficult to get to the next [level].”

Following the powerful SWIM conversation, the Breakfast of Champions switched gears to another “original,” Chris Gero, founder of Yamaha Entertainment Group (YEG), which presented the Jan. 25 Yamaha All-Star Concert on the Grand, featuring Jon McLaughlin, Loren Allred, Jonathan Butler, Sarah McLachlan and James “J.T.” Taylor. Gero was joined by Nathan East, music director for the All-Star Concert for a portion of the interview. Gero remarked that YEG’s goal today is to create a synergistic partnership with an artist throughout his/her career. The company determined it must become an important aspect of its artists’ lives and not just serve an endorser-endorsee relationship.

The Breakfast of Champions concluded with the presentation of NAMM’s 2019 Music for Life award to Nancy Wilson of Heart. “A guitar pioneer. A songwriting pioneer. A film composer. A Rock and Roll Hall of Fame inductee. And she has done so much for the cause of music making,” said Lamond.

Wilson recalled how it all got started for her. “As a kid, The Beatles happened. That was the lightning bolt that struck me and my sister Ann,” she said. “We were driven to have guitars, write songs, be in a band, get up on stages and ‘turn it up.’ We grew up as military brats, and we had a [work] ethic of ‘go get ‘em.’ We just went and did it.”

Editor’s Note: This is just a taste of our NAMM coverage. For much more, including a look at two other Breakfast Sessions, check out the March issue of the Music & Sound Retailer.