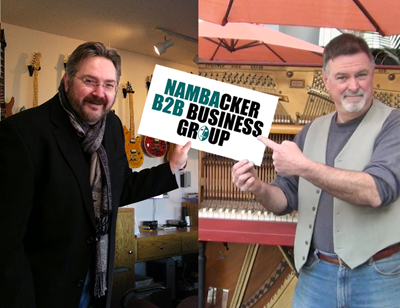 Namba Gear has announced the formation of NAMBACKER B2B, an MI manufacturer/distributor business-to-business networking group. Two industry veterans launched the network at the 2013 NAMM show. Woody Moran is Owner of Namba Gear, a bag and accessory company. John Maher owns Maher Marketing, a strategy and production company. The two first met 30 years ago and became good friends back in 1998 when Moran was M-Audio’s National Sales Manager and Maher was NAMM’s Director of Communications.

According to Moran, every other industry he deals with has well-established manufacturer business-to-business networking groups that help one another with product bundling, endorsers, seasonal promotions and business referrals. And while there are great mixer organizations in the MI industry like NAMM, GAMA, MENC, etc., nowhere is there a business network designed specifically for manufacturers and distributors. “Because a backpack is one of the most essential, yet non-competitive, products you can think of in the musical instrument business, it made sense that a backpack manufacturer would be the perfect choice to get the ball rolling in our industry,” he said. To that end, the name “NAMBACKER” was conjured, combining the Namba Gear name with the “got your back” aspect of a traditional B2B networking team. At the NAMM show, Maher recruited 33 exhibitors as the founding members.

NAMBACKER B2B founding members, according to Moran, were able to sign up for free at the show, with a small administration fee required for new members going forward. The founding member list includes a wide variety of product manufacturers, from traditional to high-technology, along with a great representation from music education manufacturers dedicated to developing the future market. NAMBACKER founding members are in the process of exchanging logos, company profiles and already sharing individual e-mail messages to learn more about one another.

Maher said the mission of the new NAMBACKER B2B Network is to “provide music manufacturers and distributors a platform where members can increase their business through constructive interaction that allows them to develop long-term relationships that matter.”